The writer, playwright, cartoonist is at it again. This time it’s Unprincess, her latest book for children. 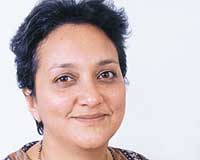 What do you think about the current state of Indian children's literature?
Better than it used to be.

Your favourite children's books?
I'm very fond of children's literature. There's a long list among which I can mention Kenneth Grahame's The Wind in the Willows and Lewis Carroll's Alice Through the Looking Glass.

What is Unprincess about?
Three short stories about three odd little girls.

How did you come upon the idea?
While thinking about the shortage of stories about odd little girls in literature.

What chances would Unprincess have against the Half-Blood Prince?
None whatsoever—it's silly to even mention them in the same context.

Both Mouse Attack and Mouse Invaders were written by a certain Manjula Padma. Was that you?
Yes. I shortened my surname for the UK market, where both these books first appeared.

Did you stop cartooning after Suki retired?
It's not like switching brands of toothpaste! If there was a market for...