Mandal For The Soul

A Sringeri for each caste. Quasi-political OBC maths are proliferating. 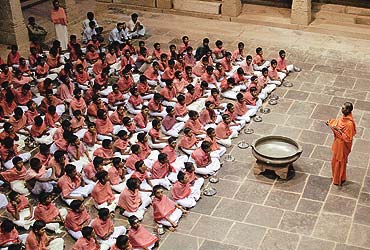 Everyone's heard about OBCs and reservations. But an OBC math, what's that? Well, in Karnataka the backward castes have begun to feel empowered enough to start their own religious seminaries. In fact, there are close to a hundred such maths now in the state with communities of barbers, dhobis, gypsies, goldsmiths, carpenters, basket weavers, cobblers, shepherds and cowherds all getting their own. A man from among them even acts as pontiff or 'jagadguru'.

It's a unique sociological phenomenon for until recently the maths were a preserve of the Brahmin or Lingayat communities. The backward castes swore allegiance to either a Brahmin math in Sringeri or to a Lingayat one in Hubli. But now they just borrow liberally from either the Vedic or Lingayat tradition to propagate their own ideals, preserve their own caste identities. Take pride in your caste—it's the new spin at these religious institutions.

Like the older, established maths, rituals and prayers are part of the daily routine here too. Clothing and feeding the poor from the community is another priority activity. But it's all geared to attract more members. And a registered religious outfit means easier allotment of government land. Journalist Mahadev Prakash, who has chronicled the growth of these organisations, says: "The idea of backward class maths was triggered by the success of the Vokkaliga outfit under Balagangadharanath Swamiji. It became a unifying element for politicians across party lines (Deve Gowda, S.M. Krishna are prominent netas from the community). It thus gained financial muscle and enormous political clout, and has now started educational institutions. The other backward communities, seeing this, decided to follow suit." The Kurubas (shepherd caste) were one of the first to realise a similar math would help them grow. Soon they started their own in Kaginele, triggering off the explosion in 'OBC' maths.

Incidentally, the Lingayat and Brahmin maths have been active in promoting their backward caste counterparts. Of course, allegiance and rumbles among their own have been issues. The Lingayat pontiff of the powerful 350-year-old Murugha Rajendra Math, Shivamurthy Murugha Sharanaru, went against the wishes of his own people to give out 'deeksha' (sainthood). Sharanaru was taken to court by his devotees but he won the case. 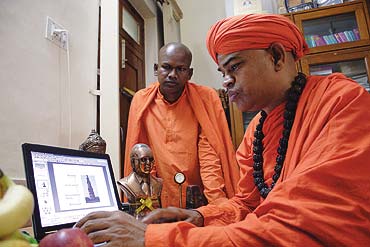 Today, around the Murugha Rajendra Math are outfits of the cobblers (Madara), gypsies (Lambani), dhobhis (Madiwala), barbers (Hadapa/Kshourika), basket-weavers (Medara) etc. The Murugha Math has given about 5-10 acres each to these communities to build their own establishments and has also started a school to train the new backward caste seers in matters spiritual. Needless to say, the new maths have pledged loyalty to the Sharana philosophy and worship the 'atmalinga'. Similarly, the Shivapuri Swamiji of the Omkar Math has aided the setting up of the Vishwakarma math (goldsmiths, carpenters, sculptors etc), the Kuruba math (shepherds), Devanga math (weavers) and the Valmiki math (forest dwellers). These subscribe to the Vedic tradition, even perform yagnas.

Madara Chenniah Swamiji dwells on the political compulsions behind setting up the maths: "There are about 60-70 lakh Madaras in Karnataka alone. Our population is the same in some other states. We want constitutional rights and reservation proportional to our population. It's the prime goal of our math." Chenniah Swamiji is an ex-journalist and was reluctant to play the pontiff's role initially but says he had to think of the "community's interest". His contacts now include politicians from his ilk, including Union minister K.H. Muniyappa.

The Medha community's Ketheswara Swamiji has gone a step ahead, he's already busy networking in the southern states. "We have a decent population in AP, Tamil Nadu and Maharashtra. In November we plan to organise an all-India meet in Hyderabad which will be inaugurated by chief minister Y.S.R. Reddy," he says. K.P. Nanjundi, representing the Vishwakarma Math, expresses similar aspirations and anxieties: "It's only a math that can bring and bind common people together. Nothing else will work."

Prof Narendra Pani of the National Institute of Advanced Studies puts things in perspective: "On the one hand, these maths came into being because there's a need within the political system for them, in terms of gaining political clout, financing polls etc. On the other hand, setting up a math is a means of modernisation and mobilisation. The traditional hierarchy of caste has broken down, by creating maths they are moving away from its inbuilt ambivalences."

Still, it's not as if there's zero discontent. For instance, in 2005, there was a face-off between the Brahmins and Kurubas when the tower in the Udupi Krishna temple's precincts was razed to the ground. But they had to find common ground again because though administered by eight Brahmin maths, the temple's popularity rests on the visit to Udupi of the 16th century saint and composer Kanakadasa, a shepherd.

The other controversy brewing has been between the backward castes and Lingayats over the caste origins of 12th century social reformer Basaveshwara. A research work published in April '07 claimed that Basaveshwara, who renounced his caste and tried to build a casteless social order, originally hailed from the low-caste Madara community. The higher sects within the Lingayats are protesting this "distortion".

Ex-CM Veerappa Moily, who oversaw the drafting of the new reservations bill, is loath to the idea of OBC maths: "They create caste islands. When we give reservations to castes, we look at socio-educational backwardness, not even economic backwardness. So why should spiritual backwardness become an excuse? We should not get together to sharpen the caste divide. I am against institutionalising caste. Maths should keep away from all this." Moily may object but with the evidence on offer, there's no going back on the institutionalising bit.