Mama's Boys, Is That Them?

Avid newspaper readers seeking exclusive tidbits may be disappointed but the book does more than rehash the numerous articles that have appeared on Reliance. 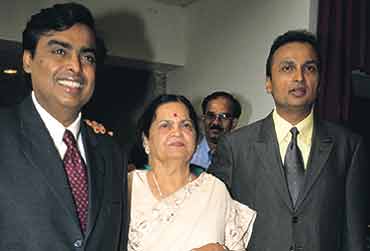 At least three books have been published over the last 20 years about India’s first family of businessmen, the Ambanis. The first by S.R. Mohnot was somewhat prosaic and academic in its style and content. Polyester Prince written by Hamish McDonald was a racy compilation of facts, most of which had appeared in newspapers like the Indian Express. For reasons best known to the Ambanis, this book is not available in India though quite a few photocopied versions are in circulation.

Alam Srinivas has filled a gap in the current literature on the Reliance group by writing this quickie about the brothers within weeks of their decision to bury the hatchet after a debilitating dogfight that at one stage had threatened to cripple the country’s biggest privately-controlled corporate conglomerate. The empire Dhirubhai Ambani built from scratch during his lifetime was torn asunder barely three years after his demise.

Srinivas, unlike most journalists writing on the Ambanis before the rivalry between Mukesh and Anil became public, has not been reverential towards...