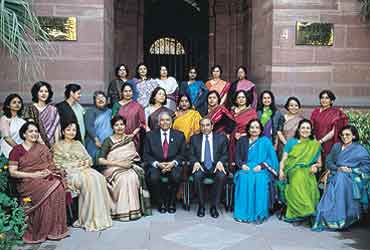 outlookindia.com
-0001-11-30T00:00:00+0553
The credo of gender-neutrality has at last reached full bloom in the musty corridors of South Block, where men were always on top and kept the ball rolling in affairs foreign in nature. Circa 2004—more than three decades after women burnt their bras and stepped out of cloistered social environments to claim their legitimate right—the impenetrable Indian Foreign Service is seeing the whole Shebang corner coveted posts and call the shots. Just a glance at the figures:


It's something unprecedented in the annals of the ministry. True, an odd woman has been on top here and there. There was Chokila Iyer who was appointed foreign secretary in December 2000. And the multi-faceted Nirupama Rao who prompted scribes to use the umbrella coinage 'spokesperson' instead of 'spokesman' when she was appointed to this post in 2001. Before them, the misogynists in the MEA would cite the example of Vijaylakshmi Pandit to argue that there wasn't a glass ceiling for women officers. Wasn't Pandit India's first ambassador to the USSR; didn't she head the embassy in Washington and the High Commission in London? But then Pandit didn't belong to the IFS. And though accomplished, few can contest that she was helped by the fact that her brother was Jawaharlal Nehru.

But a lone Pandit couldn't quite bolster the MEA's claims to gender equality or sensitivity. The story, till the recent past, was just the opposite: they didn't even make it to secretary level, mission heads abroad frowned every time women were posted under them, and they were assigned jobs in forgotten parts of the world or given tasks of low priority. Women diplomats recall that in the '70s there wasn't even a separate toilet for women in the MEA.

All that has changed. Women now head Indian missions in 12 countries—Canada, France, Sweden, Thailand, the Netherlands, Yugoslavia, Colombia, Portugal, the Philippines, Panama, Ethiopia and Cote D'Iviore. Add to the list Veena Sikri, who heads the mission in Dhaka, the first woman to do so in the neighbourhood. You now also have Nirupama Rao as the first foreign service inspector; you have Mira Shankar looking after the country's anti-terrorist policy; and you have Sujata Mehta manning the Americas desk.

Really, it has never been like this before. One former woman official says that back in the '70s they could take nothing but prejudice for granted in the MEA. Then Jagat Mehta was foreign secretary, and three of the four eligible women IFS officers were posted to Africa (Ghana, Guinea and Nigeria), universally considered hard postings. Ironically, it was from here that the first blow for women officers was struck: Ambassador C.B. Muthamma in Ghana, the first woman IFS officer, received a letter from Mehta declaring that he did not find her meritorious enough to be promoted to the secretary grade.

Muthamma dashed a missive back asking Mehta to spell out his method of assessment. No reply came. Muthamma told Outlook, "When then foreign minister Atal Behari Vajpayee came to Nairobi for a conference, I asked him how merit was assessed in the system and also warned, 'If you don't tell me, I'll go to court.' Vajpayee said, 'No don't do that.'"

She did go to court. Several adjournments later, the case came up for hearing before the bench of V.R. Krishna Iyer. Muthamma recalls, "The court issued notice to the ministry and it lost its nerve. It said: 'She has been empanelled.'" The court dismissed the petition. But not after making a scathing remark: "What we do want to impress upon the government is the need to overhaul all service rules to remove the stain of sex discrimination, without waiting for ad hoc inspiration from writ petitions or gender charity. We dismiss the petition but not the problem."

Muthamma's tribulation and triumph have no doubt contributed to women moving up the hierarchy. Indeed, foreign minister Yashwant Sinha told Outlook: "There are no glass ceilings here, we have already had a women—Chokila Iyer—as foreign secretary. We are trendsetters—no question about that. Our women diplomats have better career prospects than women in foreign service in many other countries, including western countries."

Sinha has a point: the country hasn't had a woman as cabinet secretary or home secretary or defence secretary. But then you could say women haven't been posted to Islamabad as ambassadors nor to Berlin or Tokyo or Colombo—the list could go on. Partly the problem is that they comprise only 13 per cent of all IFS (a) officers. But the doors to the top have opened, and the misogynist is in the corner wringing his hands in dismay. He knows he has lost the battle.