The STAR-NDTV marriage is on the rocks, threatening to change the face of newsmaking in the subcontinent 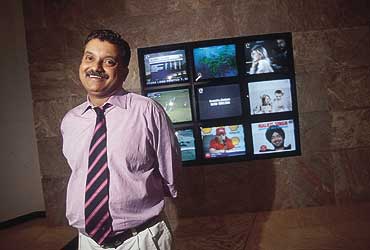 outlookindia.com
-0001-11-30T00:00:00+0553
Days before media tycoon Rupert Murdoch and his son James landed in Mumbai to supervise News Television India operations last week, an internal memo from a senior Hong Kong-based STAR executive hinted at the undercurrents. Among other things, it reflected on the current relationship between the Star News channel and its content provider NDTV, and the need to review the same, especially two of its most crucial issues—editorial control and the $15 million a year that STAR is paying NDTV.

The note reflected on the growing need of Star News to have complete editorial control, ostensibly because news—especially after 9/11—was also seen as an important revenue earner for the channel as compared to serials, game shows and soaps. It referred to the fact that earlier news watching was habitual and the time spent on it relatively low as compared to soaps and serials. But now the concept of anytime news was catching up. Hence, it was important to have direct control on the channel's news operations, the note added, in a politically sensitive country like India, especially after South Asia has become the world's focus.

The contents of the note, expectedly, made many sit up and take notice at NDTV, whose contract with STAR expires in March 2003. NDTV claims that two years ago, James Murdoch—during a closed-door meeting with Prannoy Roy—had explicitly mentioned that the channel had no interest in supervising editorial issues. At that point, NDTV had even offered a group of ombudsmen comprising corporate captains like Ratan Tata and N.R. Narayana Murthy to check complaints, if any, against Star News' reportage. But Murdoch apparently said that editorial content was purely NDTV's headache. As for the financial aspects of the contract, a top NDTV official claims that two international investment bankers, DSP Merrill Lynch (for STAR) and Goldman Sachs (for NDTV) had almost agreed on the post-March 2003 package that was more or less the current amount.

But today, both sides are contemplating new alignments which could significantly alter news and current affairs programming on satellite television in the subcontinent. "The marriage has not broken up yet but the relationship is definitely under serious discussion," says News Television India CEO Peter Mukherjea.

What then are the options for STAR? According to sources in News Television India, if NDTV refuses to give up its total editorial control on the channel, they could be:


Expectedly, NDTV is working out its options as well.One is a possible joint venture with Zee Telefilms and CNN, whose global head, AOL-Time Warner CEO Gary Levin, visited India recently. If it fructifies, the move could yield a new company in which the three will have stakes. But again, Zee is not willing to give full editorial control to NDTV and is also insisting on a majority stake in the venture. Besides, it's reliably learnt that CNN is not keen to immediately launch a 24-hour news channel specially focused on South Asia.

"Alignments and re-alignments are part of today's business realities. But it's premature as yet to confirm any such tie-up," Zee's CEO Sandip Goyal told Outlook. Senior Zee officials defended their insistence on having a majority stake in the venture by pointing out that Zee is a listed company with strong nationwide and global operations in news infrastructure. "At present we are aggressively pursuing news on Zee News and all our six regional channels. News is and will always remain an important viewing genre."

The second option for NDTV—whose estimated profits for 2000-2001 was around Rs 27 crore on a Rs 87 crore turnover—is its own channel. The promoters—who planned a share issue a year ago but shelved the idea due to poor market conditions—are not averse to testing the waters now, ostensibly to garner funds for a transponder for the new channel that will be launched in April next year and have a mix of both English and Hindi content. At the same time, NDTV will continue doing programmes for other channels like STAR, BBC and Zee. The key issue that NDTV will have to solve then is marketing. NDTV has never sold advertisements (that was STAR's responsibility), and it has to set up a large and effective sales and marketing team from scratch.

"In all probability, the deal is off. But then, editorial control is the core issue of the contract. We cannot allow even a foot through that door. Even the list of people suggested as ombudsmen did not have anyone from STAR. But their continued insistence on editorial control is difficult to understand," says the NDTV official. He adds: "We're talking to a number of channels. But if we are not satisfied, we will have our own channel by the end of March. And we have everything in place for that."

But raising finances may not be so easy for NDTV. Currently, the software house—besides exploring the share issue route—is also seeking options of raising funds from corporates through internal debt placements. Sources claim NDTV officials have been in negotiations with the Aditya Birla group.

As for the growing dominance of Hindi news bulletins, NDTV officials remain unperturbed and claim such shows continue to garner low-cost advertising despite high viewership TRPS. "In print, English language dailies and newsmagazines have a mere 17 per cent countrywide reach. But the ad revenues are 65 per cent as compared to 35 per cent of all regional dailies, Hindi included. We're not unduly worried," the official said.

The stage is set. And it's an acid test for both. For STAR, which has to prove that classy news in India can be handled without Roy and his team. And for NDTV, which has to find a platform for its news. And also for its stars.