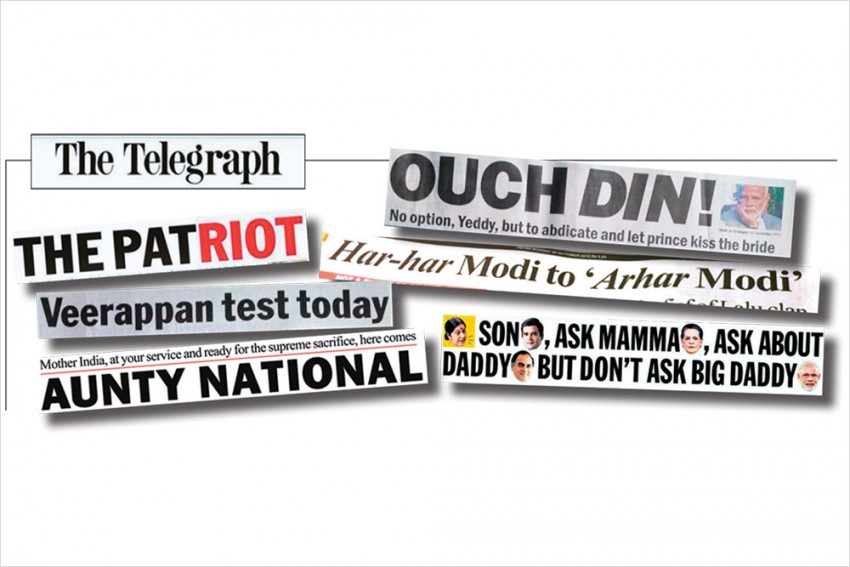 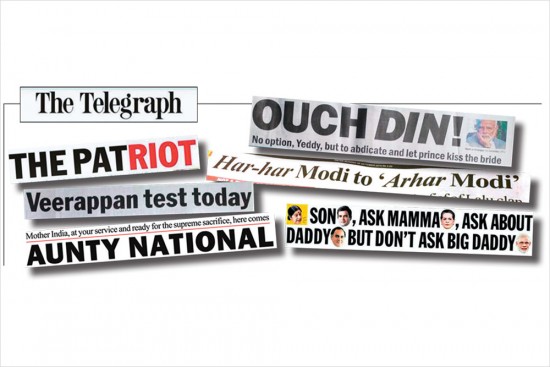 Nationwide front page headlines of print and digital media—studded with photos of BJP, Con­gress and JD(S) leaders—cried hoarse about fears of ‘horse-­­trading’ after the results of the Karnataka state elections decl­ared a hung assembly last week. Readers of The Telegraph in Calcutta and other eastern cities woke up to a startling sight on its front page on May 19—a four square column photograph of the forest brigand Veerappan, his moustache twirled in defiance, the brown belt of his AK-47 slung over his left shoulder. ‘Veerappan Test Today’, leapt out the accompanying headline, drawing a bold parallel between the smuggler of animals with the kind of ‘poaching’ prevalent in Indian politics. “Nearly 14 years after the death of the Karnataka-born brigand who hunted elephants,” read the caption, “Veerappans in whites are said to be on the prowl to poach MLAs.” The next day, when BJP’s Yeddyurappa resigned, the front page loudly exclaimed ‘Ouch Din’, choosing to pair that story with a picture of the royal wedding at Windsor castle. the unifying strap­line: “No option, Yeddy, but to abdicate and let prince kiss the bride.” The Telegraph was probably trying to live up to what seems its ideal about headlines—provocative, witty, campy, often aud­a­cio­usly over-the-top, always eye-catching.

“The idea is to be catchy,” avers Tarun Ganguly, former bureau chief at The Telegraph. “Such headings are associated with tabloid journalism than  broadsheets. However, since they are more ‘fun’ they are preferred by some news-editors.” Though Ganguly, who once headed the newsdesk since The Telegraph’s inception in 1982 himself avoided ‘sensational’ headings, he feels they do stand out.

No market survey has shown that ‘creative’ headings lead to greater circulation and revenue.

The words ‘Aunty National’ stared back in large bold fonts along with a photo of then Union HRD minister Smriti Irani from the front page of the newspaper’s February 25, 2016 issue, ostensibly taking a swipe at her ‘insensitive comments’ on the suicide of Rohit Vemula and conflating it with the perceived know-it-all attitude associated with the stereotypical ‘aunty’. All this while punning on her party’s branding any rival an “anti-­national”. While the headline did its work—it became a national talking point—it was rou­ndly criticised for being flippant, misogynist and sex­­IST. Packed with inn­uendo and punchy parody, Telegraph’s (often lab­oured and affected) hea­­­­d­­­­lines convey the news­­paper’s points of view.

“These headlines started when Aveek Sarkar was editor-in-chief,” says a former editor of The Telegraph. “He preferred the shock-factor to the staid and thought these would...have more impact.”

The media baron was, according to his closest associates, inspired by the ‘classy casualness’ of certain Western publications which eschewed standard journalistic protocol for effect. One oft-quoted example of this  school of headlining is from the April 15, 1983 issue of the New York Post: “Headless Body in Topless Bar”.

“There was no in-house style policy about headings,” says Ganguly. “I preferred not to editorialise in the news pages...but there was never any pressure to change that.”

But 40 years after ‘new’ and ‘gonzo’ journalism, many baulk at such strict adh­erence to journalism stylebooks. Former Telegraph news editor Dipayan Chatterjee says editorial comment in news pages, if it happens at all, should be fact-based.

But do ‘creative’ headlines, as opposed to ‘straight’ ones, lead to greater circulation? The Telegraph vice-president Dhr­ubo Mukherjee says there are no ind­­icative market surveys. “The editorial team does not work in collusion with the business side. The headlines are decided by the production desk people and it is their discretion. We gauge responses in the market and find that certain headings have created an impact.”

The Telegraph newsdesk declined to comment on their “gems”, as one of them called them. A former employee attributed them to the brilliance of current editor R. Rajagopal. The nation’s readers keep their eyes peeled for the next salvo on The Telegraph; their wordsmiths sit ready, hammer and chisel in hand.

The Rape Nobody Cares To Talk About