Saurav Ganguly's poor recent form tempts us to forget the symphonic joy of the Prince of Calcutta at his most elegant. Or the heavy metal assault of the Bengal Tiger in a fast and furious mood. Ten reasons why you shouldn't succumb to that temptati

July 1996/136, 3rd Test vs England, Trent Bridge, Nottingham,
Two Test innings; two centuries. It had to go downhill from here, but this innings confirmed the surgical steel-through-butter genius of his offside play and that Lord’s was no flash in the pan.

Jan 1998/124, Independence Cup final ODI vs Pakistan, Dhaka,
Highest one-day score to date helped India chase down 316 to win, at the time a world record. Ganguly walked off with both man of-the-match and man of-the-series prizes.

May 1999/183, World Cup ODI vs Sri Lanka, Taunton,
When the world first saw the spectacular sight of the Ganguly overdrive; his last 83 came off 38 balls, with six 6s. Three balls were lost entirely. Sri Lanka might as well have tried to block a waterfall with teaspoons. 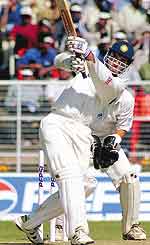 Nov 1999/153*, 3rd ODI vs New Zealand, Gwalior,
Annihilation. Traumatised Kiwi bowlers with frightening hitting. Unleashed his usual repertoire, and then pulled out a bagful that were entirely unknown to cricket. Last 53 runs off 23 balls. 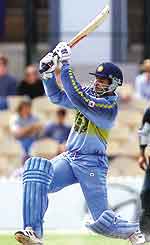 Jan 2000/141, Carlton & United ODI vs Pakistan, Adelaide,
India had been having a miserable series until Ganguly unfurled one of the all-time great OD innings to help his team to a rare win. No one even came close to his score of 141 on a true pitch against good bowling. Mar 2000/105*, 2nd ODI vs South Africa, Jamshedpur,
A match-winning knock in a low-scoring game where only one other player made it into the 40s. A classic middle-period Ganguly innings; not lightning fast, but nine 4s and four 6s testifying to his ability to penalise the bad ball.

Sep 2002/117, ODI vs England, R. Premadasa Stadium, Colombo,
Better remembered for Sehwag’s pyrotechnic century. But once he was out Ganguly accelerated, his last 30-odd runs coming at almost 2.5 runs a ball. Sadly, the last time we’d see him go pedal to the metal against real opposition. 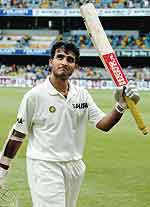 Nov 2003/144, 1st Test vs Australia, Brisbane,
The world’s best team went for his throat on a pitch they love. He slapped them right back for a 196-ball 144, a great Test innings and a captain’s knock—saved the match and laid the base for India’s later successes in the series.

Look Who Is Cracking The Whip Now!