Is the Spanish vote really a surrender to Al Qaeda? Listen to the Global Right. Updates 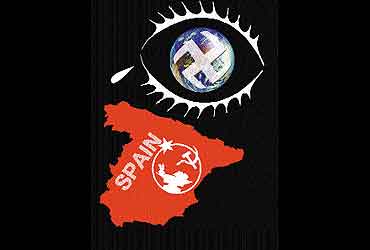 What provoked the Global Right to expose its authoritarian face to the rest of the world was the spasm of rage and grief among especially young voters in Spain that made them throw out the reactionary regime of outgoing Prime Minister Jose Maria Aznar, and vote in a socialist government headed by Jose Luis Rodriguez Zapatero. Zapatero had campaigned on a pledge to withdraw the 1,300 Spanish troops sent to Iraq in token support of the invasion, but opinion polls just ahead of the elections had given Aznar's Popular Party a 4 per cent lead over the Socialists. It was the sudden reversal of this prognosis, and Zapatero's candid description of the Iraq misadventure as a disaster built on lies, that infuriated the Global Right. And as often happens, anger has made it reveal far more than it intended to.

Edward Luttwak, a conservative columnist, wrote in the New York Times on March 16, "...it must be said: Spanish voters have allowed a small band of terrorists to dictate the outcome of their elections." This is a broad enough statement to be a tautology, but Luttwak had something much more specific in mind, for he accused Zapatero of validating the crudest caricatures of "Old European cowardly decadence". This is language worthy of Donald Rumsfeld. David Brooks, another columnist writing on the same day in the same paper, accused Spanish voters of "shamefully trying to seek a separate peace in the war on terror", and asked, "What is the Spanish word for appeasement?"