Moon Moon Sen has only her ample, innocent charm to offer Bankura 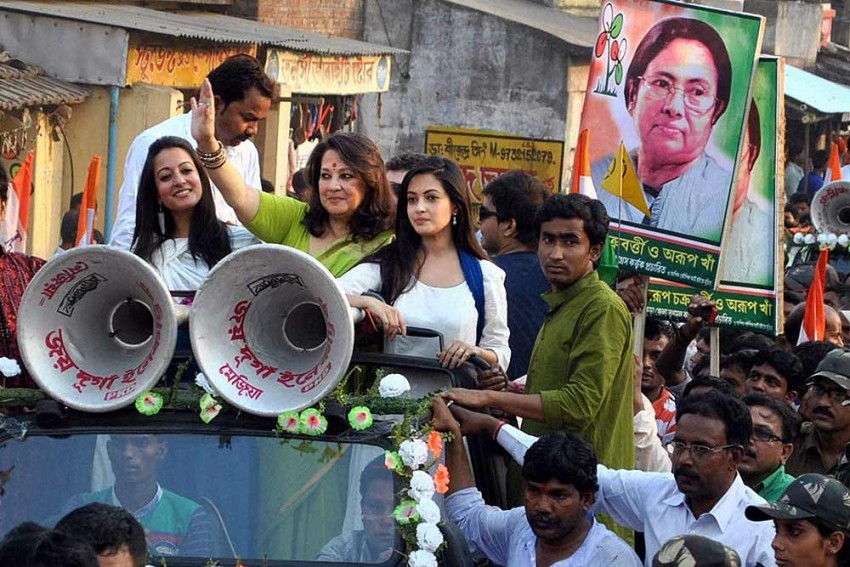 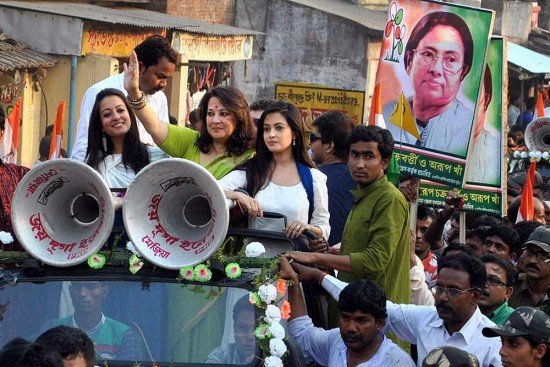 Tall, still glamorous and a trifle embarrassed about her fluctuating ‘weight’, Moon Moon Sen has decided to stun the sun with a cool, off-white chiffon saree. A pearl necklace is conspicuous. Her heyday in Bengali films long over, she is now better remembered as Suchitra Sen’s daughter and for the actor who elevated the word nyaka—Bengali for coquettish—to new levels of loaded meaning. But if you’re on the campaign trail of the Trinamool Congress’s Bank­ura candidate, you realise how people are infatuated with her starry lights.

She is a sensation in the boondocks that is much of Bankura district. It helps that she also tries very hard to be friendly. “Ami apnader shongey achhi (I am with you),” she says earnestly. “Amar opor ektu bhorsha rakhoon (Please have faith in me),” she implores, drawing out the syllables in her usual affected manner, as she would in her films. Her mostly rustic audience loves it, cheering and clapping lustily. “Rakhbo (I will),” shouts back a young boy cheekily. His sister-in-law slaps him playfully. “Shut up, she’s your mother’s age,” she chides. Then she admits to liking Moon Moon, “who is such a big star”.

They converge from surrounding areas to have a gander at the diva, the ‘heroine’ they were told had come calling. If the star could brave the merciless sun, who were they to complain? So they have walked miles from their vil­l­ages to the maidan—the site of her rally.

Even in this arid, impoverished part of ‘Jangalmahal’, people flaunt their cellphones and try taking photographs of any city woman in sunglasses they can spot in the convoy carrying Moon Moon, who is taking on veteran parliamentarian Basudev Acharia of the CPI(M), who has won the Bankura Lok Sabha seat nine times in a row. But neither Acharia nor the CPI(M) is visible in Bankura—a bastion of the Left till recently—where a Mamata-Moon Moon wave is said to have swept ever­ything else. Vital issues are an afterthought. Yes, there’s acute water sca­r­city, and roads are bad. But none of that seems to matter. The crowd eagerly awaiting a glimpse of the ‘heroine’ has little time to consider Acharia’s ‘good work’ in delivering hospitals, bridges and rail links.

“She’s such a big star and it’s so nice of her to have come down to our land,” gushes Barnali Sheshal from Mandal Kuni village. She has never seen Moon Moon in any movie, Barnali admits. Nor has she ever seen a photograph of her.  “But in the village word spread that a ‘heroine’ is coming, so we all wanted to come.” The diva’s off-white chiffon has bold tiger print; her long hair is loosely held together by a single red rose. The women in the crowd, in their crushed cotton sarees and their hair tied tightly back in oily buns, are in awe. But are they aware that the MP they elect helps make laws, represents them and is supposed to be a ‘public servant’? The men, women and children laugh as though the question is a joke.

Moon Moon’s mother, the famously reclusive Suchitra Sen, had once confided to actor Soumitra Chatterjee about the importance of a star keeping a little distance from the masses. “They should get the feeling that you eat off a golden plate,” she had said.

A golden plate isn’t proffered for the public to gape at, and Moon Moon’s lunch is invariably light and plain—bhetki fish fries (a favourite) along with rice and dal. Moon Moon’s husband belongs to the Tripura royal family and one of his aunts is Maharani Gayatri Devi of Jaipur. They live in a spacious flat in Calcutta’s upmarket Ballygunge Place with a terrace that covers 6,000 square feet and has a temple built in a corner. But she appears to be enjoying her new role of a wannabe MP. She is not really a stranger to villages. She has performed in numerous ‘jatras’—the popular folk theatre form of Bengal—and knows how to move the audience to tears and ecstasy. She tells the crowd how much Didi (Mamata Banerjee) cares for the people. And she tells them how much she herself cares for Didi. In fact, her reasons for joining politics, she said, had to do with Mamata constantly being by her mother’s side when she was in hospital during the great star’s final days.

“I’m not a politician, thank God,” she tells me. But she seems to regret her not campaigning from house to house. With Bankura designated as a “Maoist-affe­cted” area, she is whisked away by security guards soon after a rally. In the afternoon, she heads to the hotel for lunch and a siesta. As the sun drops its glare and temperatures cool, she emerges in a cool blue saree for the evening engagements. Dau­ghters Raima and Riya, both actresses, have campaigned for her but, says Moon Moon, “They don’t like to come often, saying it’s too hot. But they love Didi and they’re always willing to go along when she asks.”

The evening rallies are followed by a song-and-dance session to showcase local talent. As darkness falls, the crowd starts to thin. “You have had a look at her, now let’s go back home. You have to cook dinner,” a young woman is admonished.

It’s a full-moon night. As the convoy heads back to the hotel in the silver light, people on either side of the road stop, smile and wave. It takes little to make them smile.

Welcome To The Prom