Taj is one of Hyderabad's oldest restaurants, known for sixty years for its tiffins and frothy cups of what was called 'l-o-o-o-ng coffee' 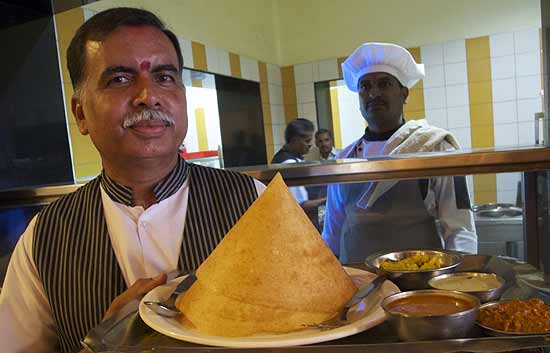 Taj is one of Hyderabad’s oldest restaurants, known for sixty years for its tiffins and frothy cups of what was called ‘l-o-o-o-ng coffee’ (because of the height it was poured from). It was one of M.F. Husain’s haunts, and I occasionally bumped into him here. Once, I remember, I introduced him to the house speciality of tiny ‘button idlis’ swimming in a bowl of sambar (he initially heard me wrong and protested, “Arre baba, mutton idli nahin, veg idli chahiye”). Despite his celeb standing, Husainsaab was easy to talk to and, over Taj’s crisp Mysore masala dosas, we chatted about favourite Hollywood icons like Humphrey Bogart and Hitchcock. He also confessed his admiration for Walt Disney: in the 1940s he had apparently worked for a Mumbai furniture store, painting children’s furniture with Walt Disney characters. Once, as we chatted, a canny couple at the next table sent their little daughter with a piece of paper to ask Husain to do a drawing for her. He put the paper away and instead did a drawing all the way up the girl’s arm with his felt pen. I wonder how the parents felt when they gave her a bath and washed away their valuable M.F. Husain original!

Taj once occupied the historic 120-year-old Viccajee Mansion, but popularity has pushed it into a bigger annexe next door. Its tiffins are still good, but just one complaint: the new generation of staff no longer understands what ‘l-o-o-o-ng coffee’ is.