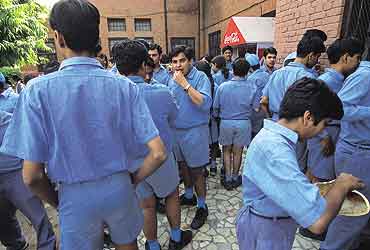 outlookindia.com
-0001-11-30T00:00:00+0553
This is one Supreme Court judgement that is bound to change the face of private school education in Delhi and possibly the entire country. In a bid to check the commercialisation of education and ensure that private unaided schools do not renege on their social obligations, the apex court delivered a three-pronged verdict earlier this week. First, it stipulated that all recognised private unaided schools in the capital have to reserve 20-25 per cent of seats for children from weaker sections of society. Second, it has mandated that schools cannot increase their fees without the prior approval of the Directorate of Education (DoE) of the Delhi government. Finally, schools are now bound to make their financial accounting processes more transparent and prove they are non-profit institutions.

"This was done in order to promote integration of rich and poor sections of society and to drive home the fact that an educational institution has a social obligation to fulfil," says lawyer Ashok Aggarwal, who was part of the group that filed a pil on this matter in the Delhi High Court in 2002. Petitions such as these led the high court to eventually pass a judgement this January which has now been reiterated and upheld by the Supreme Court. Although the Supreme Court judgement was given in the context of Delhi's schools, it has an all-India implication. Any state choosing to enact a law to stem the commercialisation of education now has a precedent. In fact, Aggarwal, who has filed two similar petitions on behalf of parents' associations in the Punjab and Haryana High Court, says the verdict will give a fillip to these cases.

Representatives of private schools express a range of reactions—opposition, doubt, worry, acceptance. "While we accept the judgement, there are several questions," says Jyoti Bose, chairperson of the National Progressive Schools Council (NPSC) and principal, Springdales School (Dhaula Kuan). "Who will pay the cost of free education? Do we ask parents of those students who pay fees to undertake this burden? And more importantly, where do we go looking for these children?" she asks. Agrees Annie Koshi, principal of St Mary's School: "While the inclusionary policy is good, governments may have to subsidise private schools in order to achieve the target of free education for 20-25 per cent students."

While the DoE is still working out the modalities of implementation, officials say the department will go on a popularisation drive to let all parents know of the new law. "Parents with a monthly income of less than Rs 4,000 will qualify for the reserved quota," says a DoE official.

Private unaided schools, however, are upset at the court's decision to give the DoE the power to check increases in tuition fees. "We are constrained to charge students for a reasonably good standard of education," says Deepak Sen, secretary of the Tagore Education Society, which runs the Tagore International School. According to the verdict, schools can only invest in capital expenditure from surplus funds; and they cannot transfer funds from the school to the parent society.

The overall sense of disgruntlement stems from the feeling that the local government is riding piggyback on the success of private institutions. "Private schools were meant to supplement the educational system," says Bose. While the ideal system would have a mix of state-run and private schools that offer a uniform standard of education, private schools have become the reluctant heroes of progressive action.