A peek behind the chrome-and-glass exteriors of PwC, the auditors of Satyam, currently under investigation 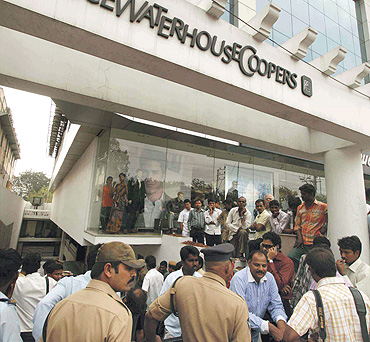 outlookindia.com
-0001-11-30T00:00:00+0553
Here's one for the New Age management gurus to chew on: size doesn't matter. PriceWaterhouse, the auditor of scam-ridden IT company Satyam Computer, is part of a global PriceWaterhouseCoopers organisation with billions. Ever since Satyam's founder Ramalinga Raju confessed he cooked the books to the tune of Rs 7,200 crore, opaque walls have risen around PwC's Blackberry-wielding partners. Privately, there's caution mixed with bluster ("come check us out, we're clean," is the broad message). Publicly, the firm has claimed it didn't sniff out the scam—but has understandably not made that PowerPoint presentation to prove it.

Globally, PwC is a major brand. Even in India, it is no minnow, with 5,000 employees, 400 partners, offices in nine cities and around 40 bluechip clients. Known as India's oldest consulting business firm—PwC first landed on our shores in the late 19th century—it could be a sign of how age and pedigree doesn't matter either.

Much could change for PwC as part of the Satyam fallout: For starters, clients may want distance. PwC's client roster includes MNCs like Bayer, Bosch, Colgate-Palmolive, Glaxosmithkline and Novartis. Its list of homegrown companies include: GMR, Lanco, Reliance Infra, Reliance Power, United Breweries (now UB), United Spirits, Max India, HCL, Info Edge, Mastek, Moser Baer and NIIT. Many of these firms have had long associations with PwC, and there's no run on the auditor until "the air is cleared". 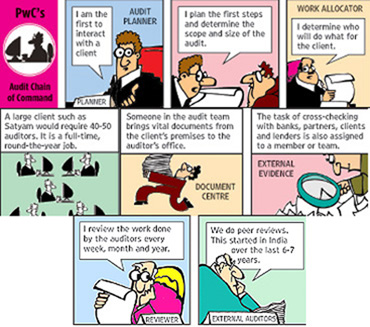 Small businesses who feel they need the golden "audited by PwC" stamp may jump ship first. The CEO of a mid-sized company that's currently audited by PwC calls its army of pinstriped consultants, many of them fresh-faced B-school graduates, "arrogant, very proud of who they are". "Certainly, we won't do business with them (in future). They charge three times the fee that other audit firms bill. I wanted the PwC stamp. Now that the stamp is suspect, why not go for Sharma & Sharma?" he says, not wanting to be identified.

An executive from a rival firm says a 'junior-middle manager' in a large firm like PwC makes Rs 12-15 lakh per annum after five years' workex. "It's not as much as an investment banker makes, but it's not bad," he says. The value of money may well be relative, but the salaries of auditors has raised the pitch against PwC. "What are they getting paid for if they can't get it right?" says Prof Rajesh K. Aithal who teaches business ethics at IIM Lucknow. "If they claim ignorance of what went on, at Satyam who will know?" he asks.

It doesn't help matters that PwC has had "historical issues" in India. The larger audit firms manned by ambitious professionals are prone to cabals, reorganisations and even splits as they grow in size. A former PwC employee who did not want to be identified says it has witnessed a longstanding internal power struggle. He adds that PwC has failed to integrate the six or seven partnerships that make up its auditing arm in India. "They could never come together culturally," he says.

PwC's time in India began in Calcutta, but the firm expanded to Delhi only after a century, under senior partner Amal Ganguli. It was hemmed in, like other Indian auditing firms, by a legal limit of 20 members in a partnership firm. As the company grew through acquisitions—such as Lovelock and Lewes in the mid-1990s—the different PwC units ended up with different names, though they came under the umbrella PwC firm. The integration of units, however, never happened, claims this former executive. "The power you command, the equity and revenues you bring into the partnership determine your place in the firm. That always leads to ethical issues. The size of your billing puts you in an administrative role," he adds.

PwC has had its share of controversies. They were the auditors for the Global Trust Bank, which collapsed in '04. However, PwC had made a strong qualification against the bank's accounts in March '03. After the collapse, RBI barred PwC from engaging new clients. In '05, in the first instance of its kind, PwC challenged the RBI's notification in the Calcutta High Court and was granted interim relief. In April '08, it was cleared by the RBI. However, accounting watchdog ICAI's probe into PwC's role in the gtb case is still on.

Then, in '06, the NGO Parivartan publicised how the Delhi Jal Board was under pressure from the World Bank to award a privatisation project to PwC although it had not fared well in the bids. The project was scrapped, and another ICAI probe in the matter is on.

A new look under PwC's hood came from Sunil Kumar, an independent auditor in Hyderabad, who made public documents he claims he unearthed from ICAI. "The documents show that people signing on Satyam's books on behalf of PwC did not really work there. If it happened, it is illegal," Kumar said. The ICAI and Ministry of Corporate Affairs say they are analysing what really went on at Satyam. The ministry's Serious Frauds Investigation Office has three months to submit its report on the issue. At the same time, ICAI is also examining PwC's role and has called for documentation and issued a showcause notice.

PwC did not respond to e-mail queries or calls from Outlook. The jury is still out on the role PwC played, and on how far the law can go in fixing accountability. An experienced auditor argues that most likely the firm is being criticised for wrongdoings at Satyam that it could not have known about. "An auditor always relies on representations and assurances given by the management. If all steps recommended by law were indeed followed by PwC, they cannot be guilty," he says.

Indeed, at least five rounds of checks and balances exist at PwC—like any other audit firm—to ensure against discretion and mismanagement. Another senior executive who has dealt extensively with PwC in the past said the firm's "processes" are so good that Satyam's mis-statements could not have been a lapse of rules. "This could only have happened if somebody was compromised locally," he suggests.

Jamil Khatri, who heads KPMG's accounting advisory services, points out that the chasm between public expectations of audit and actual duties and responsibilities of an auditor is wide—perhaps too wide. "Strong internal audit function, independent director oversight and proper disclosures are all part of the audit ecosystem. Audit does not happen in isolation," Khatri says. It may make sense to clear the air about what really went on at Satyam, and to do it fast. For, as far as public opinion is concerned, shock is giving way to unaudited anger.

By Pragya Singh with Arti Sharma in Mumbai