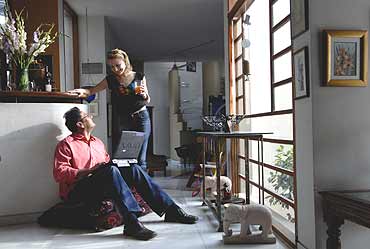 Why Why Not Profiles that get the most hits

Laurent Mignet, a 32-year-old French scientist working for an mnc, lands in India with almost no friends. Inevitably, he finds himself spending long hours on the internet. Wondering how a shy guy like him would ever find women friends in India, he begins to visit a few matrimonial sites, among them Bharat Matrimony. This is where he 'meets' Archana Soni, 28. The Hyderabad girl's profile boasts a degree in psychology and an MBA, and parents with a respectable army background. Intrigued, Laurent sends her a private message signalling interest, which she initially dismisses as a prank by one of her many rejected suitors. "You never know who's serious, and who isn't. Many people have perverse intentions," Archana told Outlook. But curiosity finally compelled her to reply, setting off a chain of e-mails, and later, phone calls, during which she struggled to follow his French accent. Then, Laurent showed up in Hyderabad, only be to whisked away from the airport for an hour-long man-to-man chat with Archana's retired colonel father. And, when Laurent finally saw his chosen bride, he was squashed unnervingly between her parents. While unenthusiastic, they were not downright hostile, which gave the couple the room they needed to take things further.

"It was after this that we actually started to fall in love," recalls Archana fondly, red and white wedding bangles still on her arms. The traditional Indian wedding in Hyderabad was followed by a honeymoon in Kathmandu and France, where Archana hopes to settle someday. 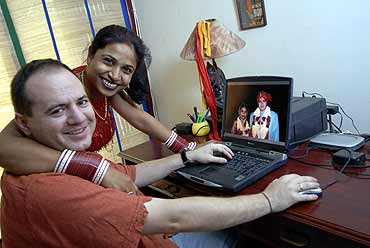 For Archana & Laurent, it all began online

Laurent and Archana are representative of hundreds of young couples turning to the internet for romance and marriage, instead of waiting for Cupid, matrimonial ads or matchmaking parents to deliver the right partner. Why? Because it's a short-cut, a relatively anonymous way for shy people to meet their partners—with the protection of a computer screen, you don't need to be nervous about approaching someone, and rejection is relatively painless. Besides, it's also convenient for those who don't have time to socialise because they work late hours. Enticingly, it also offers interactions with people you would never meet otherwise. Like the accountant in a Delhi media office, who met and married an American school teacher settled in Alaska, where they now live. Or the Dutch postman who married an Indian dancer and settled down in Bangalore.

The internet matchmaking game is like flipping through a catalogue. Each of these networking websites asks you around a dozen questions about your social, personal and professional life, constructing a simple profile of you that gives visitors a sneak preview of who you are (or want people to think you are). Your pet peeves, loves, hobbies and favourite movies; your religious, political and moral views. In the real world, you could spend a week or two dating someone, only to find out, at the end of it that he is a Leftist, for example, or that she can't live with dogs, while you can't live without them.

While some people register onto relevant sites with a purpose, to others it just happens, quite incidentally. Take Arisudan Yadav, 31, and Archana Bora, 27. The London-based MBA student logged on to www.ryze.com, a business-networking site, to reconnect with a country he would soon be returning to. Archana and he casually discussed poetry. When Arisudan landed in India, and met friends he had made over Ryze, Archana was among them. A casual iced tea at Pizza Hut turned into a great evening and progressed rapidly, until Arisudan finally proposed to Archana.

Anurag Jacob, 35, and Vesna, 31, are another such couple, who met, almost by accident, on www.hotornot.com, a site that allows you to upload photographs of yourself and get your looks rated by surfers. Anurag logged on, looking for people interested in tigers, for a tiger-related project he was working on; Bosnian Vesna posted her picture as a joke. But it was her keywords—politics, books, tarot and laughter—that caught Anurag's attention, while she was struck by a picture of "a dark handsome guy with a cowboy hat in an open jeep" and the keywords 'tigers, India, books, football, Tolkien, and photography'. Explaining what prompted her to talk to an Indian, she says, "I've always dreamt of seeing the Taj, a real tiger and cobra. I've been fascinated by India for as long as I can remember."

Tiger Menace (alias Anurag) and Sasha (Vesna) discussed politics, drew comparisons between the Bosnian civil war and Kashmir, and talked of life experiences for about a month and a half before revealing their real names and professions. They exchanged photographs and started using a web camera, making what they shared more real. She worked with a peacekeeping mission in Bosnia, Anurag was a freelance consultant, and they couldn't get enough of each other even though their conversations were yet to take a romantic turn. "If you can click with someone over politics," believes Anurag, "you can click on anything". Even so, it all took them rather by surprise, given that they'd always thought it rather pathetic that people should look for love among strangers, online.

When phone bills hit the roof, they decided it was time to meet. But when Anurag got on a plane for Bosnia, Vesna got cold feet. "When you talk to someone openly like we did, you feel safe because you're behind a screen or on the other end of a phone," she confesses, "You share so much that you become vulnerable to this person. Then, suddenly, you're standing face-to-face with him or her. It's overwhelming." But it worked out. Anurag proposed to her at the Taj Mahal and they now live in Delhi where Vesna is a popular Pilates instructor.

Despite having found each other online, the couple would not agree that it's the best way to meet your life partner. Nor would Kunal, 28, a filmmaker and his fiance Radhika, 24, a copywriter, (name changed) who met through a popular networking website called Facebook. "She sent me a one-line e-mail based on a comment I left on someone's public page. It was so random that I had to reply to it," says Kunal, still amused, "I even guessed she was from Delhi."

From e-mails and chats, they graduated to the phone, all in the space of less than two weeks. But even as their connection deepened, the fact that they had not first met face-to-face made them uncomfortable. Even today, while Anurag and Vesna happily share their story, Kunal and Radhika's story is secret. "I'm not bad-looking, unintelligent, or socially retarded. What the hell was I doing on the internet talking to someone I don't know from anywhere," says Kunal, explaining why. Radhika agrees, "I shocked myself when I would wait all day for his name to pop up on my screen at work, or stay awake all night with him on the phone. My heart told me I was falling in love but my head told me I was stark, raving mad."

Three quick weeks after they first started talking online, a meeting was in order. "I was already in love with her and my only hope, minutes before I met her, was that she was as attractive in person," confesses Kunal, adding, "And she was. Way beyond my expectations."

But there were teething problems, including having to accept each other's lives outside the relationship. Says Kunal, "When we first started chatting, we created our own little world. In the real world, there were interactions with friends, family and work, which took time to get used to." Radhika is quick to warn people looking to form relationships through the net about the pitfalls—with the story of a friend who married a man she met on a matrimonial site, without background checks, only to discover the IT professional was battling drug addiction and alcoholism.

Such stories, however, are unlikely to deter people from seeking love online, because when has love been about logic and not taking risks?