Lotuses For The Pharaoh

Millions of ordinary Egyptians unite in harmony, create a symphony of change 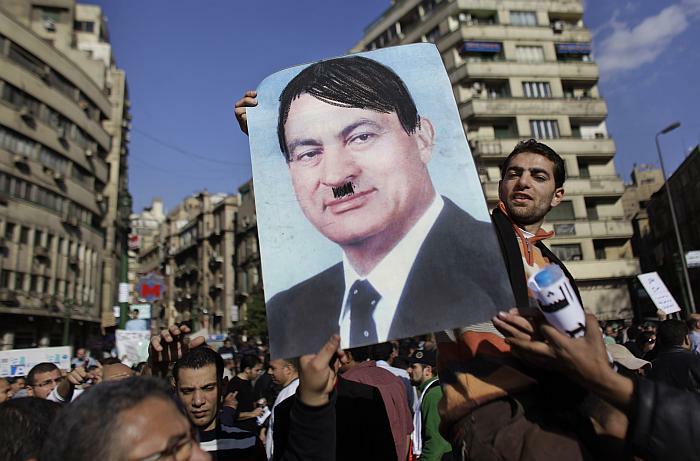 Political Players In The Scene

Heads the Muslim Brotherhood, an Islamist party, perhaps the most organised in the opposition bloc

Floated the National Association for Change, aimed at ending corruption and ushering in true democracy

Heads the liberal Wafd party. It is the second biggest party in the forces now united in opposition to Hosni Mubarak.

Heads the liberal Al Ghad party, he was jailed after he challenged Mubarak in the presidential election of 2005

On January 25, Egyptians set out to recreate themselves, their polity and the very notion of Egyptian nationhood. Dead for over 30 years, during the iron reign of President Hosni Mubarak, the political realm burst out in a popular uprising of the country’s young women and men, like Athena sprang from the forehead of Zeus.

It came almost surreptitiously, and like a bolt of lightning in a clear sky, Egypt found itself in the throes of a revolution, so vast, so astounding and unlike anything the country had seen in living memory that the only frame of reference available was the revolution of 1919 against British rule. The revolution, which seemed to rise out of the depths of the virtual space of Facebook, Twitter and YouTube, poured onto the streets of Cairo and dozens of cities and towns, engulfing Egypt in what its people have started calling “the Lotus Revolution”.

Eight days later, on February 2, the old order fired what I am convinced will prove to have been its final shot. And as such, it was truly worthy of that order: regressive, vicious, irrational and inept. The Middle Age scene of whip-, stick- and sword-wielding men attacking peaceful protesters from horse- and camel-back will go down in the annals of history as among the most memorable images of a dying autocracy gone senile.

Yet, it was on the night of February 2 that the battle for Egypt’s future, its very soul, was fought, and won. A few thousand young men and women held the Tahrir Square against seemingly endless hordes of trucked-in thugs, hurling Molotov cocktails at everything in sight—the demonstrators, apartment buildings overlooking the square and at the Egyptian Museum, humanity’s greatest storehouse of ancient Egyptian antiquities.

On the night of February 2, through the early hours of February 3, our children saved both the nation’s heritage, and its future. Out there were my son Hossam (19), my waif-like niece Salma (whose political baptism of fire was on that same square nine years ago, receiving a police beating while protesting the US invasion of Iraq), my adoptive nephew Mustafa (whose late father, my beloved friend, filmmaker Radwan El-Kashef, would have been tremendously proud of him today), and the hundreds of other young men and women who were with them.

As the dawn of February 3 broke over Tahrir Square, the would-be stalwarts of stability had been pushed completely out of the square, though a couple of hundred of them continued to hurl Molotov cocktails from the safe and ineffectual distance of the nearby October flyover. The victory was achieved with almost unbelievable heroism. With each wave of attacks, the young men and women would mobilise—via whistles and chants, most prominent amongst which were “Save the museum”—to leap into the breach and push back the attackers, doing so under a hail of fire and stones, and occasionally gunfire. 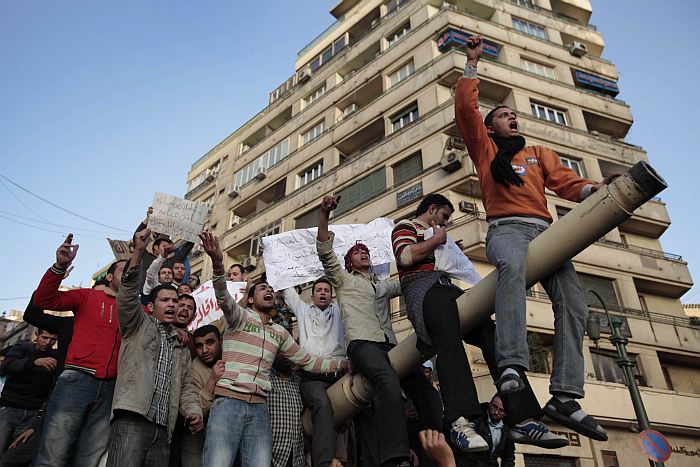 An understanding army The army stood by, but did not harm the protestors

On the morning of February 3, I talked with Ziad El-Eleimy, a lawyer and one of the leaders of the youth movements, who had spent the whole night in the square. He told me at least a thousand young men and women had been injured, and eight killed, all by gunfire. In the course of that grim night’s running battles, 65 of the attackers too were captured, searched, interrogated and handed over to the army. Identification documents carried by the hooligans revealed that many were police officers of different ranks, others were members of the ruling National Democratic Party, and yet others said they had been hired by one of the country’s top business tycoons.

Women never felt more safe in Cairo than in the past few days. A new Egypt was being born.

The contrast between the old order, as represented by the so-called “pro-Mubarak” hooligans, and the new order being created in Tahrir Square, and on the nation’s streets, could not have been starker. Compare February 2 with the day before, which witnessed the ‘Million-Person Demonstration’. On that day, I bumped into Dana Smiley, an American photographer and friend who had been touring the square, clicking away merrily. Dana told me, “I’ve been living in downtown Cairo for 15 years now, and I’ve never felt more secure as I have in the past few days.” In a city where a mere week ago no woman, veiled or unveiled, Egyptian or foreigner, felt safe from sexual harassment on the street, almost everyone I talked to echoed Dana. This was just one of the many signs of a new Egypt being created on the streets.

Take also the day of the ‘Million-Person Demonstration’, which was remarkable not only for its peaceful, indeed joyous nature, but also in self-discipline unusual  in massive crowds. A cnn reporter remarked that he had never seen such control exercised by so many people gathered in one place. Indeed, foreign correspondents could be seen everywhere and they were all treated as welcome guests. (The next day, the so-called “pro-Mubarak” crowds were manhandling, attacking and sexually abusing foreign journalists wherever they could.)

Take also the explosion of individual creativity, with thousands of demonstrators designing and making their own placards, signs and posters, competing not just in summing up their demands and grievances, but also in expressing these in unique and innovative ways, more often than not revealing a typically Egyptian wit and sense of humour. Meanwhile, as the nation’s police force disappeared, Egyptians throughout the country, in working-class areas as also in elite districts, formed what they called “popular committees” to defend their districts against looting and plunder.

Yet, old Egypt is still there, fighting desperately for survival. The outcome of the battle between the two has yet to be settled decisively, but there are already indications of the way forward.

At the moment, the protesters are engaged in the difficult process of creating a unified coalition to negotiate on their behalf. In this, they encounter several challenges, the most significant of which is that theirs has been essentially a leaderless revolution. Sparked off by a number of youth movements, it swiftly went beyond the organisational capacities of the young who triggered it, as much as of the older people who lead the various opposition parties. These, both religious and non-religious, remain, essentially, creatures of the old order.

Indeed, one of the remarkable features of the past week has been the exorcism of the bogeyman of the Muslim Brotherhood, long portrayed by the regime, and accepted by many inside and outside the country as a threat so imminent, it justified authoritarianism and wholescale rigging of elections.

Yet as the diminutive, for all practical purposes non-existent, political arena of the past 30 years gave way to a new political realm embracing millions of newly created citizens, the Bogeyman proved puny indeed. Politics is the Achilles’ heel of the Brotherhood, and the Islamist movement as a whole, for it is only in the absence of politics that ideology reigns supreme. It’s in the rarefied realm of ideology (divorced from the testing ground of political practice) that Islamists of every shape and form have the absolute upper hand.

Yet, the newly created political realm is bound to infuse every single element of the long dormant Egyptian polity, not just political organisations and movements, but also trade unions, social movements and non-governmental organisations. New political forces will evolve; some extant ones will probably fade away; the ruling National Democratic Party will most likely disappear altogether. And those that survive will be completely transformed.

Still, a number of urgent tasks need to be done almost immediately. A consensual representative body needs to be set up with the mandate to negotiate with the army on the mechanisms for a peaceful transition of power. Such a body will have to include representatives of the youth movements as well as, for what they’re worth, representatives of the main political parties, including the Muslim Brotherhood.

The army will have to play the role of power-broker in this transition. There is no danger of this leading to military rule. Popular revolutions do not lead to military rule, coup d’etats do. The army’s insistence on not firing on the demonstrators is already a notable indication of its ability to play this role. Such negotiations, it is hoped, would produce an interim national unity government, excluding the ndp, and charged with overseeing free and fair presidential and parliamentary elections. The police force, which is strongly implicated in a whole range of crimes, will have to be overhauled, initially perhaps under the auspices of the armed forces, and eventually, placing the interior ministry as a whole under civilian, political oversight.

Meanwhile, the streets will remain the decisive factor in determining the nation’s future. Already, today, on February 3,  around 2 pm Cairo time, there are tens of thousands of protesters in downtown Cairo. The Egyptian Revolution, or Egypt’s Lotus Revolution, marches on.

(The writer is the chief editor of Ahram Online, the English language news portal of Al-Ahram, and managing editor of the Arabic daily Al-Ahram.)