Lotus Blooms In The Family Cracks 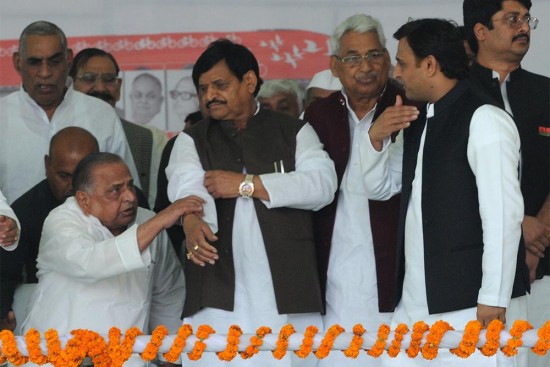 Until six months ago, the Sam­ajwadi Party (SP) was a major force in Uttar Pradesh with Chief Minister Akhilesh Yadav trying to focus on development while signing on dotted lines set by father Mulayam Singh. It was, in fact, the 76-year-old Mulayam who did all the backseat-driving, ­after having carefully placed his trusted aides in high positions in the system of governance to ensure “smooth” functioning. Akhilesh never asserted himself or mustered the courage to stand up to his father and so the young CM often ended up being ignored when it came to decision-making in the party and even in the government.

Queering the pitch for Akhilesh is the return of the flamboyant ‘native’ to the party six years after being expelled—Amar Singh, who once earned the epithet of “de facto chief minister” in de jure CM Mulayam’s government and still carries the reputation of a wheeler-dealer, networker and shrewd political go-between. During what’s turned out in retrospect to be an extended, enforced sabbatical from active politics, Amar plotted his way back to the party pulling all strings. He managed to convince Mulayam’s brother Shivpal and, eventually, Mulayam put Amar Singh, the man with the right connections among the rich and famous, before his family. This May, Amar Singh was back in the SP, and soon, the swords were out in the party’s ‘first family’.