Lost in the Mystic Haze

It's material for ecstasy all right, but where is Sudhir Kakar's 'novel'? 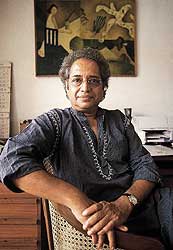 Ecstasy—A Novel
By Sudhir Kakar
Viking Penguin India Rs 295;Pages: 272
GOPAL'S visions ended when he grew breasts." Sudhir Kakar's sensational, attention-grabbing first sentence in his new book, Ecstasy, manages to grip the reader's attention through the first paragraph. The next few pages, however, focus on Gopal's spirituality, his visions of god, his interest in sainthood, and in all this the young boy's conflict with the strange behaviour of his body is completely forgotten. This is symptomatic of what is to follow in the next 250 pages of the novel. As soon as an interesting angle appears in the narrative, it is subsumed by the overpowering focus on the journey to sainthood, which is essentially plotless.

In his Preface, Kakar writes that many events in the novel are based on the lives of Ramakrishna Paramahansa and his chosen successor, Swami Vivekananda, together with accounts of many other mystics like Muktananda, Gopikrishna, Ramana Maharishi and Teresa of Avilla. Kakar's research is borne out amply in the detailed account of the different stages of sainthood depicted through the characters of Gopal and Vivek. Gopal's journey as a mystic blessed with visions and with a faith that attracts all who hear him sing is traced step by step from his childhood to his death due to throat cancer. Gopal's chosen successor, Vivek, travels a more complex route from the privilege of being the son of an ias officer to that of embracing militant Hinduism as an rss worker, but this story is much more sketchily presented.

Kakar says that he is trying to reach the heart of the 'ineffable', and the passion and energy behind this attempt is evident in the book. But while this book would have been interesting as a biography of a mystic/sadhu, or a biography of Ramakrishna Paramahansa or Swami Vivekananda, as a novel it leaves much to be desired. The essential ingredients that one expects in a novel—plot, characterisation, situations and development of narrative—are so rudimentary that it is hard to maintain interest in the events of the novel. It seems as if Kakar himself is somewhat indifferent to, and distanced from, all that happens in the novel that is not directly connected with Gopal's sainthood, and since Gopal's journey as a mystic does not really need any external impetus arising as it does from within, everything that happens outside his mind is ultimately irrelevant to the real concern of the novel.

Kakar does make an effort to give glimpses of a historical, social and political context by making references to the Independence struggle, the Rajput-Jat conflicts, Indira Gandhi's faith in godmen, etc, but these remain limited to just references. For instance, Indira Gandhi is introduced with fanfare in chapter 16: "It was Indira Gandhi who made him (Ram Das) famous." This is followed by a paragraph on Indira Gandhi and her agnostic father, and then a momentary encounter between the mystic and Indira Gandhi in which he turns his back on her and flees as she bends to touch his feet, and the narrative then proceeds to dwell on Gopal—now called Ram Das—and his aversion to women. The Indira Gandhi factor and Ram Das' much-heralded fame are completely forgotten and drop out of the narrator's memory in the novel. A similar fate awaits all other socio-political and historical intrusions.

The most interesting angle in the novel is the fusion of Hindu religion and politics from the point of view of spiritual Hindus trying to utilise Hinduism for larger national purposes rather than the other way around of politicising Hinduism only for political gains. The monastery at Galta with its emotional, poetic Madhavacharya at the head, and the rationalist, intellectual Vishnu Das as his deputy is heavy with the atmosphere of sinister intrigue reminiscent of Umberto Eco's The Name of the Rose. Vishnu Das' vision of a manly Hinduism that can occupy a seat of political power after Independence if there is unity among different Hindu groups culminates in the rss that Vivek becomes a part of in the end. However this aspect is not coherently developed and Vivek's decision to join the rss is neither prepared for adequately nor followed up, so it remains as just another event in the novel.

While it is true that the novel form has evolved greatly in the last century so that it is possible to write a novel without plot, structure or coherent narrative, but Kakar is not using any of the innovations in technique to suit the novel form to his material. Rather, he is straitjacketing his material to fit the form of the novel. His characters and situations thus stutter to come alive. The only character that is eloquent is Gopal/Ram Das as he is the one on whom Kakar has lavished all his attention. Even Vivek who blossoms in some lines is relegated to the wayside in terms of development and interest, entering the novel rather late and not really being able to carve a niche for himself until the death of Ram Das. Sudhir Kakar already has a number of non-fiction works to his credit, and this would perhaps have been the best genre for a book so deeply engrossed in one man's spiritual journey.