The failure to equip the forces well in time has seen government scrambling when war-like situations developed. 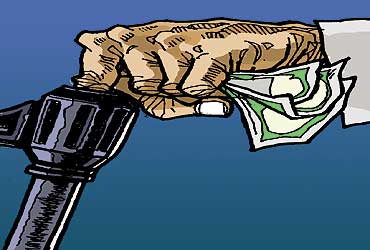 outlookindia.com
-0001-11-30T00:00:00+0553
Some days ago, hidden in the midst of columns of mindless coverage of yet another state assembly election was a small news item that showed just how far the country has degenerated towards becoming a kleptocratic banana republic. The defence ministry was delighted that it had been able to sharply increase expenditure this year on 'capital items', i.e. things like guns and tanks, and would therefore have to return less of the annual defence allocations to the finance ministry. Return allocations? At a time when the country has mobilised half a million men on the Pakistan border and is threatening war if cross-border terrorism does not stop? Someone surely has his priorities screwed up!

But that was the least of what the news item unwittingly revealed. The fact that it would have to return less this year meant that it had returned money in other years. The item made it clear that the amount returned had been much larger in 2000-01. In 1999-00, the year of the Kargil war, the ministry had 'returned' fully half of the increase in allocation of Rs 13,000 crore. Examining past budgets shows this has happened almost every year through the '90s.

This means that apart from the planned cuts in defence expenditure during the '90s, from 3.9 to 2.25 per cent of the gdp, the defence ministry has imposed its own unplanned cuts. More disturbing are the heads of expenditure under which money has not been spent. Obviously, the allocation for pay and allowances is spent in full. Those for food, clothing and consumable items also get spent, although as the Kargil war showed, what the jawans make do with is miserable by Pakistani yardsticks. The first serious shortfalls occur in 'ordnance and materials' i.e munitions, tyres, ball bearings and the innumerable small and individually unremarkable items needed to keep equipment running. This is the area in which last decade's planned cuts have wreaked the most havoc, for even before Kargil they had fallen, as a proportion of gdp, by 70 per cent. What this means is that computer exercises have increasingly replaced real ones, simulators have replaced real flying, and target practice with more expensive ordnance has virtually disappeared. As far as conventional war is concerned, the armed forces now have arms but less and less experience in using them.

Successive defence budgets have tried to protect capital expenditure, i.e. the procurement of new weapons systems. This is why the news item was specially disturbing. For what the cabinet has tried to do, the defence ministry babus succeeded in undoing. It is in 'capital expenditure', i.e. the procurement of weapons systems, that money has been returned year after year. The failure to equip the armed forces well in time has forced the government into the ignominious position of scrambling desperately for weaponry and sophisticated weapons after a war-like situation has developed. That has automatically barred purchases from some of the world's foremost arms producers like Germany, Sweden and the US, because firms there are proscribed by law from selling to countries at war or on the brink of war. Not only has India then been forced to go to sub-optimal suppliers or to the grey market, but they have also been able to dictate terms. As a cag report on weapons procurement during and after the Kargil war pointed out, India has lost in every way: it has been forced to buy sub-standard munitions and weaponry; it has had to pay exorbitant prices, and the weapons have arrived long after the war was over.

The defence ministry and service HQs have placed the blame for this on the excessive vetting of defence contracts by parliamentary and other watchdog bodies and the media witch-hunt accompanying the publication of their reports. But the truth is that the mess is of their own creation.The watchdogs have only reported its consequences and attempted to apportion blame. The failure of defence procurement can be traced to the excessive centralisation of decision-making in the defence ministry, and in the virtual divorce this has created between those who buy the weaponry and those whose lives depend upon having and being able to use it.

Excessive centralisation leads to delays in sanction of money; with concurrent delays in placement of contracts, disbursement of sums sanctioned, and to excessive rigidity in the weapons procurement plan. As it is, with the annual budgeting for defence, it does not get passed till May; and the money does not get allocated till July. This leaves eight months in which to use it. Since contracts can't be placed in haste, inevitably some items in the annual procurement plan do not get bought. But the top-down planning system and the bureaucracy's lack of urgency makes it difficult to transfer funds that are not used to other heads where they can. By the time this is done, the year runs out and the entire procurement exercise has to start afresh.

Here's an example of what this means to the soldiers who do the fighting. In 1998-99, service HQ asked for Rs 1,300 crore to replace old armoured personnel carriers with new generation models. They got Rs 90 crore. In the same year, it wanted Rs 2,100 crore for tanks. It got Rs 600 crore. Yet the finance ministry got back money at the end of the year.

Excessive centralisation also means that the procurement of routine items like 'squibs'—automatic reloading cartridge for the gun on an armoured personnel carrier—stun grenades, rubber bullets etc for Kashmir also have to be routed through the home ministry and get either rejected or delayed for months on end. Last summer, for example, a large proportion of the Bofors guns in the Himalayas lay inoperable for months because the MoD had delayed the purchase of tyres to replace the ones that had worn out!

Lastly, excessive centralisation offers inexhaustible scope for kickbacks, and these too take time to arrange. Defence procurement will remain a mess so long as power remains with those not entrusted with the defence of the nation.