Congress politics wore Madhavrao down towards the end 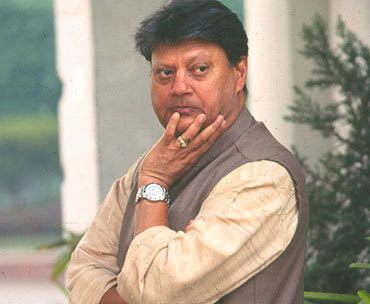 Madhavrao Scindia: A Life
By Vir Sanghvi By Namita Bhandare
Viking/Penguin Pages: 355; Rs. 550
"Those whom the Gods love die young" is a cliche. With some truth. Jesus Christ and Alexander the Great died at 32, Byron at 36, Keats died of TB at the age of 26. Rajiv was 47 when he was assassinated. His Highness Ali Jah, Umdat ul-Umara, Hisam us-Sultanat, Mukhtar ul-Mulk, Azim ul-Iqtidar, Rafi-us-Shan, Wala Shikoh, Muhtasham-i-Dauran, Maharajadhiraj Maharaja Shrimant Madhav Rao III Scindia Bahadur, Shrinath, Mansur-i-Zaman, Maharaja Scindia of Gwalior ("Bhaiya" to his close friends) passed away, by Indian standards, in the prime of youth (56). I remember when I heard the news on October 30, 2001, I was filled with disbelief. Just a couple of weeks earlier, I'd had a melancholy chat with Madhavrao during which he confessed his disillusionment and disappointment with Congress politics. He was thinking of quitting public life altogether. He was neither a schemer nor a sycophant, two qualities mandatory for climbing the greasy pole at 24, Akbar Road. As M.S. Gill wrote in Madhav's obit for Outlook: "He was an altogether different fish in the sea of politics."

Sticking to my long-held conviction that politicians and journalists are natural adversaries, I've never had politician 'friends'. I have close acquaintances, and not-so-close acquaintances. This helps me preserve my sanity and keep prejudices at bay. Madhavrao I would describe as a close acquaintance. I forget the month and the date and the year, but some time in the late '90s a chance encounter at an informal party, thrown by the charming critic Madhu Jain, brought us together. He had a few drinks, lit a cigar and we talked of cabbages and kings. Along the way, he expressed a desire to meet the foreign press and some senior Delhi journalists. I believe I arranged in quick succession three lunches at the Taj Mansingh's French restaurant, thereby blowing my annual expense account budget. Madhav drank only the best wines, which explains the hole in my purse.

At one luncheon, which continued for nearly three hours, the bureau chief of Time, correspondents of The Guardian, The Independent, the BBC, the late Nikhil Chakravartty and one or two others pounced on Madhavrao with a volley of questions on domestic politics in general and Congress politics in particular. The lunch was a huge success and Nikhilda, who had never met Madhavrao before, took to him instantly. Midway through the interrogation, Madhavrao put his hand up and said, "Enough. Now I want to ask the questions." For the next 60 minutes he nimbly quizzed the foreign journalists on India's image in the West, the recently opened economy and the Lord's cricket ground, which he knew like the back of his hand. "We must do this again sometime," Madhavrao said to me as he left. I sighed.

Days after his plane crash, on Barkha Dutt's We the People, devoted to Madhavrao's untimely death (and that of other young leaders like Rajesh Pilot, Jitendra Prasada, P.R. Kumaramangalam), Barkha invited a few Congress worthies to evaluate the implications of Madhavrao's demise. Everyone used phrases like: "A void that cannot be filled"; "A great leader with a great future in the party" etc, etc. I volunteered to suggest that they were shedding bogus tears. When I reminded them how alienated and unwelcome Madhavrao felt (especially in his last years) in the Congress, Mani Shankar Aiyar with characteristic candour agreed there were "problems" and "Madhav did feel left out". However, Mani felt this was a misperception on his part. It is dangerous to disagree with Mani, but I feel his assessment is wrong.

Vir Sanghvi and Namita Bhandare's timely biography reminds us, yet again, about the intrigue, the treachery, the viciousness of Congress politics.Sonia Gandhi may have been loyal to him and respected his talents—but others were only too keen to stab him in the back. To be sure, Vir and Namita have not put together a critical biography, and Vir does not pretend he is writing a warts-and-all history. Nevertheless, the authors tell a riveting tale set against the hurly-burly of national politics from 1960 to 2000.

The story has villains and heroes—Sardar Angre, the Rasputin, is villain No. 1—but also the portrait of the Rajmata of Gwalior is far from flattering. The drama of family squabbles, Byzantine plotting, shady property disputes, is worthy of a Bollywood potboiler.

Are there any lessons to be learnt from the life and times of Shrimant Madhavrao Scindia? This fine biography of a fine man suggests that integrity, competence and vision are not enough to succeed in our toxic polity. You also need opportunism, greed and doublespeak. Wherever he is, His Highness, cigar in one hand and a glass of wine in the other, must be looking at Indian politics with revulsion.