Looking Back At Simla

Welcome views from both sides of the border, but one slightly blighted 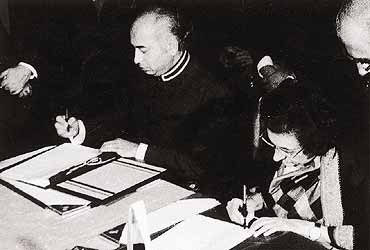 By one of those quirks of irony with which life is replete, this book—looking back at one of the crucial landmarks in the apparently endless circle of conflict-conciliation-conflict between India and Pakistan—reached me on the eve of the 'inconclusive, not failed' Agra summit. Indeed, it arrived on the day when newspapers had splashed General Pervez Musharraf's interview 'rejecting' the Simla Agreement and the subsequent Lahore Declaration. After his arrival in Delhi, however, he denied having trashed Simla and Lahore and emphasised that he was only underscoring the failure of these two accords to resolve the 'core' issue of Kashmir.

This surely revived Simla's resonance and enhanced the relevance of the theme of the book under review, Simla's 'wasted promise'. The book's own promise—that the two well-known co-authors from the two sides of the subcontinental divide, P.R. Chari and Pervaiz Iqbal Cheema, might have produced an agreed assessment of the Simla Agreement and its subsequent working or non-working—also excited me. But this turned out to be vain hope. The relatively slim volume is a compendium of two separate books that often give a contrary view of even established facts. It reminds me somewhat of the 1961 report by the Indian and Chinese officials on the boundary question.

Of the two, Chari is relatively objective, for he does not fully adhere to the standard Indian position and is willing to look at the situation from more than one point of view. Cheema, for all the respect I have for his scholarship, disappoints by sticking firmly to Pakistan's line. To say this is not to suggest that everything he says lacks validity. Much of what he says—especially his plea for a settlement of the Kashmir issue "within some framework", either Simla or the UN—is certainly pertinent.

Two examples of his excessive partisanship that detract from the undoubted value of his contribution may be cited. The first is the "nuclearisation of South Asia" because of India's first underground detonation in 1974. Understandably, Cheema argues that this accelerated the already fast erosion of the Simla Agreement and evaporation of the 'Simla spirit'—a conclusion with which Chari agrees. Where Cheema is profoundly wrong is in claiming that Pakistan's 'aspiration' to go nuclear was triggered only after India's 'alleged pne'. This indeed is the Pakistani refrain but it is contradicted conclusively by irrefutable evidence that Zulfikar Ali Bhutto launched the Pakistani nuclear programme at that famous meeting of scientists under a marquee in Multan in January 1972.

What is more, Zulfi's memorable declaration (an adaptation really of Mao's earlier saying in the Chinese context)—"we will eat grass but make the Bomb"—was made not in 1974, nor in 1971 but in January 1965. Why? Because Lal Bahadur Shastri had inaugurated India's plutonium separation plant, the importance of which Bhutto understood better than other Pakistanis or, for that matter, Indian politicians.

Secondly, Cheema makes the absurd claim that the fighters Pakistan had to withdraw from Kargil in 1999 were only mujahideen while the world knows that they were soldiers of Pakistan's Northern Light Infantry. Bill Clinton has confirmed this—in relation to Nawaz Sharif's desperate dash to Washington on July 4, 1999—in a bbc programme devoted to the former US president.

All this is peripheral compared with the book's fundamental flaw: a curious refusal to mention the principal reason that made the Simla Agreement infructuous. It was Bhutto's failure to live up to his promise—admittedly verbal, not written, but solemn nonetheless—gradually to convert the Line of Control in Jammu and Kashmir into an international border. This was the essence of the Simla solution and "gradually" was the key word. At first he pleaded "domestic political difficulties" but later bragged—among others, to the then Indian ambassador in Islamabad, Shankar Bajpai—that despite being the leader of the "defeated country" he had outsmarted the proud and victorious Indira Gandhi. She has rightly been criticised for being too trustful of a man who was so slippery that compared with him an eel would have been a leech. Her advisors were victims of what can only be called the "Versailles syndrome"—the notion that one shouldn't be too harsh to a vanquished foe. Chari at least notes the existence of the verbal understanding; Cheema ignores it completely.

For all that, the Simla Agreement of 1972 will continue to be of interest to serious students of India-Pakistan relations. But Musharraf has delivered yet another blow to its relevance. For one of the three reasons no document could be signed at Agra was the General's refusal to treat the proposed Agra Declaration as a continuation of the accords at Simla and Lahore.