It's makeover season on the telly, and it's spilling out onto real life. Any look, any shape, any way, it's all available now. 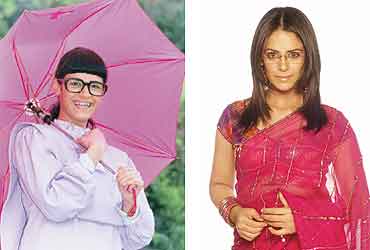 outlookindia.com
-0001-11-30T00:00:00+05:53
I am up on a ridiculously high chair as Monsieur Herve Bonneau, Dior's make-up artist from Paris, flutters over me. Armed with a bewildering palette of eye colours, he coos, "purple, blue, or green, hmm?". I have a thing for pink and its cousins, so purple it is. Swish, swish, pat, pat. A bit of jaw contouring with a beige blusher, some twirls from a blue mascara stick. "A little gloss?" And I'm done. I have officially been "made over" at the Dior counter at Shopper's Stop in Gurgaon, Delhi's feisty neighbour. They have to tweeze the mirror out of my hands five minutes later as I sit looking at a face that is mine, only gazillion times prettier. I was beholden and this was beauty.

Beauty that's now a tangible commodity, a product on offer in India's booming Makeover Bazaar—to be bought off shelves, acquired in beauty clinics, slimming centres, spas and stylists' studios, and procured even under the surgeon's scalpel. And if we go by how Sony turned its ratings skyward by transforming the ordinary, hard-working Jassi into a glamour icon, it's a commodity that is in demand. Scattered across TV schedules are Cinderella stories caught on camera, in serials and on reality shows alike (see box)—symptomatic of a growing breed of Indians raring to go look their best.

Samantha Kocchar, the stylist featured on NDTV Profit's The Makeover, tells us it is so: "Earlier, people came to my studio for a hair-cut or make-up. Now they want to change their entire look, from head to toe." This need to consult experts turns into a flood of queries during shows and later in columns written by individuals knighted by exposure on TV and newspapers. Like Queeny Dhody, in charge of Jassi's makeover and beauty columnist in a Mumbai daily, who has everyone from hip grandmothers to insecure college students seeking her advice on how to look "completely different". 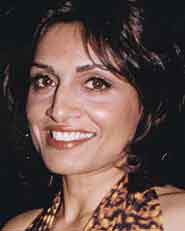 Behind this surrender to makeover experts is the growing belief that a better image equals a better life. "Even maidservants are better dressed now because it has become a competitive society. Anything that gives you an edge is lapped up," says sociologist Promilla Kapur. She links the current obsession with the body beautiful to the influence of the mass media that bombards us with images of attractive and successful people. "People want the things they see in newspapers or on television," corroborates Lovina Gidwani Jha, operations and development manager at Franck Provost, a Mumbai salon. It's no longer surprising to see girls as young as 10 years getting their hair coloured or straightened. An obvious sign, Kapur believes, of how important appearances have become today.

With such strobe lights on the exterior then, even surgery isn't too extreme an option to better one's looks. On the quest to a better body are Indians trawling the net for information and plastic surgeons they can trust. Like Calcutta-based cosmetic surgeon Manoj Khanna, who registers 60-80 hits a day on his site. His clients include a schoolteacher from rural West Bengal, a Burdwan bureaucrat and a young corporate climber from Jharkhand—indication that makeovers today aren't just for the celebrity and the super rich. Higher disposable incomes and a gradual downward spiral in the cost of procedures means that the largest chunk of clients, around 70 per cent in Khanna's case, hail from middle-class backgrounds. And sometimes even lower income groups.

Stories like that of Malati, a domestic help in Mumbai, who came to plastic surgeon Vijay Sharma after saving a few hundred rupees for a nose job, reveals how far the phenomenon has percolated. Sharma, as president of the Indian Association of Cosmetic Surgery, has followed the industry in India, which he says has grown over six times every year since '02.

The actual step into a doctor's clinic, though, is usually motivated by occasions where looking good is a priority. Anoop Dhir, plastic surgeon with Apollo Delhi, is flooded with women clients who want to get rid of their stomach flab through liposuctions or tummy tucks just before marriage. But in some cases, a body makeover is primarily about the mind. Being bullied for having oversized breasts in school, 14-year-old Arundhati came to K. Anand's cosmetic surgery clinic in Bangalore with her parents. "She was psychologically very traumatised; a problem solved with just one surgery," he says.

That people are healthier and happier in most instances after cosmetic surgery is substantiated by studies in the British Journal of Plastic Surgery and the American Aesthetic Surgery Journal. Speaking about aesthetic surgery, Sunil Chowdhury, senior consultant plastic surgeon with Max Healthcare, Delhi, says it is the only surgical speciality whose prime aim is to provide happiness. "I believe two indices exist—The HYL or 'How You Look' index and the WYF 'What You Feel' Index. Aesthetic surgery on selected individuals has the potential of restoring confidence and happiness by harmonising the HYL and the WYF indices."

But there is a catch. Not everyone who comes in for plastic surgery has realistic expectations. "Common misconceptions range from a belief that all aesthetic surgeries will be 'scarless' to demands to look like someone famous," says K. Ramachandran, a cosmetic surgeon at Apollo, Chennai. Some may suffer from image-related disorders like Dysmorphic Syndrome where sufferers take body-hating to extremes. Other signs of trouble are taking on large debts to finance surgery or thinking that you can radically alter opinions about yourself by looking better. The majority, however, just yearns for a nose that's straighter, a smile more radiant, a jaw more shapely and skin that's smoother and ageless. 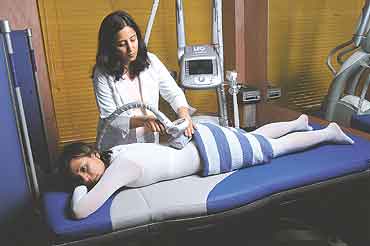 This hankering for appearance boosters means it's boom time for those in the makeover industry. "What started as one clinic in Mumbai in December 2002 is now a chain of 30 clinics across four metros and smaller towns like Hyderabad, Pune, Ahmedabad, Chandigarh and Ludhiana," says dermatologist Aparna Santhanam of Kaya Skin Clinic, rubbishing the notion that the phenomenon is restricted to the major metros. Reaching further into middle India are VLCC's beauty and slimming clinics that have made inroads into Ambala, Bhatinda, Panipat, Aurangabad, Nagpur and Vizag. Her chain, says Vandana Luthra, chairperson, VLCC, owes its success to changes in lifestyle, increase in incomes and professionalism in urban India, with more and more people interested in looking good to "make a mark".

With services ranging from non-surgical face-lifts to body contouring, hair extensions to the removal of acne and pimple scars, these makeover factories combine a spa-like ambience with the expertise found in a doctor's clinic. With trained technicians evaluating beauty banes, there is a steady change in the client profile. Men who wouldn't be caught dead in such establishments a decade ago are now making appointments for nose jobs and "face-glow" sessions. In Chennai's upmarket Ipsahani Centre branch of Kaya, men troop in in equal numbers and sometimes make for over 50 per cent of the clientele.

Images of the traditional unkempt Indian man still bothering you? You'll be swept away when you hear image consultants Yatan and Jojo, who remember being besieged by mail after writing about eyebrow-shaping in their men's grooming column. "It's a misconception that men aren't vain. They just didn't have places to go to. But now I have to queue up for a facial," smiles Yatan.

With men and women streaming in, can corporate India be far behind? Realising the edge that groomed and attractive employees give, firms are hiring professionals to teach their staff the works. Personal hygiene, advice on perfumes, dressing, make-up, hair and style tips all form part of the package that Yatan and Jojo deliver to over 200 companies—ranging from advertising and PR firms to TV news channels like Zee News and Aaj Tak. "Most organisations see a remarkable boost in productivity levels because confidence levels do go up," remarks Yatan. 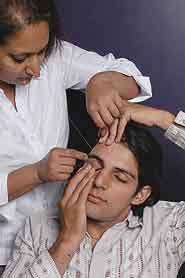 With the influx of big bucks, there's been a corresponding surge in the sheer availability of procedures, techniques and talent too. According to N.K. Pandey, executive director at Escorts Hospital & Research Centre in Faridabad near Delhi, a pool of plastic surgeons are returning to India after training in the latest techniques abroad. Much like Hollywood films, newer innovations are immediately transported to Indian shores. Glycolic and chemical peels that are just getting popular abroad is common parlance here already. From temporary facial fillers for saggy cheeks like restalyne and perlane, we have switched to Aquamid, a permanent filler that could last up to five years—available only in European markets and now in India. French Louis Paul Guitay (LPG) machines, which massage away fat and stretch marks and get celebrities like Jennifer Lopez, Elle MacPherson and Claudia Schiffer to swear by them, are now available in exclusive spas like Spa Zeita in Delhi. Meanwhile, in Mumbai Asha Bachani runs a face gym that uses techniques borrowed from aerobics, resistance training and shiatsu.

But in the rush to transform exteriors, is our concept of beauty changing? "I think we are buying into the whole Paris Hilton-type sexuality and beauty," says Alka Pande, author of Indian Erotica, who fears the international waif-like look will usurp the classic idea of the voluptuous Indian beauty. She deplores all trends that sweep the Indian identity under the carpet, like the current craze for blonde tresses and the long-standing obsession with fair skin. A point that registers sharply when middle-class Jasmeet Walia flings back her now straightened hair, looks at the camera and demands she be called Jessica. But since we are still in the honeymoon stage, such warning bells register faintly in the background. For now, all roads lead to Makeoverville.