"Long-Term After-Effects Of Drugs Could Be Disastrous" 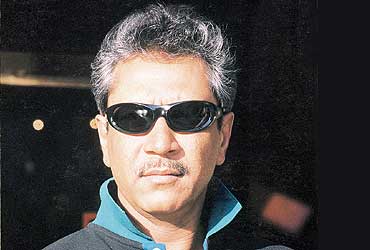 outlookindia.com
-0001-11-30T00:00:00+0553
On June 7, Outlook, while researching the 'Drugs and Cricket' story, contacted former India cricket coach Anshuman Gaekwad on telephone at his Vadodara office. We sought his views on the prevalence of performance-enhancing drugs in Indian cricket. Gaekwad conceded that use of drugs was common in the team and it had helped the players stay fit.

Gaekwad also explained how drugs had changed the face of the game. When requested for a detailed interview on the subject, he promptly agreed. Consequently, senior correspondent Davinder Kumar met Gaekwad at his Gujarat State Fertilisers and Chemicals Limited office, Vadodara, on the morning of June 9.

The interview lasted for over one-and-a-half hours. Throughout the interview, Gaekwad maintained that he had nothing to hide and that everything was on record. On returning from Vadodara, Kumar again got back to him to confirm whether he could specifically name the drugs which the Indian cricketers were using. Gaekwad's reply was he did not know of any except steroids and cortisone which he had mentioned in the interview.

After Outlook published excerpts of the interview along with the story on use of drugs by Indian cricketers last week, Gaekwad denied that he had spoken about performance-enhancing drugs being used by the Indian cricket team during his stint as the coach. He also threatened legal action against the magazine. Outlook stands by the interview. Interestingly, during the over-90-minute interview, Gaekwad not only talked about cricketers using drugs, but also on other issues dogging the team—the burnout of players and the BCCI's conduct, for example. We reproduce further excerpts from the same interview, the contents of which Gaekwad largely denies in the wake of its publication in the magazine:

Have any significant changes occurred in cricket in the past few years?
The game has become very fast. The changes began from 1983 onwards and picked up in the 1990s. The frequency of one-day internationals to Test matches has gone up. More so, it is the ODI mentality that is now prevailing over the Test matches. The analysis and plan of the game have improved. In case of odis, Sanath Jayasuriya changed the profile of the game. He took the strike initially and scored the most in the first 15 overs. This was just opposite to our traditional style where we were very careful of not losing wickets for the first 15 overs and relied heavily on the slog overs.

Do you see any difference in the attitude of the players today?
Due to the prestige, popularity and the money involved in the game, the players work hard to remain in the team. Which is why they have also become very conscious of their fitness and performance. Sachin is very conscious of his physical fitness. He puts on weight quickly and also gets rid of it quickly. He has been seeing doctors in Australia and England for his back problem. There is so much tension in the game as all the time players want to play and perform at their best.

With so much cricket being played today, will it have some bearing on the players?
Yes. The more cricket the boys play, more burnouts will happen. The players are trying to be first all the time. For them, once the time goes it never comes back. So, everyone wants to make the most out of their presence in the team. It is an unusual trend for the game. As a result, the game is suffering.

We are not getting enough talent for the team, while the other cricket-playing nations have a choice.For example, there is no proper guidance for our under-19 players. They do not have any representation in the team and there is nobody to teach or guide them. So, whatever our talent, it's all going waste.

What can the bcci do in this regard?
A time will come when they (bcci) will realise that they have to slow down. We do not have talent like South Africa, England or Australia. The Board has to draw a line somewhere. Our playing levels are less than the English, Australians, or for that matter even the Pakistanis. Their approach, outlook towards life and eating habits are totally different. For example, not many Indian cricketers can slide on the ground and also we do not have good grounds to slide on.

But some senior players hold the view that the Board acts autocratically. Like excluding Nayan Mongia from the team......
The Board should come out with a statement. Undoubtedly, Mongia is the best wicketkeeper at the moment. It is beyond one's comprehension why he should not be taken in the team. The bcci must substantiate its decision. Don't keep the players guessing on decisions you take about them. Such things only give rise to speculation.

How do you interpret the abuse of drugs in cricket?
At this rate, cricket can go the body-building way. The long-term after-effects of the drugs could be disastrous both mentally and physically. Could be that players are ignorant. If the doctor is giving it to them, who is responsible? If you are recovering from injury and not playing, then it's a different case. But nothing should be allowed that gives you artificial energy.

How Not To Regulate A Governor