Britain gets tough with its money laundering laws 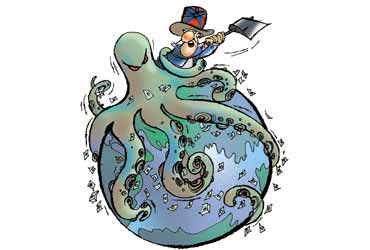 outlookindia.com
-0001-11-30T00:00:00+0553
Hawala may be one of the thousands of words India has gifted the English language, but post-9/11, the Brits have learnt to deal with it as never before. Dramatic new checks imposed by the Financial Services Authority (FSA) from December 1 now spell trouble for not only terrorists for whom London has been a central junction for moving money but even for thousands of Indian businessmen and political leaders who have salted money in accounts that are illegal by Indian law.

"Hawala describes all forms of alternative banking," Vincent Harvey, director of Britain's National Crime Intelligence Service (NCIS), told Outlook. "It is not focused on South Asia alone but South Asia is a big area of activity we are looking at."

London introduced money laundering regulations in 1993; it's enforcement that gets tough now. Every account through which money is not moving within the range of an expected usual for the account holder's profile will now be examined closely. The FSA can prosecute offenders on criminal charges, and can name and shame individuals and institutions that fail to meet standards. It is setting up teams to monitor banks, particularly those which deal with clients in offshore or "non-compliant jurisdictions", according to Carol Sergeant, MD of the Authority. Visits to the offices of several firms have already begun and those at fault will learn to fear the mid-day knock.

The key position in the new system will be that of a money laundering reporting officer in each bank or financial institution. The FSA will vet their appointment, monitor their reports and the action the management took on the reports. The FSA will have the right to "withdraw permission for some kinds of financial activity" to these institutions. "If we find individuals at fault, we will put their names on our website so that they cannot work in institutions again," says Sergeant.

"We will work to detect what look like suspicious transactions, and then investigate whether they are really suspicious or not," Sergeant adds. Suspicions and concrete info will be shared with regulators around the world. The NCIS will be central to this networking. Britain has developed Alert, a new IT system to warn investigators of suspect accounts. A financial intelligence database has been set up with information shared with other countries over a secure website.

"Britain is well ahead in this technology," says Harvey. It's a system that rests on strategic analysis of money transfers and pricing patterns of drugs, weapons and other trade in the market outside. Last year, about 19,500 suspicious transactions were tracked and after September 11, more than 4,000. "Some of the people we're looking at are among the richest in the country, as rich as the Queen," says Harvey.

But patterns matter more than size. "The clue to the first bombing of the World Trade Center (WTC) came through a Visa card transaction of $600," Harvey says. "There is no minimum amount for a suspicious transaction." The banks themselves will be prime investigators. "A lot of terrorism is funded by legitimate money," Ian Mullen, chief executive of the British Bankers Association, told Outlook. "We are developing new techniques to tackle and unearth this kind of money." New EU-wide regulations will also give regulators power to investigate solicitors, a prime source.

The new powers have inevitably led to misgivings that they could be abused. But fundamental protection will remain in place."A banker cannot reveal confidential information without a court order," says Mullen. Courts are expected to be largely supportive of the new measures.

There is no precise estimate but billions of suspect dollars are thought to pass through Britain's financial systems every year. London has the world's biggest foreign exchange market with a daily turnover of more than $500 billion. It has a record 481 foreign banks, which manage more than half of Britain's banking sector assets, totalling over $5,000 billion, more than New York and Tokyo combined. London is also the world's biggest fund management centre with total assets of about $4,200 billion. "Because of its sheer size, the markets in London have a high exposure to money laundering," Sergeant acknowledges. The favourite hawala route for Indians has suddenly turned unattractive.