Death stalks the Chambal gharial. Apathy, not a 'mystery disease', may be to blame. 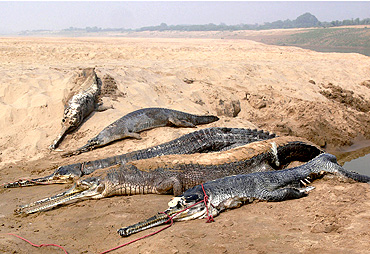 On December 9, veteran gharial researcher Rishikesh Sharma noticed something amiss as he walked past the Chambal river sandbanks on his daily observation rounds. On his approach, of the seven notoriously shy giants basking in the winter sun, one stayed behind while the rest slipped into the green water. "His tail was frayed, and he looked sluggish and listless," recalls Sharma. Within an hour, the gharial was dead.

After that, every other day two or three gharials would be found floating belly-up in the river. A month later, the death toll in the Chambal Valley Sanctuary has mounted to 81, and shows no sign of stopping. What makes this exceptionally alarming is that this 180-km stretch reserve, spanning Uttar Pradesh, Madhya Pradesh and Rajasthan, is home to more than half of India's 1,400 gharials. Worldwide, there are 1,500 gharials existing in the wild today.

This is the second time this critically endangered crocodile, known for its graceful, elongated snout, is on the brink of extinction. When a 1974 survey showed only 200 gharials remained in the wild, the UN-assisted Project Crocodile was launched. A male crocodile was flown in from a zoo in Frankfurt to initiate a captive breeding programme. Eggs were collected from the wild so that hatchlings were hand-reared safely beyond the reach of poachers and predators, until they were old enough to be re-released into the wild. 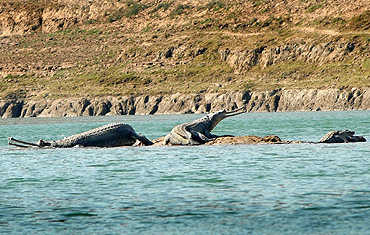 Croc frolic: Gharials at their favourite wintertime activity, basking in the sun

In 1982, when wildlife biologist Antoon de Vos wrote a report for the Food and Agriculture Organisation of the UN, lauding the project as a success, it sealed the gharial's fate. Gratified with the praise, the government put an end to the project's funding, paying no heed to de Vos' caveat: that for the programme to be a complete success, the survival rate of re-released crocodiles needed to be consistently monitored. Sure enough, a survey conducted in 2003 showed that the number of re-released gharials had plummeted by 60 per cent in five years. Reports pointed fingers at "human pressures" like illegal fishing, poaching, sand-mining and dams that washed the crocodiles down to inhospitable terrains.

This time around, though, wildlife officials and vets are short on reasons and remedies, but have as many theories and speculations to offer as they have cadavers. Wildlife vet Dr K.K. Jadav, who has conducted 26 gharial autopsies with his assistant, traces the liver and kidney damage he saw to heavy metals in fish that have migrated from the Yamuna to the Chambal river reserve. "Heavy metals suppress the immune system. The slow digestion process during hibernation, and bio-accumulation of these toxins in the gharial's system increase the damage." But other wildlife experts say this doesn't quite explain why other, more sensitive aquatic life-forms that reside in the Chambal—like the dolphin, or the critically endangered giant soft-shelled turtle—are unaffected.

According to Rajeev Chauhan, Etawah-based founder of the Society of Conservation of Nature, the wildlife authorities are largely to blame for the gharial crisis. "Every week, about 30 boats fish illegally in the protected area because the authorities never patrol it. Even with the gharials now dying, all they do every day is search the 25-km affected stretch for dead gharials, and collect, burn, dispose. They do nothing else to save it!" Early on in the crisis, Chauhan unearthed five dead gharials that were buried in the sandbanks, after he got a tip-off from the local villagers. Clearly, wildlife authorities were trying to hush up the deaths, he feels.

"The local media is hounding us! Everyone is giving us negative publicity!" complains wildlife warden Umashankar, thoughtfully chewing on gutka as he points out the "muddy kidneys" and "sandy livers" in the gruesome photos of gharial autopsies he witnessed. "But we are doing everything we can. We're going for post-mortem, sending organ samples and fish samples to the Indian Veterinary Research Institute, and will take measures when we get their report."

But that's just not enough, say wildlife filmmakers Rajesh and Naresh Bedi, who have had a special interest in the gharial since they made their award-winning documentary, The Ganges Gharial, in 1985. "It's a pathetic state of affairs!" exclaims Rajesh Bedi. "They're dying every day and nobody knows what to do! Tigers bring local MLAs into power, so the tiger lobby is strong! But the gharial is 20 times more endangered, and it's just not a priority in our system. It's just another crocodile, that's it!"

Naresh, who was part of a crisis committee comprising wildlife officials and experts that met to discuss the problem on January 7, chimes in, "Something urgent needs to be done! Get new scholars, vets, someone trusted and passionate to monitor the animals, to find out what's leading to this, instead of going on about a 'mysterious disease'!"

Some wildlife experts suggest taking sick animals away from the affected environment for treatment and monitoring; others suggest increasing the water level to wash out the heavy metals. But this takes writing letters, planning budgets and getting permissions. "All of it takes time," says Rajesh, "but there's not much time left."

With A Shadow Of Doubt