WIll the Great Indian Bustard be the first species to go extinct in India? 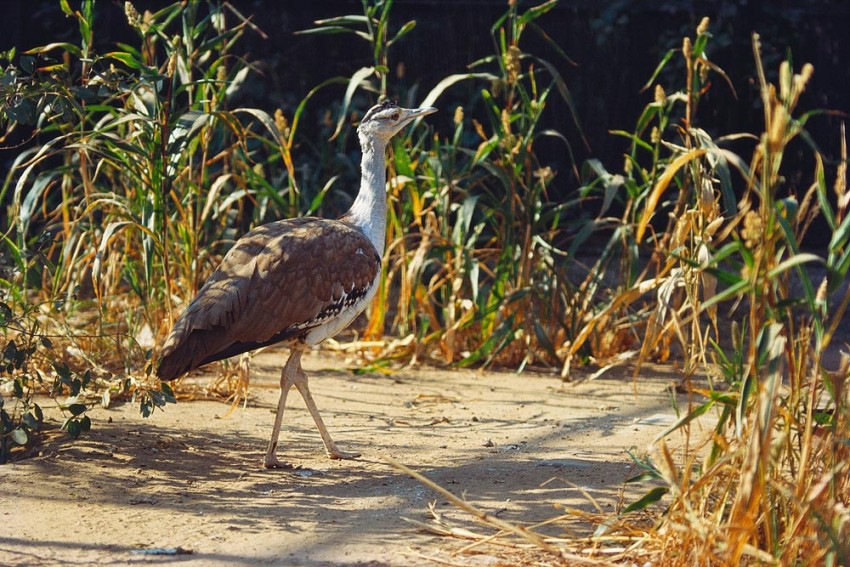 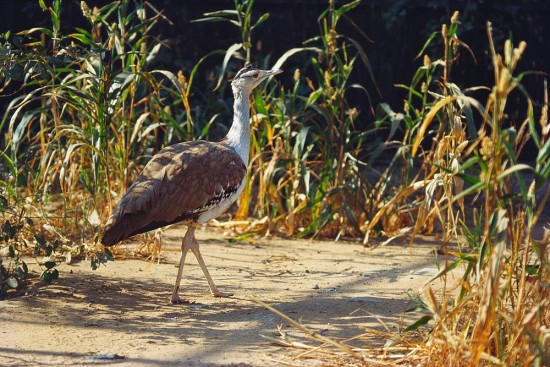 On the afternoon of September 15, a farmer in Karamba village of Solapur, Maharashtra, was grazing his cattle when he noticed a large, severely injured bird on the ground, its wings singed. Hovering by, waiting for death to strike, were a few feral dogs. As he edged closer, he saw a black mobile-like device on the prone creature. He knew the bird, a frequent visitor to his fields from the adjacent Nanaj sanctuary, and immediately informed the forest department. Within minutes, a rescue team reached the spot, gathered the inert bird and rushed it to the veterinary hospital in Solapur. But it was too late. ‘Alpha’ was dead.

Who was Alpha, and why such a hullabaloo about a bird?

Alpha was the rarest of the rare—a Great Indian Bustard, that unfortunate bird usurped of the National Bird status by the glamorous peacock as babus fretted that ‘bustard’ would be likely misspelt, causing considerable embarrassment. The GIB, as it is commonly referred to, is listed as ‘critically endangered’ with a global population of just about 150, almost exclusively in India. Once found in the dry bush and grassland sweeping across the Indian subcontinent from Pakistan in the west up to West Bengal in the east, and Tamil Nadu in the south, it has now been wiped out from 97 per cent of its range—even in sanctuaries created for its protection, like Gaga-Bhatiya in Guja­rat, Ranebennur in Karnataka, Sor­san in Rajasthan, Son Chiriya (Karera) and Ghatigaon in Madhya Pradesh. Its two most viable populations are in and around the Desert National Park in Rajasthan, which has about 100 birds, while Naliya in Kutch counts about 30. The rest are sparsely scattered in a few other pockets in erstwhile Andhra, Maharashtra and Karnataka.

Alpha was special. As his name sugg­ests, he was a dominant male, ‘productive’ and had successfully mated this April. In fact, so enthusiastic was he that the devoted forest staff nicknamed him ‘Vicky Donor’. Alpha was one among the three male GIBs in Maharashtra, besides the odd transient ones. The other male was younger, and ima­ginatively called ‘Chotu’. Both had been tagged by wildlife researchers, to und­erstand the mystery that surrounds the birds, like where they migrate to during the non-breeding seasons. Int­e­­r­estin­gly, Chotu, who was fitted with a GPS transmitter in April 2015, revealed the great distances these birds fly, and the large areas they use. Writes Vaijayanti Vij­ayaraghavan, a researcher with the Wildlife Institute of India, working in Nanaj, “As the monsoon commenced and the breeding season set in, Alpha drove Chotu out of Nanaj, propelling his journey across the landscape.” Chotu was to fly over 1,200 km, across districts, and to the Karnataka border, in the three months he was monitored.

Now, Alpha is dead, electrocuted by naked power cables. The same morning Alpha got tangled, he was seen displaying, strutting his feathers, in a bid to impress the ladies. He then took wing, flying for about 15 km around Nanaj before he hit a power transmission line. The post-mortem indicated charring due to electric line collusion. 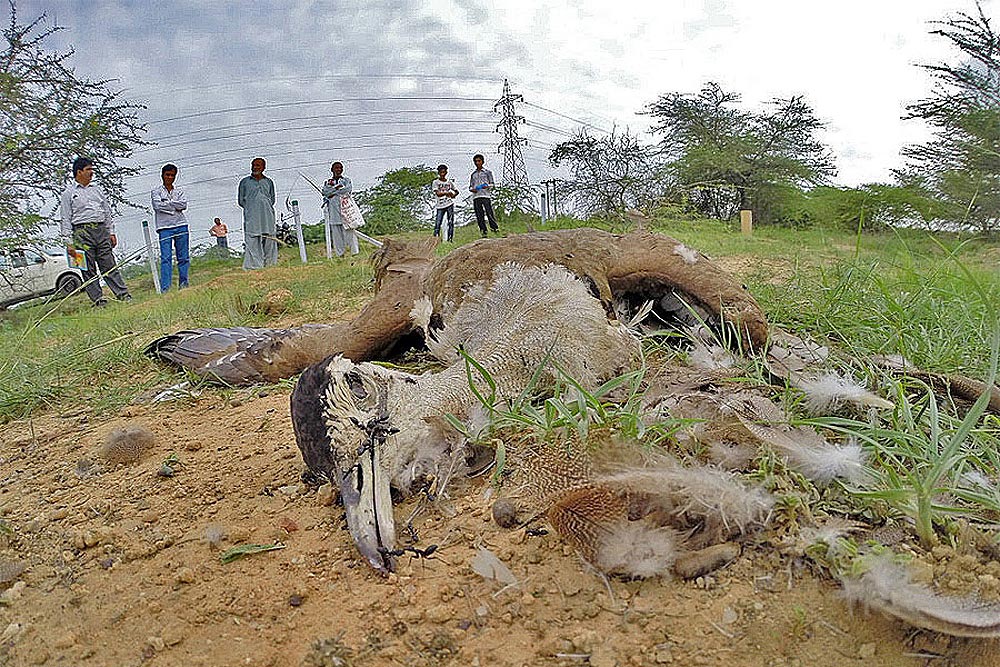 GIBs are tall, standing up to four feet, and being amongst the heaviest of flying birds, fly at low heights. Coupled with their relatively small binocular field, they are more prone to such collisions.  In the past decade, six GIBs have died as a consequence of collision or electrocution by electric lines. Alpha is the seventh.

GIBs are among the heaviest of flying birds, and with their relatively small binocular field, are prone to collisions.

With so few remaining, the loss of every bird is catastrophic, pushing the species closer to the brink. It’s imperative that transmission lines in and around at least 10 km of bustard areas be removed and replaced with underground cables. Transmission lines, though, are just one among a motley bunch of threats. Historically, widespread hunting for sport and food accelerated by vehicular access to hitherto remote areas, precipitated the bustard’s decline. The rampant hunting is indicated by records in The Oriental Sports Magazine—one Robert Mansf­ield bagged no less than 961 GIBs in Ahmednagar district, where none exist now.  Poaching appears to be a serious threat in Pakistan’s Cholistan desert—birds fly across the two countries, irrespective of hostile borders, and Pakistan has a small resident or transient population. According to a report, 49 of the 63 GIBs  sighted in four years between 2001-04, were hunted.

But the key cause of the near-extinction is the steady annihilation of its habitat, grasslands, a vital, vibrant ecosystem harbouring rare and endemic wildlife such as wolves, caracals, blackbucks, rhinos, pygmy hogs and, of course, bustards. Yet, grasslands and deserts are the most neglected ecosystems, as per a report of the Task Force on Grasslands and Deserts appo­inted by the former Planning Com­m­ission. Officially, in what’s quite a travesty, grasslands are designated as wastelands; and therefore degraded, diverted, des­troyed for real estate, industry, roads, mining, canals, agriculture.  ‘Greening’ deserts by pla­n­ting exotic trees, and well-intended schemes like the Indira Gandhi Canal in the Thar, change the ecology of the region, rendering them hostile for its xeric biodiversity.

Pesticides and changing crop patte­rns—a shift to mechanised farming and cash crops—have taken a toll too. Bus­t­ards are ground nesting birds, and hence very vulnerable to predators, and any other disturbance. A relatively new thr­eat comes in the form of wind farms, which have taken over swathes of bustard habitat in both the Thar and Kutch, further crunching its nesting areas, besides causing bird mortality. Renew­able energy is critical in an era of climate change, but its placement must undergo scrutiny for biodiversity impacts.

It is almost too late for the Great Indian Bustard.  Alpha’s death serves as a grim reminder of the extreme vul­nerability of the species. Former addit­ional secretary, ministry of env­ir­onment and forests and director of wildlife preservation, M.K. Ranjitsinh, fears an  imminent extinction, “Were this tragedy to occur, the GIB would be the first species in the history of India to have been allowed to go extinct,” he says. For it could go the way of the baiji, the Yangtze river dolphin, a species as old as 25 million years, which became extinct in 2002. In the seminal work, Witness to Extinction, author Samuel Turvey writes, “All that’s left on stage are the commemorative baiji statues. As for the baiji itself, it looks like it is the only thing not made in China anymore. Poor old Baiji. You deserved better.” Our Great Indian Bustard deserves bet­ter too. rip Alpha. Here is hoping that your death is not in vain, and stirs urgent action to save your kin.

Rocking To A Pardon