More from Sugata Srinivasaraju
View All

“When others were killing our children, you were able to save them.” Emotional statements are not the stuff of formal interactions between high dignitaries, but this is precisely what Polish Prime Minister Donald Tusk said to President Pratibha Patil during his visit to India in September this year. It was a clear indication that nearly 70 years on, the heartwarming story of hundreds of Polish children who found sanctuary in the princely state of Nawanagar in the Kathiawar region of present-day Gujarat during World War II is still remembered with gratitude in their homeland.

The celebrated ‘Kindertransport’ project, in which the UK rescued thousands of children from Nazi Germany and occupied Europe in 1938, finds an echo in the noble decision by Digvijaysinhji, the maharaja, or ‘Jam Saheb’, of Nawanagar to take in Polish children from war-torn, occupied Poland and Soviet prison camps. The Jam Saheb took personal risks to make the arrangements at a time when the world was at war, and when the exhausted refugees were denied entry at all ports. Digvijaysinhji, son of the legendary cricketer-prince Ranjitsinhji, built a camp for them in a place called Balachadi beside his summer palace, 25 km from his capital, Jamnagar, and made them feel at home. The Jam Saheb’s gesture is said to have paved the way for thousands of Polish refugees to be received in other parts of the world, including some other places in India. 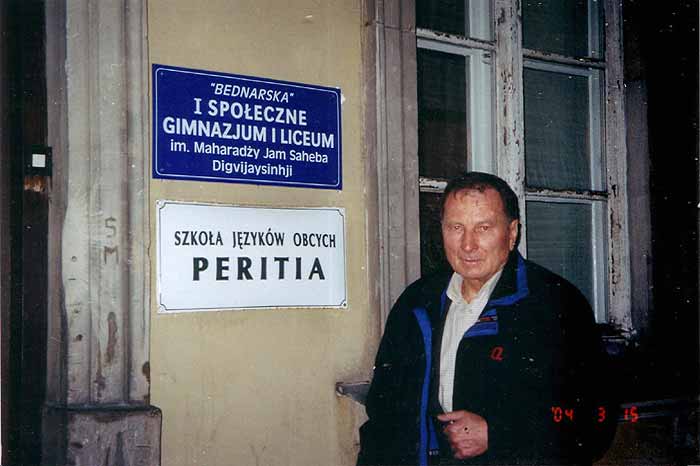 Roman Gutowski, a Balachadi boy, in front of the Maharaja Jam Saheb School, Warsaw, in 2004. (Photograph by Anuradha Bhattacharya)