Our children are waking up to a new terror-stained reality. And they're asking questions. 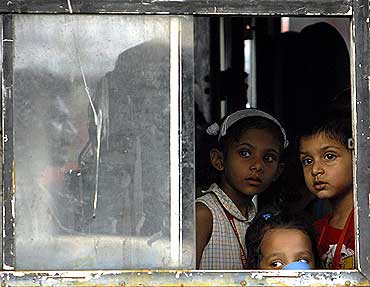 It's two weeks after the terror strikes. Psychologist Husna Vanjara, husband Omar and their four-year-old daughter Alaiha are on a drive. A line of fire engines, sirens blaring, slow the car down. Up ahead, they see the fire trucks head for a fourth-storey flat in a south Mumbai skyscraper that is ablaze. As the flames billow, sending plumes of smoke into the sky, Alaiha turns to her mother and asks, "Is it the Taj burning?"

Like scores of children in Mumbai, Alaiha watched the dramatic events of 26/11 unfold on television. The image of the Taj Mahal Hotel burning stayed with her. And that wasn't all—those nights, she woke up crying. Every time the doorbell rang, she feared 'bad men' would barge into their home. When she resumed school, she picked up the word 'terrorist' from school-bus conversations between older children.

Abhay Mehta, 6, watches his playmates in a swish south Mumbai apartment complex play 'terrorist-terrorist', now a favourite game. Lining up their friends against a wall, they go boom-boom with their toy guns, calling out the names of those who must "fall and die".

"When I told him on 27th morning that school was closed, his first question was: Was there a bomb blast? I nodded," says Sheetal Mehta, Abhay's mother and a former advertising professional. Like mothers, Sheetal struggles for appropriate answers—who is a terrorist, what do they want, can we shoot them and so on. 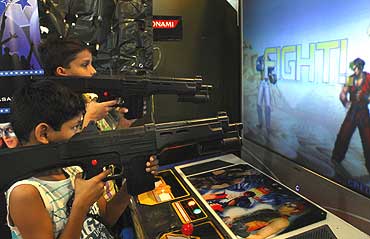 Fire! The fight is on at a video parlour

Post-26/11, the word 'terrorist' is part of a child's vocabulary. Worst affected, of course, have been the children rendered orphans. But no one, it seems, has escaped unscathed. The trauma has cut across class stratification, family status and background. Mumbai's youngest citizens are learning a harsh truth: they are not safe any more.

"Kids are scared even to let their parents go out for dinner," says child psychiatrist Pervin Dadachanji. "And it's a real fear: There were parents who went out for dinner and didn't come back." One of Dadachanji's patients, a 17-year-old girl, wants to sleep next to her younger brother so she can feel safe. At a post-26/11 workshop for 10-12-year-old boys at Campion School, Dadachanji found safety was the prime concern.

School principals have chosen to take the issue head-on this time around, organising workshops, condemning the terror strikes, urging children to think in terms of peace and unity. Teachers were forewarned to nip all "terrorist as Muslim" talk instantly, but gently. "This time I noticed that the P-word, Pakistan, is all over. Children are beginning to hate the country and say so. This is the sentiment we have to deftly tackle," says the principal of a south Mumbai school.

At Hasanat High School, a suburban school with 60 per cent Muslim students, there's an outward calm but the undercurrents are palpable. "I was dreading the first few days," says principal Pramila Kudva, "but I addressed the issue in the school assembly when we resumed the Monday after the attack. Our chief trustee was caught in the Oberoi firing but managed to get out. We said a prayer for him, then for everybody. My message: you are safe here. Then, I discouraged Muslim and anti-Muslim talk."

Some NGO volunteers working with slum children have attempted to address their trauma. Personal safety is not bracketed as a very salient category among slum children, as you would expect, but their sense of insecurity is higher than before, says a volunteer who spent last week largely answering questions in a Mankhurd slum.

Children cope with trauma in different ways depending on their age and temperaments, says developmental paediatrician Vibha Krishnamurthy. Children below six typically resort to regressive behaviour—bed-wetting, thumb-sucking and tantrums. Drawing can be cathartic. Recently, five-year-olds were asked to draw their impressions at Hasanat, as in other schools, and many came up with drawings of themselves with parents struck off or removed from the scene, a helicopter hovering atop a building, commando-like figures near a dome-shaped building, and plenty of guns.

Older children, according to Vibha, might show social withdrawal, or increased rebelliousness, eventually even a fall in academic performance. Extroverted children typically cope by immersing themselves in an activity, or confiding in friends; introverted children might grow more reticent. 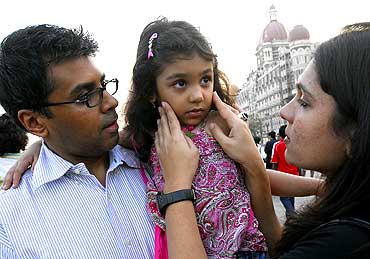 Vibha has been counselling children who lost parents in the attacks. First, they grapple with guilt. "Was it because I didn't finish my homework?" asks one pre-schooler. "Was it because Mummy was fed up with me that she went out to dinner?" asks another. The other hurdle is to understand death, and grapple with the fear that losing parents might mean their lives change forever. "Can my friend still come over for a play-date?" ventures one child. "Can I still go to the same school?" inquires another.

"First, I explain dying means your body stops working, the way a television set or a toy stops working," says Vibha. "Then I explain that this is not your fault, your mummy was a good person and so are you. Acknowledge that you don't know why such a bad thing happened to good people, and reassure the child that s/he will be looked after. Re-establish routine as soon as possible, keeping mealtimes, even expectations for behaviour the same."

For young adolescents, the emotional concerns are paired with queries—who were these terrorists and why did they do this? Rosina Mehra, mother of three, cautioned her older two sons, 13 and nine, against believing everything they are told. "I told my children that the terrorists were young people in difficult circumstances who were looking for direction and fell prey to this," says Mehra.

Sheetal too has been trying to tell Abhay: "don't hate the terrorists" because she wants him to grow up to understand and dialogue with people rather than hurt them. She adds: "The unthinking diet of violence that children feed on is scary. It makes them accept any violence that much easier. Abhay is not allowed to watch shows like Power Rangers, Benten or ShinChan."

Muslim homes have had to deal with more questions and greater insecurity. Zeenat Jaffer, a teacher of economics and Islamic studies took pains to tell her daughter, Rhea, 12—and her classmates—that the terrorists had little to do with Islam. Rhea has settled on the Fatimid civilisation, Muslim rulers of Egypt in the 10th and 11th centuries, for her project on world civilisations. It could help convey to her class "what Islam is really all about," says Zeenat.

Nagma Kazi has been telling her teenage children and others in their middle-class Muslim neighbourhood to "see the terrorists simply as terrorists, bad people". Nagma encouraged them to participate in demonstrations and peace marches. Every gesture helps, she says.

Dadachanji warned teachers at J.B. Petit School against giving communal colour to the terror attacks. "I told them to tell children that this is not about religion or India and Pakistan."

Once the fear has died down and the memory dulled, there will be no greater calling than to teach tolerance to Mumbai's youngsters. "I am asking Abhay to consider a friend's point of view, rather than smash it. I am teaching him to apologise more," says Sheetal.

"Tolerance needs to be taught at a basic level, whether it is for a child who is fatter than you or one who runs slower than you, or a child from another religion," says Vibha. "That is our best fight against terror."

By Smruti Koppikar and Payal Kapadia