Can life ever limp back to normalcy when nature unleashes such fury? We can only try. Updates 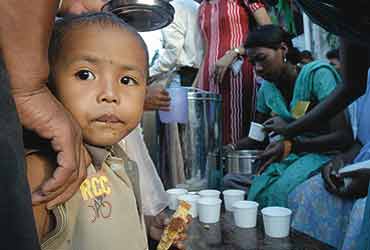 Veera and Samuel are a couple from the Nicobari tribe that dominates the island of Car Nicobar which was ravaged by the December 26 tsunami. Two days after the traumatic event, they were airlifted to Port Blair on a giant IL-76 aircraft. Samuel says: "We were terrified as the aircraft soared up and took to the skies. We had no idea of what the future held."

A week later, the Samuels are still shaky but the terror is beginning to fade. Now settled in a relief camp set up at the Nirmala Sen Secondary School in Port Blair, they are dressed in clothes donated by NGOs and the locals. With a sense of satisfaction, Veera says: "We have collected an entire suitcase full of clothes!" Clearly, the human spirit endures in the relief camps in these remote islands. According to official statistics, Samuel and Veera are among the over 21,000 displaced people housed in the various relief camps in the Andamans. These refugees are dependent on more than 1,000 tonnes of relief material that has come by. Creating a lifeline are the thousands of locals who along with several NGOs are involved in the Herculean task of providing a semblance of normal life.