Listen To Their Voice

The disabled can stand on their own feet with a bit of guidance and help. Ask Johar. 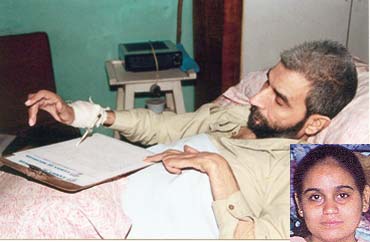 outlookindia.com
-0001-11-30T00:00:00+0553
Rajinder Johar was an occupational therapist at Lucknow’s King George Medical College when tragedy struck in 1986. He was hit by a bullet on the spine and rendered bedridden—a quadriplegic. But he was determined to do something constructive. Recalls Johar: "I got fed up lamenting or watching TV. After all, I could still see, hear, speak and think. Besides, I could use two stiff fingers and a thumb from some residual movement in one of my arms to type, turn the pages of a book and pick up the phone receiver." Johar knew he could function.

Thus was formed the Delhi-based Family of Disabled (FOD). Its objective was to help the disabled become self-reliant. Johar dashed off letters seeking support. The initial response was poor although.Baba Amte and Mother Teresa gave their blessings. Today, FOD, consisting of a staff of five including Johar as the coordinator, has helped 275 people through its Apna Rozgaar Programme (self-employment scheme). Those assisted include people from a weak socio-economic background.

Hence, Mataprasad afflicted by polio in both his lower limbs was able to set up a small shop in Delhi. Mentally challenged Pooja Jaggi, 23, runs a cloth shop and Mohammed Anis, 22, who cannot use his lower limbs, runs a grocery store. So how does the self-employment scheme work? When disabled people are referred by NGOs or hospitals, they are interviewed by FOD volunteers. An assessment of their disability and the kind of business/trade the person is interested in is made. Johar’s organisation then helps them set up shop and, instead of giving funds, provides merchandise which can be sold. FOD also advises them on how to run the business, keep accounts and where to procure stocks in the future. All this to ensure the beneficiaries are independent, earning members. Says Johar: "Normal people ill-treat the disabled. Even families consider them a burden. On the other hand, a self-dependent earning person is viewed with respect."

In 1992, Johar launched India’s first magazine on disability, The Voice of FOD. The organisation also provides aids and appliances to needy disabled people and counsels them. Much of the funding for the organisation comes from private donations although corporate and psu donors do chip in.

A winner of several awards, including the Helen Keller Award in 2003, Johar says he still has miles to go.

'Swindlers Will Be Booked'