We can only see this movie like fond parents who see their children acting in a school play. Ours is not to reason why, but only to indulgently smile. 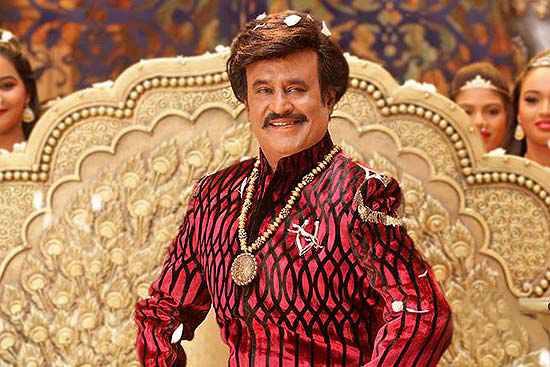 This movie could have been titled ‘Two Rajnis and a Dam’. Oh, there is also a temple in between. Much before Nehru envisioned dams as the temples of modern India, Rajni as the king Lingeswaran had already done it. The grandfather Rajni, a noble king, has to build a dam to save the villagers and the grandson Rajni, a petty thief, has to save the dam from a corrupt modern-day politician. In between, there are two villains, one a pre-independence British administrator and the other the quintessential Indian politician. And even as the two Rajnis despatch the two villains they have enough time to indulge in petty thievery, be a king worthy of a sage, sing a few songs, save a million souls and give one-line solutions to all of India’s problems. Wow, this is what a movie should be.

Lingaa is nostalgia in all its forms. We yearn for the good ol’ Rajni who looks just like he was earlier, who has lost a strut but not the swirl in his voice, and a story that brings back memories of Tamil films of rural landscapes and blouseless village girls who still manage to be fair and well-proportioned in spite of working hard in the sun. This image of women, some might say, is the ultimate nostalgia trip for many  Tamil men.

There is also nostalgia for a leader who can deliver us from all evils. When Rajni is around, whether as king or thief, everything is bound to be all right. He has one-line solutions for development, the importance of dams, of the need for children to go to school, and all castes eating together. When the villagers fight on petty grounds, he admonishes them and asks them to be Indians. Move over Tamilians, even Rajni wants us to be Indians first.

But this is not just any other Rajni movie. In Kochadaiyan, he was a superhero and that was where his unbelievable powers derived from. In Enthiran, he was a robot and hence able to do more than any other man could. But in Lingaa, he truly transcends his human limitations, his age and his sickness. He fights villains on a moving train with a panache that might make younger heroes jealous, and by the time the movie reaches the end, he has also learnt the art of flying. It’s a bird, it’s a machine, no, it is Rajni Sir. Superman, it is time to retire your underwear, cape and costume, for Rajni is back and flying high.

Immersed in this nostalgia for a kind king who gives away his wealth for the welfare of his people, for a true patriot who mocks the British, and for an actor who can smile even as he cries a la Sivaji, we can only see this movie like fond parents who see their children acting in a school play. Ours is not to reason why, but only to indulgently smile.