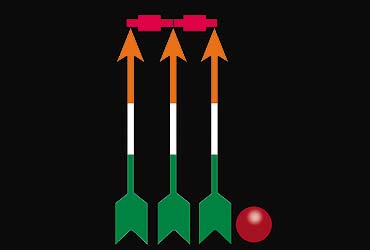 'Sledging' is older than the hills—certainly older than a hill of jelly beans—and, contrary to popular opinion, wasn't invented by Australians. The supremacy of a people in a particular field facilitates wild claims. Indians, being supreme at maths claim to have invented the zero, a claim recently disputed by Greek mathematicians.

There is, of course, epic evidence that the first 'sledger' was an Indian—long before the game of cricket was invented. The Mahabharata tells the story of the swayamvara ceremony of Draupadi in which her father and brother Drishtadyumna summons the princes of Bharat to compete for her hand. They come from far and wide. Drupad nurtures the ambition of his daughter being married to the supreme archer and royal Pandav, Arjun. But alas! They suspect him to have been killed by fire. The wish has transmitted itself to Draupadi, who loses her heart to this Arjun, hoping against hope that he will miraculously appear and claim her.

The ceremony begins; the competition is declared. Competitors are to shoot at the eye of a suspended spinning fish by aiming at its reflection in water. Several princes fail at the task. Then Karna, desirous of winning a noble wife, steps up to the crease. He examines the pitch and sizes up the difficulty of the opposing field. He presumably makes an estimate of the length and line of the arrow he is to score with. Draupadi, possibly sitting next to Krishna, is close to the action.

"I will not marry a Suta-putra (son of a charioteer)," she shouts to Drishtadyumna, just as Karna is about to shoot the shaft. The 'sledge' not only distracts him, it puts him off his stroke completely. He fails to score.

While Australian wicket-keepers seem to think that the most distracting 'sledge' is the claim that you have had dirty and recent sex with the batsman's wife, Draupadi pierced Karna with the most effective shaft of caste and class.

In the age of the Mahabharata it mattered, and the fact that Duryodhana had made Karna king of Anga, didn't seem, in Draupadi's eyes, to change his status. And the psychological warfare that has entered the noble game of cricket is all to do with the changing status of the mother country that invented the game and her colonies and now ex-colonies who adopted it, worship it and excel at it.

It is possibly no coincidence that Rahul Dravid has led his team to a Test victory over England in the 60th year of India's independence. We emerged clean from the shadow of colonialism 60 years ago. Our gentlemen and players, many of them Indian royals, were playing world-class cricket even then. But India was a basket case, an emergent nation, a leader, by sheer dint of numbers, of something called the Third World.

The last time we won a series against England was when we were led by Kapil Dev, a young man who was not a descendant of royals and proudly emerged from an emergent and proud north Indian peasantry in the '70s. His status was even then symptomatic of the forces and classes that were growing in atma vishwas in the country's public life.

When in the '60s, the West Indian bowler Roy Gilchrist began to bowl aggressively and frighten the gentlemen batsmen ranged against him, the rules had to be changed. It was even then a symptom of the nationalist defiance of the colonial Caribbean agitating for independence following the winds of change in the subcontinent and Africa. They were saying we play your game, but we play it our way.

The aggression of the present English players, Vaughan's tacit approval of their combative rudeness, is born of an attempt to imitate the soccer players who have replaced cricketers as the nation's popular sportsmen. Australians want to be Americans but cricket isn't American Football and so sledging and beamers, nudging opponents on the pitch and throwing jelly beans about have to substituted for satisfying, macho, bodily contact.

Today's individual Indian players and the team as a whole are stars in the country's firmament, occasionally turned into dark meteors by the hostility of the press. The country has been through the last decade celebrated as the great productive machine and market of the future. (China does not play cricket, but it will; it will as soon as the rule books have been accurately translated.)

We have bred, whatever its venal shortcomings, a capitalist class which is as arrogant as any other in the world and more rough and ready than most. Our popular culture reflects this development in a 100 creative ways and consumer habits. No wonder then that our cricketers have put aside Gandhian humility and Nehruvian gentlemanliness. They may even soon be called the Mayawati generation.

(Farrukh Dhondy is a London-based writer.)