Down one day, up the next. Will the Sensex settle down? 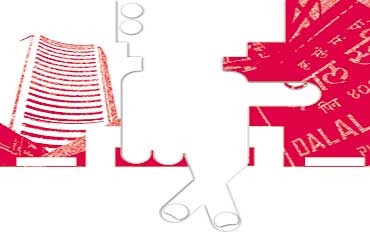 A month ago, the Sensex, at over 12600, seemed to have no ceiling. On June 15, when it was down 3000 points from that high, experts said they didn't know its bottom. As the two Indian market indices yo-yo wildly on a daily basis, no one is sure of their direction anymore. For whatever they predict on a given day is undone the next day. On June 14, when the Sensex was down over 400 points, experts stated the index was unlikely to regain its losses of the past few trading sessions. The next day, it was up over 600 points, making up 75 per cent of its losses during the first three days of the week.

Despite this extreme volatility—as predicted in Outlook's cover story (Those Fleeing Hoofprints, June 6, 2005)—there's a sort of 'sell' word that's looming large over the global markets. Even other hitherto booming asset classes—real estate, commodities and bullion—are witnessing a global downslide. So, what's happened in a space of a few weeks? How come the fiis are exiting emerging...