Light On His Dark Side

Veerappan as he is, stripped of the wronged-man image 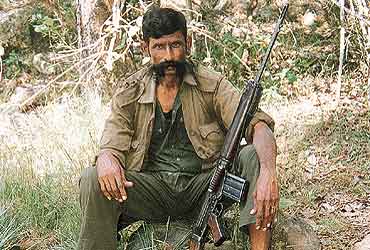 The history of Koose Muniswamy Veerappan is stark and grisly. In a criminal career spanning 35 years, he has accumulated a list of 119 murders and several kidnappings. He is accused of killing more than 100 elephants for ivory and of smuggling enormous quantities of sandalwood. He operates in the jungles on the borders of Karnataka and Tamil Nadu. Both states have deployed considerable police forces and have spent vast amounts of public money in trying to catch the bandit. Their efforts have been in vain and Veerappan remains at large to this day. Sunaad Raghuram has been vastly more successful than the police. Pen in hand, he has been chasing Veerappan for the past 12 years. In this immensely readable book, he has been able to capture him, alive and kicking.

Books which carry the sub-title 'The Untold Story' often whet the appetite without satisfying it. Raghuram's book is an exception. There are scores of first-person accounts, which throw authentic light on the dark central figure of Veerappan. We have, for instance, the anecdote of Veerappan listening to a radio news broadcast in which he is repeatedly called 'bandit', 'sandalwood smuggler' and 'ivory poacher'. To quote Raghuram: "Veerappan's eyes began to turn red with rage. The grip on his rifle tightened. He was livid. 'So these scoundrels use such words to describe me, do they? Do you know the kind of things they have done to my family? They have ruined my people and set fire to our village. There has been so much injustice, so much high-handedness. They think they can do anything just because they are in the government. Now they have the gall to call me names'. The rant continued for a long time." The gift of seeing ourselves as others see us is, obviously, not one of Veerappan's gifts. In his mind's eye the bandit sees himself not as a serial killer but as a social activist.

The delusion that he is a rebel with a cause is not confined to Veerappan alone. Thanks to the media, the delusion is widespread. In the wake of the Rajkumar kidnapping, numerous journalists participated in building a bogus mystique around Veerappan. The fact that Veerappan was a cold-blooded killer was deliberately forgotten. Because it made good copy, the media tried to turn him into an Indian version of Che Guevara. Raghuram's book is a welcome antidote. As he says in his Introduction: "My intention in writing this book is not in any way to lionise Veerappan, but to provide a narrative that puts him in context, and to explore the many aspects of his life and relationships."

There are many skeins to the story—the helplessness of villagers in forest areas before the predatory forest and police officials; the vacuum in local administration because of which a small-time poacher rises to national notoriety; the nexus between the bandit and the forest-police-politician network. Raghuram's narrative covers all this and more with the meticulous skill of an investigative reporter.

However, inside Raghuram the journalist there is obviously a novelist crying to be let out and he shows this in the deft touch with which he creates scenes and personalities. Real-life characters like Krishna Naik the postman and Selvaraj the poacher and for that matter, the author himself ("with my beard and the spot of vermilion on my forehead") seem to have stepped out of Malgudi. The style of narration, however, changes dramatically when he comes to the atrocities committed by the bandit on the one hand and the law-enforcers on the other. Here the story is told in the chilling, deadpan style of Truman Capote's In Cold Blood, the title incidentally of one of the chapters in Raghuram's book. When he comes to the farcical elements of the story, he uses deadpan prose with masterly effect in describing the keystone antics of the cops in the jungle, the daily display of the administration's weak underbelly during the Rajkumar kidnapping and the total disruption of activity in India's most high-tech city because of a bandit in a remote jungle.

This is a no-holds-barred kind of book and it does not hesitate to show that the rule of law is violated not merely by the outlaw but very often by the law enforcement agencies themselves.

(Mohandas Moses is a former home secretary of Karnataka.)