You can spot a veritable Who’s Who dining here, from Ratan Tata to Vijay Mallya 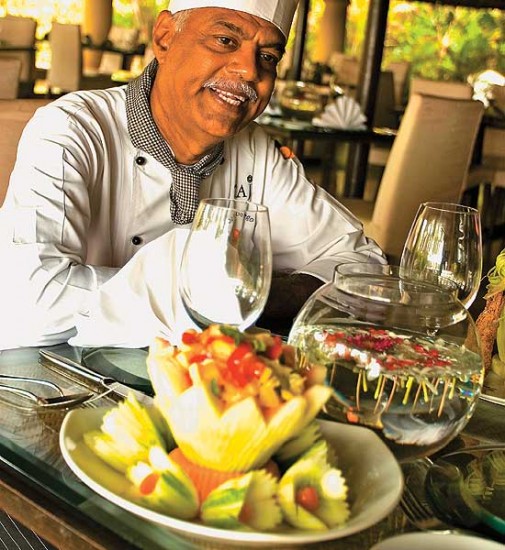 Urbano Rego is the grand-daddy of Goan cuisine—a culinary genius who has cooked for everybody from J.R.D. Tata to Margaret Thatcher. He’s officially designated executive chef of all the Taj properties in Goa, but he’s so self-effacing you’d never realise who he is. For example, when we came to Beach House, we asked to speak to the chef, to get his recommendations. We expected to meet some bright young sous chef, but Mr Rego himself appeared at our table. It was most embarrassing: like having the Pope himself come to take your confession. He recommended tiger prawns with coriander cooked in saffron, and pomfret cooked in Goan masala and topped with a spicy onion sauce—two of his signature dishes. We tucked into these with hot, soft pao and intriguing balchao-filled naans, another Rego invention. It was a simple yet memorable meal, which had us licking our fingers and mopping our plates with pao to catch the last, delicious traces of gravy. We almost had no space left for the dessert that followed, of coconut pancakes with jaggery sauce. You can spot a veritable Who’s Who dining here, from Ratan Tata to Vijay Mallya (who’s said to be very partial to Mr Rego’s clams-in-coconut). Beach House has a rustic ambience, and is charming in the monsoon, because it opens on to a tropical garden, which becomes really lush after the rain, scenting the air with a hundred different fragrances, from wet earth to frangipani blossom.