The pre-poll acrimony spills over, a fragile democracy is in test 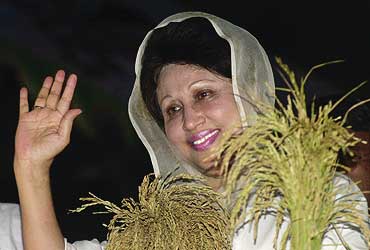 Bangladesh politics has an inglorious tradition: losers never accept the people's verdict gracefully. So, when former PM Sheikh Hasina rejected the October 1 election as a farce, most observers dismissed her repudiation as a vanquished leader's reaction, quite certain that she would eventually accept her defeat.

But the Awami League chief's seemingly inflexible attitude—not to join parliament—and her subsequent ultimatum to the chief election commissioner to "cancel the results by October 10 or else..." has raised fears of renewed instability that has haunted this nation through much of its history. It's unlikely that the commission would give in but the Awami League's threat to boycott parliament could deal a severe blow to the fragile democracy that had just begun to take roots—after nearly two decades of military and quasi-military rule—after the last dictator, Gen Hussain Mohammad Ershad, was swept out in 1990.

Although the caretaker government's role in conducting the election was mired in controversy, Sheikh Hasina's claim of widespread fraud in the polls was disputed by thousands of national and international election observers. "Barring a few, sporadic and regrettable incidents of violence, the polling on October 1, 2001, was generally free, fair, peaceful and orderly," the UN observers group said in a news conference.

According to the latest counts, the four-party alliance led by the Bangladesh Nationalist Party of Khaleda Zia has won 201 seats compared to the Awami League's 63.

The outcome was not entirely unexpected but what appears to have stunned even the most seasoned political analysts was the drubbing the Awamis received, especially for a party which led the liberation movement in 1971 and had ruled Bangladesh for the past five years.