Along with diplomats, buses and possible air links, this volume too may find place in track three diplomacy. 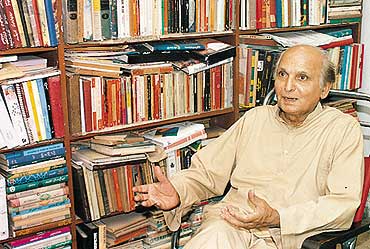 This is a more than opportune time for this volume of stories from Pakistan, and the fact that the Sahitya Akademi has published it makes it all the more significant. The 32 stories included here cover six languages, Urdu, Sindhi, Punjabi, Saraiki, Pushto and Balochi, although Urdu, predictably, has the lion’s share. The reader will find the usual suspects here, Manto, Hajira Mastur, Shaukat Siddiqui, Intizar Hussain, Altaf Fatima but there are other, less known (this side of the border) writers whose work is an interesting introduction to literature on the ‘other side’. Hussain’s all-too-short introduction draws attention to the political context in which Pakistani literature had to make an identity for itself, lacking, as it did, the continuity Indian writers could take for granted after Partition. He also gives a rationale for the emphasis on abstraction evident in many of the stories, locating the beginnings of this trend a decade after Partition, and firmly within the period of martial law where abstraction proved a useful device for writers to say the kind of things that may otherwise have been difficult.

The combination of two editors of differing ages and sensibilities results in an interesting mix of stories which cover basically the last half century, though the quality is uneven. But the question that dogs all such wide-ranging anthologies and obtains here as well is: whether it’s a good thing to have one translator for many languages. The problems are all too evident here with some translations being less fluent than others. Equally, a large number of editorial gaffes (like "My left feet was on the last spindle of the bamboo ladder and my right feet") mars the readability of an otherwise interesting volume. Perhaps this does not matter, as a volume such as this will be valued not only for its literary merit, but also for its political significance. Along with diplomats, buses and possible air links, this volume too may find place in track three diplomacy.