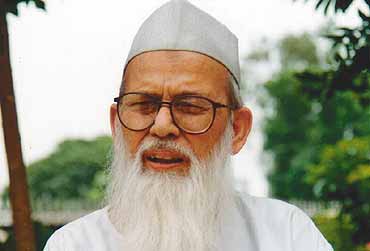 The hyped formula, which has dominated the news, was dashed off to the All India Muslim Personal Law Board (AIMPLB) on June 20. It doesn't contain anything that the Shankaracharya hasn't said before. Addressed to Board president Maulana Mohammed Rabbey Hasani Nadwi, the two-page letter written in English on behalf of the Jagadguru Sri Shankaracharya Swamigal has a five-point plan to resolve the dispute:


The Shankaracharya himself hasn't signed the letter. On his behalf, the letter has been signed by a secretary in the seer's office. The signatory is named "Srikaryam and Agent". If one forgets a few added finishing touches, the letter is almost a replica of the formula sent by the Shankaracharya to the Board on March 8, 2002, that had also suggested a legal solution to the disputed site and the building of a separation wall between the disputed site and acquired land.

Contrary to the media hype about the Shankaracharya having envisaged a mosque within 8-10 km radius of the disputed site, the subject of the mosque has not been discussed in the letter at all. The Shankaracharya's private deliberations with some Ayodhya residents indicate he is in favour of allotting land for the mosque at a nearby place.

The seer's letter also doesn't say anything about withdrawing Hindu claims on Kashi and Mathura. Neither has any promise been made to throw open 1,000 mosques under the asi. "All this is part of media speculation about the contents of the letter," says Maulana Sajjad Nomani, spokesperson for the Board in Lucknow.

In its initial response the Board has reportedly sought clarification from the seer on the construction plan for the temple. The temple plan, till now, includes the disputed site that according to the VHP houses the sanctum sanctorum.

The Infallibility Of Sage Advice