Let's Frame This Debate, Nail It And Hang It 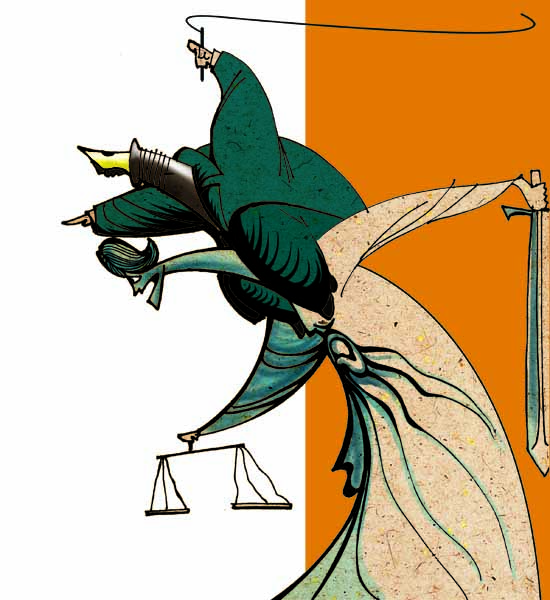 Illustration by Sorit
Hasan Suroor December 16, 2013 00:00 IST Let's Frame This Debate, Nail It And Hang It 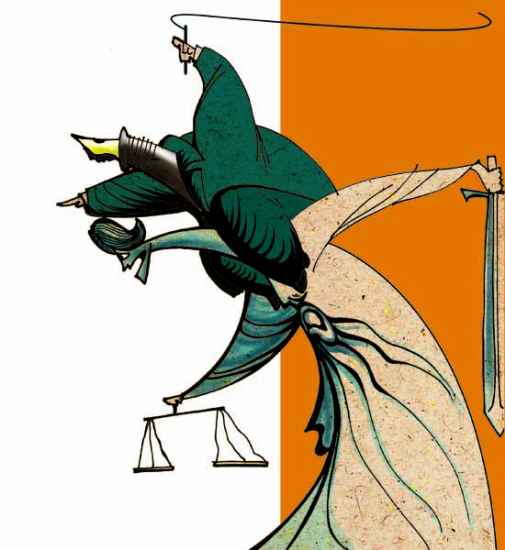 I am writing from a distance where I presume the newly anointed liberal furies won’t get to me. Once upon a time, lynch mobs used to roam the streets. After the Tehelka scandal, they seem to have moved into TV newsrooms, ready to pounce on perceived heretics. In the so-called debates on TV on the Tarun Tejpal rape case, I have seen fellow-liberals display disturbing levels of intolerance, the sort once associated with right-wing fanatics. A waspish illiberalism that belonged to the fringes has gone mainstream and become respectable: woe betide anyone who dares to stray from the script. Try offering a comment the TV vigilantes do not want to hear. You’ll be lucky to keep your dignity intact.

People with impeccable liberal credentials have been gagged or shouted down for suggesting that the law take its own course. Journalist Padma Rao Sundarji was humiliated and forced to shut up by NDTV anchor Barkha Dutt and co-panelists Shobha De and Kavita Krishnan. She had dared to say that the media “vilification of both the victim and the villain” was wrong and that, under the law, Tejpal had the right to have his “version” heard. The three-pronged attack so terrified her that she maintained a discreet silence for the rest of the discussion. On another show, Alyque Padamsee was bullied (as he put it) after an anchor interrupted him mid-sentence to chide him patronisingly that she was disappointed with him for cautioning the media against rushing to judgement. His offence: saying that it was for the courts to decide, and that, even if it was an open-and-shut case, the courts would have to hear both the prosecution and the defence. On one channel, the mild-mannered Anil Dharker’s argument against “media overkill” was smothered with high-decibel interruptions and he was effectively told to keep his unfashionable views to himself.

No one in his sane mind would support Tejpal. But, like it or not, we have the rule of law and a judicial process we are rightly proud of. Remember how we crowed about giving Ajmal Kasab the chance to defend himself? In the eyes of the law, Tejpal is deemed innocent until proved guilty, however unpardonable the alleged offence. The media cannot set itself up as judge, jury and executioner on the basis that the accused has forfeited all legal rights because of his despicable actions. This was the drift of the argument Padma and Alyque were trying to make when they were shouted down.

After CBI chief Ranjit Sinha's clumsy take on a one-liner about rape, the media tore him apart. Anyone who felt he may have been misinterpreted ran the risk of being labelled sexist.

In Britain, I am used to some heavy political correctness. I believe it’s not such a bad thing after all: in the long run, it helps in sensitising people to issues like race and gender; it also promotes a more civilised discourse. But what has been happening in the Indian media lately goes beyond political correctness. In my opinion, CBI chief Ranjit Sinha’s reference to a crude one-liner about rape was grossly misinterpreted: Sinha, in a clumsy way, had been trying to say the exact opposite of the blasphemous statement he was accused of making. That shrill reaction was of a piece with the more recent culture of “if you’re not with me, you’re against me”. Anyone who didn’t scream for Sinha’s dismissal was sexist. Many women have told me they didn’t share the hysteria over Sinha’s comments but were frightened to speak up. Many women—some of them self-avowed feminists, all of them outraged by Tejpal’s conduct—also believe the attacks on Shoma Chaudhury, Tehelka’s managing editor, have been “off the wall” and the self-righteous rage on TV news and discussions is overdone. It’s a dangerous trend, an attempt to muzzle opinion in the name of protecting women, a beastly slouching tow­a­rds censorship. The worst part of it is that it is led by the same liberal elite that over the years bravely fought for free speech, having defended Salman Rushdie, Taslima Nasreen, M.F. Husain, Shahrukh Khan and Kamalahaasan. I’ve watched excellent debates on intolerance on the same channels that are now shutting down debate.

Let’s not turn a principled fight into a bandwagon onto which fame-seekers leap, alienating genuine liberals. Politicians are being shameless: the BJP’s Arun Jaitley joked about “secular” rape; my old colleague and friend Chandan Mitra chuckled that “secularism is the last resort of rapists”. This is not only distasteful, it trivialises the issue. The lynch mobs in the TV studios should run after Jaitley, Chandan and their ilk not after Padma, Alyque and Dharker.

Television honchos have tried to claim high moral ground, saying they should in fact be complimented for having put Tejpal, a fellow journalist, under scrutiny and that, if they had ignored the story, they’d have been accused of protecting him. Clearly, that’s disingenuous, a clever-by-half attempt to obfuscate the real issue, which is not about choosing between zero coverage and overkill, as Dharker pointed out, but about striking a balance. More importantly, it is about the thrust of the coverage, which, in this case, has for the most part soun­ded like a media trial. Tejpal’s bail plea was fine-tooth-combed for flaws, friends of the girl were interviewed to debunk his claims.

What next? Summon the defendant to We the People for cross-examination? I’m surprised how some top lawyers have become a party to this extra-legal farce. Trial by the media has a notorious history and has been responsi­ble for gross miscarriages of just­ice. Alfred Dre­y­fus, a French army officer of Jew­­ish desc­ent, was wrongly convicted of passing French secrets to Germany largely bec­a­­use of an anti-Semitic press. The fin de siecle scandal remains an infamous example of how a media trial can influence public opinion and affect the course of justice.

The trend is more recent in India, and identi­fied mostly with the electronic media. To be fair, the partisan coverage of certain stories, especia­lly those involving high-profile public figures, is often less to do with political motives than with the pressure of the 24/7 TV news cycle. However, the Tejpal case is unique in that TV anchors are declaring that they have decided to “take sides” in order to highlight the enor­mity of the alleged offence and protect the victim against attempts to “intimidate” her. Sorry, you can’t continue to take sides once the legal processes kick in, however noble your motives. In Britain, media reporting is heavily restricted after a person has been arrested and charged. There are strict contempt of court rules to prevent biased coverage, and newspapers have been prosecuted for “taking sides”. Legal niceties apart, I’m concerned about the new “hang ’em, flog ’em” culture. Calm down before someone gets hurt.

(The writer is a former correspondent of The Hindu.)

Dhaka On A Drip