What stops India and Pakistan from discussing global issues? Only myopia 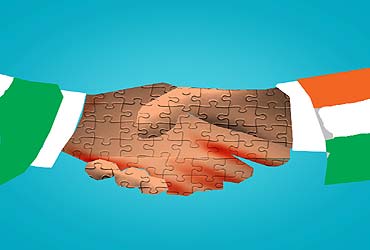 outlookindia.com
-0001-11-30T00:00:00+0553
The foreign secretaries' meeting has broken the ice that had formed on the Indo-Pak dialogue after the Mumbai blasts. Undeterred by the scepticism that greeted their announcement in Havana, the two have established a joint mechanism for dealing with terrorism to be headed by a senior official of the foreign ministry in each country. If all goes well, this trans-border 'standing committee', the first ever to be set up, will become the channel to request and receive sensitive information on terrorist activities being planned on the other side. Its success will depend on the trust that develops between them. This will take patience and effort to build.

The decision to locate it in the foreign offices, without involving the intelligence agencies directly, also makes sense. Although it is the latter that must do the actual legwork to supply information and investigate allegations, their history of mutual antagonism and each agency's firm belief that the other is still working to undermine the unity of their country makes it necessary for them to work through an intermediary agency.

But a checklist of issues the foreign secretaries discussed and decisions taken shows a preoccupation with bilateral matters that contrasts oddly with the increasing internationalisation of Indo-Pak relations in the last five years. The two sides agreed to release fishermen, start the survey of Sir Creek, begin truck services across the LoC, allow each other to set up consulates in Karachi and Mumbai, and update the visa regime. Why was there no exchange of information on the rebellion in Balochistan, the second attack on Bajaur, and the outcome of the Miranshahr agreement with the tribal chiefs of North Waziristan? Why was there no exchange on Afghanistan, the increasing NATO and US pressures on Pakistan, on Iran, North Korea, Iraq, Saddam Hussein's death sentence, Lebanon and the casual murder of democracy in Palestine?

One excuse: they fall outside the scope of the composite dialogue. That's utter nonsense. India never misses an opportunity to remind the world that terrorism is the most serious threat today. It's not unaware that the chaos in the Middle East is spreading eastwards like a dark tide and now lapping at the mountain ramparts of Pakistan. And surely, we cannot have forgotten in just sixty years that those mountains are also the ramparts of India?

These developments need to be discussed because for the first time since Independence, Pakistan and India face a common threat from outside, far more serious than the threat each has posed to the other. Pakistan is on the frontline. Its partnership with the US and NATO in Afghanistan is perilously close to sparking a civil war that could turn the entire tribal areas into a base for attacks upon Pakistan. But India is not far behind. The Al Qaeda-type outrages that began with the Diwali blasts last year and the increasing involvement of educated middle- and lower-middle-class Indian Muslim youth in these attacks shows we are already down that road. A US-UK withdrawal from Iraq or NATO withdrawal from Afghanistan could ignite full-blooded terror campaigns elsewhere, including Pakistan and India.

Silence, unfortunately, is not neutral. Not discussing the global scene when developments in it pose a dire threat to our existence carries its own message: it invites the conclusion that we hold diametrically opposed views and want to achieve different ends. Silence, thus, reinforces suspicions that each country's intelligentsia harbours about the other. In Pakistan, and among Indian Muslims, this absence of discussion reinforces the belief that India supports the US on isolating and sanctioning Iran and North Korea; backs its new friend, the US, and its old friend, Israel, in Lebanon and Palestine; and agrees with NATO that Pakistan is playing a double game in Afghanistan. It would not, therefore, mind if Pakistan were to be engulfed by civil war and disintegrate.

We in India similarly read Pakistan's silence as a refusal to acknowledge its problems in the west, and its intelligence agencies' over-willingness to accuse us of meddling in Balochistan and southern Afghanistan as an attempt by the Pak army to preserve the image of India as its number one enemy. From this it becomes easy to believe that it is still behind most, if not all, of the terrorism in India.

There is an element of truth in both sets of misgivings, but these can only be cleared and our attitudes changed if we acknowledge the seriousness of the common threats and discuss our interests. We missed an opportunity last week because foreign secretary Menon enjoys an exceptional level of respect and trust in Islamabad. But we can take these issues up at other upcoming meetings. An even better course would be to relax the ban on discussing political and international issues at the SAARC summit. That'll allow a great deal of harmonisation of policies on the sidelines.