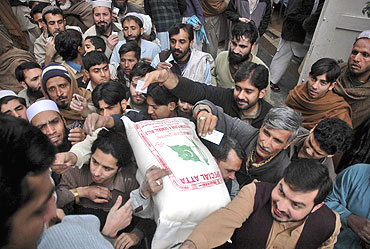 Gallows humour about the country's economic crisis pervades the political ambience days before Pakistan goes to the hustings. Symbolising the grim mood is a popular Urdu sms which reads in English, "No flour, no electricity, no water, no sugar, no cooking oil, no petrol, and if you too don't want to be around, then stamp Musharraf's cycle (PML-Q) on the ballot." Indeed, President Pervez Musharraf finds to his horror the story of Pakistan's economic miracle, scripted in breathless prose and spectacular figures, has reached an unexpected denouement—inflation has touched 11.86 per cent, food prices are soaring, and acute shortages of wheat, cooking oil, gas and electricity have the nation groaning in misery. And to think, barely two years ago, policy wonks cited the booming Karachi stock exchange and a near double-digit growth rate to justify Musharraf's rule. 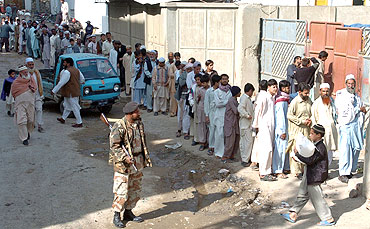 Today, the galloping inflation has eroded the purchasing power of the country's 160 million people, three-quarters of whom live on $2 or less a day (one dollar is equivalent to 60 Pakistani rupees). Food prices have risen by 10 per cent in each of the last three years; the price of...