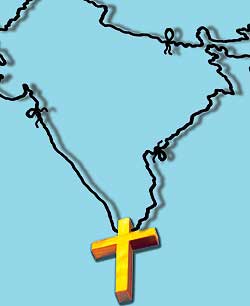 The recent violence involving the church and locals in Orissa and elsewhere has, it is said, sullied India's image abroad, put the Sangh parivar in a spot and evoked global sympathy for the "hapless Christians", the victims of those fascist Bajrang Dal goons.

The broad picture put out by the 'secular' media (Outlook included) mirrors the position of the Church: the missionaries only serve the underprivileged, they have no evangelical agenda. The Manuvadi vested interests cannot stand the emancipation of the hapless poor and hence resort to violence. Also, conversion from indigenous faiths to Christianity through fraudulent means is a bogey raised by the parivar to cover its black deeds. In short, the church's motives are pious and those of its opponents devilish.

But what are the facts? Were relations between the church and locals all hunky-dory before the arrival of the Bajrang Dal a few decades back? Will the problem disappear if the Sangh is exiled from the country? Are the allegations against the church a Sangh concoction? Finally, is it church vs parivar or church vs locals?

To find answers, we must go way back. Christianity came to India a few decades into its birth and remained undisturbed in the subcontinent till about 500 years back. It's the arrival of the missionaries—in the company of imperial forces—that shattered the peace. As Babasaheb Ambedkar writes: "The entry of the Catholic Church in the field of the spread of Christianity in India began in the year 1541 with the arrival of Francis Xavier. The Syrian Christians shrank with dismay from the defiling touch of the Roman Catholics of Portugal. The inquisitors of Goa discovered they were heretics and like a wolf in the fold, down came the delegates of the Pope upon the Syrian Churches". What followed was even worse.

Till the end of British rule, the missionaries were brazen about their intent. Hindu gods were abused openly. Writing about his childhood in Rajkot, Gandhiji says in his autobiography, "In those days, Christian missionaries used to stand in a corner near the high school and hold forth, pouring abuse on Hindus and their Gods." Decades later, Gandhiji recalled in Young India (March 4, 1926), "Though the preaching took place over forty years ago, the painful memory of it is still vivid before me." Obviously this practice was followed in the entire British India. If the "preaching" could leave such scars for so long on a person like Gandhiji, how do you expect a tribal to react to such humiliation?

Social reformers, from Dayanand Saraswati to Vivekananda to Gandhiji, have questioned the Church's 'real intent' and its methods at one time or another. Gandhiji said, "I believe there is no such thing as conversion from one faith to another in the accepted sense of the term...Christian missions will render true service to India if they can persuade themselves to confine their activities to humanitarian service without the ulterior motive of converting India or at least her unsophisticated villagers to Christianity, and destroying their social superstructure" (Harijan, Sept 28, 1935). Note the words, "destroying the social superstructure".

Post-Independence, the Church changed its methods. Open confrontation was dropped in favour of covert methods like inducements to target groups (the poor, illiterate sections). The new strategy, focused on specific areas, yielded a handsome harvest. A comparison between the census figures of 1991 and 2001 shows the growth rate of the Christian population was many times more that of Hindus in as many as 18 of the 25 states and UTs.

To carry out the sordid business of harvesting of souls, the Church now adopts a multi-layered strategy, full of prevarication and Janus-faced subterfuge. The church tells the elite it worships the Lord through the service of the poor and has no conversion agenda. But at ground level, there are overt attacks on other faiths. (The trouble in Karnataka followed the publication of a booklet, Satyadarshini, in which Hindu gods were abused). Protests against such insults are termed as attacks on Christians. Again, the right to evangelise is defended and exercised. 'Help' to the needy and subsequent conversions are explained as a 'change of heart'.

This is by no means Bajrang Dal propaganda. It is the substance of a 1956 report by the Niyogi Committee, which was constituted by the Congress government of Madhya Pradesh. In response, four Congress-ruled states—MP, Arunachal Pradesh, Orissa and Himachal Pradesh (in '07)—brought out laws to check such unethical conversions and maintain social harmony.

"The entire problem began because New Life was attracting poor people in distress and...offering money and property to convert," was how Father Austin Menezes of Mangalore described the work of the New Life Fellowship Trust whose actions sparked off the violence in the port city. ('Life As the Other', The Indian Express, Oct 23, '08). It's true that clashes between the Church and locals have become frequent and violent in the last few years. This was inevitable given the Church's plan to evangelise India in the 21st century. A Tehelka investigative report (Feb 7, '04) says "a new mood of aggressive evangelism has been emanating from America" and it has India as one of its key targets.

It is against this backdrop that one has to see recent events. The hapless Kandhamal tribals are under siege, fighting to preserve their culture, even their very existence. The Kandhs, once tribal kings, are now pariahs, hunted by the CRPF in their own land, painted as rapists/ murderers. Thousands have fled to the jungles. There is no one to speak for them. They don't interest our rent-a-cause NGOs and activists.

Arraigned against the Kandh tribals are the missionaries with their centuries of global experience in decimating local cultures. Backed with foreign funds, the Church is following its age-old divisive agenda of splitting local society into hostile factions. At immense human cost, it has reaped a rich harvest of souls. The share of Christians in the population of Kandhamal, just six per cent in 1971, had grown to 18 per cent by '01.

Kandhamal has witnessed violence earlier too, in 1994 and in 2007. The recent blowout came after the murder of Swami Laxmanananda Saraswati and his three associates. The Kandhs, 90 per cent of whom are Hindus, revered the aged swami. Over four decades, he had not only started schools and hospitals for them—in a sense, he helped them preserve their identity and ancient faith against alien onslaughts.

Who killed the 84-year-old swami? Sabyasachi Panda, the Maoist leader who owned up to the killing, said the swami was eliminated for reviving Brahminism. Strangely, Panda turned a blind eye to evangelism. But he divulged an interesting fact—that the Christian Panas (an SC group) provides cadres to the Maoists in Orissa.

I for one don't know how to reconcile evangelism, which believes in the harvesting of souls, with Maoism, which believes there's no soul. In Europe, wherever Communism succeeded, the Church had to go underground, if not disappear. But in Orissa, perhaps there is some kind of 'strategic alliance' happening. Did the Church outsource the swami's assassination?

Now to the alleged rape of a nun in Kandhamal. Such 'Rape of nun by Hindu fascist' stories have turned out to be false in Jhabua, Jajjhar and Baripada in the past. Unfortunately, by then the 'hot story' had gone cold for the media. We are witnessing another edition of this in Kandhamal. The nun would not attend the identification parade, the SC ruled out a CBI inquiry, but the National Commission for Minorities still jumped into the fray. Is the nun a pawn in the church's game of chess?

It's all a result of what Gandhiji called the destruction of the "social superstructure". India is steeped in a pluralistic ethos and believes God is one, irrespective of his numerous names and shapes. The Church has faith only in "one God". The rest, to it, are false. Wouldn't it be better if the church heeded Gandhiji's words and left people to their faith?

(The writer, an RS member, can be contacted at punjbk@gmail.com)