Left To Their Own Devices

While the rescue efforts have brought pilgrims to safety, help is yet to reach Kedar’s own people 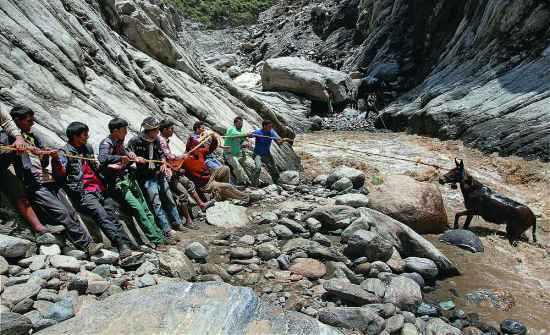 The streets, the trees, the courtyards are wet with rain. And people’s eyes are wet with tears. The sky is covered with clouds, dark and ominous. The Mandakini roars in rain-fed fury, the rescue choppers overhead now and then break the dead silence of the valley, its villages, its villagers. There’s very little the people here have to say, but their pale faces and their sorrowful eyes speak fear. These are the people of the valley, who’ll be here rebuilding lives long after the last pilgrim is rescued and home-bound.

Roads, mountain paths, houses, whole hamlets have been washed away, with them the hopes of locals. The rain and landslides won’t let them resume their livelihoods. There is death everywhere: hundreds of bodies have been found and cremated, but many are rotting in inaccessible places or have become part of the riverbed, the soil.