A resurgent Congress is banking on its '70s heyday spin 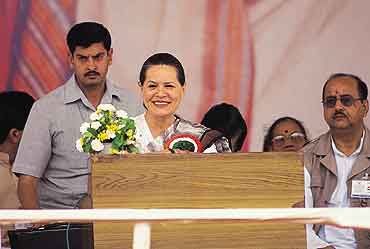 outlookindia.com
-0001-11-30T00:00:00+0553
The first-ever Congress convention for grassroots-level workers last fortnight was marked by a definite leftward shift in party policy. The line spelt out by party president Sonia Gandhi makes it clear it is attempting to recapture its traditional role as champion of the underprivileged. Party leaders and the rank and file (who shared the platform) were in consonance that unemployment, farmers and labourers, poverty alleviation and Dalit welfare—these ought to be the buzzwords hence. The consensus was that Manmohanomics wasn't winning the party votes.

Congress LS chief whip Priyaranjan Das Munshi says the policy shift will be reflected not just in the party's poll campaigns but also in Parliament. The convention's success has showed that the Congress is in good fighting trim at least at the grassroots level, so expect it to be in aggressive mode when Parliament reconvenes for the second half of the budget session on April 7. Sonia is also reorganising the party set-up, appointing new pcc chiefs, inducting younger leaders etc.

As for disinvestment, the Congress is preparing for a frontal attack and has asked for a separate discussion on the HPCL/BPCL issue. Congress support for reforms-related legislation also cannot be taken for granted. "We have decided to unequivocally oppose bank privatisation," says Das Munshi. On labour reforms also, a section in the party is strongly opposed to the proposed amendments in the Industrial Relations Act and the Contract Labour Act. And although an internal panel approved the Electricity Bill, it may insist on incorporating amendments.

The Congress is still giving "substantive shape" to its "neo-socialism", says Salman Khursheed, head of policy planning. Discussion papers at the convention, reflected in Sonia's address, centred around job creation, boosting agriculture, curbing disinvestment of profit-making psus and a better deal for Dalits and tribals. "That's the message block presidents will give voters back home," Das Munshi observes.

At the convention, Khursheed also voiced a demand for a quota for Dalits and tribals in the private sector, evoking an enthusiastic response. Some leaders now feel the slogan may click in a big way among the very sections the Congress is trying to win back into its fold.

Another contentious issue was that of alliances. As expected, there was much heartburn over the continuing alliance with Laloo's Rashtriya Janata Dal in Bihar. Partymen also expressed unhappiness at the alliance with the Mufti's pdp while a section of the Maharashtra unit wanted to break with the ncp. As for future ties, the UP workers were opposed to a tie-up with Mulayam's SP, while the TN unit appeared sanguine about the ongoing talks with the dmk. "The workers' sentiments are one thing, but the party's overall interests have to be kept in mind," says cwc member Ambika Soni.

Many block presidents who spoke at the convention hit out at the party's senior leaders, piqued at their ignoring the workers' contribution and the constant infighting. Sonia, who made it a point to listen to everyone who spoke, appeared at ease. Sources say she'll keep their concerns in mind when the pccs are reorganised. In terms of boosting morale, the convention was effective with the Congress looking confident after a long time. "We've put the Gujarat defeat behind us...and savoured the victory in Himachal Pradesh," says MP Prithviraj Chauhan. The proof of how far they have overcome their inertia will come as soon as the assembly polls in November.