A seasoned politician and a seasoned actor seek votes, one on his own steam, the other on Modi’s 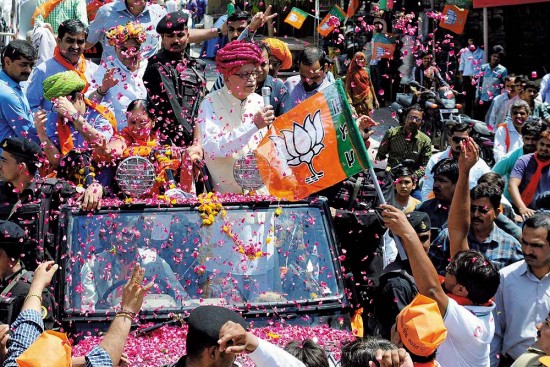 It’s an Indian election finally. Even amid this dead-serious business of choosing the next government, it’s hard to keep away the quaint filmi touch. So old patriotic favourites like Mere desh ki dharti, Apni azadi ko hum and Chhodo kal ki baatein blare out loud, minutes before veteran BJP leader L.K. Advani gets talking to the ‘buddhijeevi’ and ‘prabuddha naga­rik’ (intellectuals and enlightened citizenry) of his constituency, Gandhina­gar, at the Rajnath Club. In his patented formal Hindi, he holds forth on having been a witness or a participant in every general election since 1952. He talks of the ballot system in the 1952 elections, how it changed over the years and how it’s imperative to make voting compulsory. As his speech winds on, a palpable restlessness builds in the air, manifesting itself in loud murmurs, incessant impolite chatter, stifled giggles and claps. Soon, this breaks out into full-fledged Modi sloganeering from scarf-clad BJP workers, clearly in a mood to drown out Advani’s nostalgia with the urgency and frenzy of today’s politics.

It’s all too clear. If the BJP were a family, then here was the grandfather facing the impetuous new order—whose mood is quite akin to that of the frontbenchers who testily clap away the documentary before the feature. They don’t have the patience, inclination and bandwidth to grasp anything beyond ‘Modi sarkar’; in New Delhi, of course. In the posters at the venue, Modi dwarfs all, be it Advani or Rajnath Singh. Modi buzzwords are strewn on the walls. Even the weather in Gujarat must seem inclement to Advani. Last Sunday, his roadshow—from Umang tenement in Nirnay Nagar to Gurukul Drive-in—almost got wiped out by a terrible, unexpected storm. “Even Advani seems to have been blown away by the Modi tsunami,” a local journo quips.