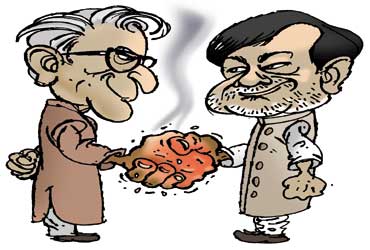 outlookindia.com
-0001-11-30T00:00:00+0553
The Samata Party is a political outfit with as many leaders as MPs. It has 12 Lok Sabha berths and three ministers. Besides, the nda convenor's post is held by its leader George Fernandes. The tiny, mostly Bihar-based party has been rife with ego clashes and power tussles are common between its two top leaders—Fernandes and Union railway minister Nitish Kumar. The latest being the proxy war between the two over the appointment of Digvijay Singh in the railway ministry.

Digvijay, formerly mos in the rail ministry, was recently shifted to the commerce and industry ministry. Unhappy, he lobbied hard with Fernandes to get a toehold in his old ministry. Some two weeks ago he was given additional charge of railways. That's when Digvijay's troubles began. By then his senior Nitish Kumar was ensconced as Union minister in Rail Bhawan. Sources say that Nitish

didn't like the fact that he wasn't consulted by Fernandes.

Jaya Jaitly, ex-Samata president and confidante of Fernandes, says: "Digvijay is a young dynamic leader and after wto there is not much work in commerce. That is why it was felt he should get some additional responsibility." Nitish disagrees: "Commerce is the most sensitive and important ministry."

Nitish is also reportedly miffed at the way Digvijay conducted himself. The day he got additional charge of railways, he landed at Rail Bhawan to reoccupy his old room which had by then been allotted to the other mos, O. Rajagopal. It was then that he was informed that as a minister holding additional charge he was not entitled to the old perks and rooms.

Though Digvijay has regained possession of his room, he hasn't been allotted any work. Says Nitish: "When he was shifted to commerce, I handed over his work to Rajagopal, who's handling it efficiently and is not overburdened." Sources say that Nitish has no intention of allotting any work to Digvijay in a hurry. A further cabinet expansion is expected in mid-September, after which it will be clear who stays in railways and who goes. To compound problems, Samata MPs believe that Fernandes could have promised railways again to Mamata Banerjee who is seeking re-entry into the nda. If true, this will further sour relations between Fernandes and Nitish.

Meanwhile, a campaign has begun in the Samata Party to get Digvijay dropped from the council of ministers. MP Prabhunath Singh says: "If Georgesaab was consulted by the PM about Digvijay, then he should have taken Nitish into confidence. The party should now take action against Digvijay for he has been running a campaign against Nitish." Rajeev Ranjan Singh, another Samata MP, says: "Does Digvijay think he'll get work by planting stories against Nitish?"

Samata sources also claim that Digvijay misused railway facilities. He apparently used an escort car manned by the Railway Protection Force (rpf) and had access to its wireless. Some members of the rpf were given special training, dressed in black like commandos and often given the duty of escorting Digvijay. Says a senior Samata leader: "He moved like a raja with his own little army." Sources claim that he was also particularly fond of his railway salon; whenever he went home to Bihar he virtually lived in the air-conditioned salon. Nitish has now put a stop to the rpf doing any escort duty. Says he: "If I don't need an escort car, why do others?"

Like all the political forces emerging out of the socialist movement, the Samata remains a volatile entity. There is no doubt that the two big leaders are conducting a proxy war over Digvijay. If Fernandes is persuaded by his MPs that Digvijay has become more of a liability than an asset, then the issue will resolve itself. And if Digvijay is indeed dropped, then it will indicate that the quiet Nitish Kumar may choose to let Fernandes hog the limelight in Delhi, but when it comes to the crunch he is no pushover.

Actually, it's the colourful Prabhunath Singh who has the last word. Referring to the fact that Digvijay was minister in waiting for Pakistan President Pervez Musharraf, he says: "He should be dropped because of the praise he has heaped on the man responsible for Kargil. He described Musharraf as a 'zinda dil aadmi'. Does he mean that Vajpayee is a murda dil?"