Law Makes A Leap Of Faith 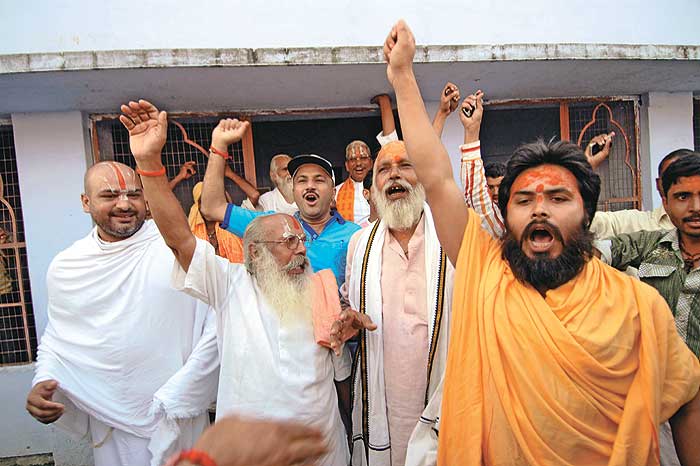 The politics of Lord Ram got some divine sanction from the law. A movement that had been spent, an issue that had collectively exhausted the nation, a politics that had been virtually abandoned, was given a new lease of life by the three-judge bench of the Allahabad High Court. They were all quite magnanimous about matters of faith. They gave primacy to the “belief” that the disputed site is the birthplace of Lord Ram. In doing so, they also gave respectability to the movement led by the VHP and BJP leader L.K. Advani that culminated in the demolition of the Babri Masjid in 1992, seen by many as a criminal act for which cases still continue.

“We are disappointed with the verdict, which appears confused by suggesting this three-way partition. We feel it goes against Muslims.”
Sadique Ahmed, Jamaat-e-Islami leader

Was this the majesty of the law or the primacy of faith? All the three judges gave separate judgements but the majority agreed to divide the disputed land at Ayodhya into three parts—one held by Hindus, one by the Nirmohi Akhara (a Hindu outfit) and one by the Muslims. A two-thirds victory technically for the Hindu side but really a decisive win for them. The little piece of land that will now be the right of Muslims will actually be an embarrassment for them, and could be used to corner them once again. All those dark emotions, the collective humiliations will now be recalled by the community.

As for the janmabhoomi votaries, it was their judgement day all the way. Consider the views of the three honourable members of the bench. Justice Sudhir Agarwal concluded that “the area covered under the central dome of the disputed structure was the birthplace of Lord Rama as per faith and belief of Hindus”. He also said that “the building in dispute was constructed after demolition of a non-Islamic religious structure, i.e., a Hindu temple”. Justice S.U. Khan, meanwhile, concluded that “no temple was demolished for constructing the mosque” and the “mosque was constructed over the ruins of temples which were lying in utter ruins for a very long time” and that “after some time of construction of the mosque Hindus started identifying the premises in dispute as exact birth place of Lord Ram”. 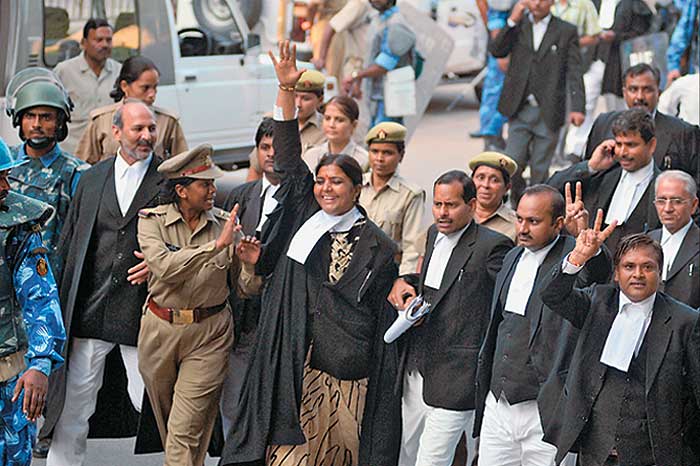 “I call upon all our countrymen, including Muslims, to forget the ill will and become active collaborators in building the Ram temple.”
Mohan Bhagwat, RSS chief

The views uploaded on the Allahabad High Court website citing Justice D.V. Sharma make for the most revealing reading. “The disputed site is the birthplace of Lord Ram,” he states decisively, because “place of birth is a juristic person and is a deity. It is personified as the spirit of the divine worshipped as birthplace of Lord Rama as a child”. He also dwells on some philosophical matters—“spirit of the divine ever remains present everywhere at all times for any one to invoke at any shape or form in accordance with his own aspirations and it can be shapeless and formless also.” He does not hesitate to pronounce judgement on Islamic law too—“the disputed building was constructed by Babar, the year is not certain but it was built against the tenets of Islam. Thus it cannot have the character of a mosque”.

These are remarkable judgements because, in a manner of speaking, they comment on whether God exists, or more specifically that Lord Ram did, and was born at a particular site! Most observers expected the judgement to be based on cold facts and not be a claim of faith. Legal experts say these are matters on which high court judges are not expected to comment. Indeed, the question that may be asked is, now that the legitimacy of the claim has been established in a court of law, do we therefore judge the Ramjanmabhoomi movement as a legitimate agitation and end all the criminal cases? 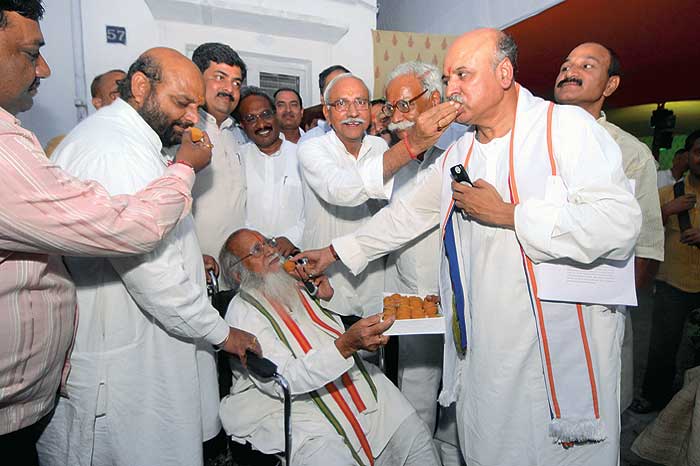 “Judgements should not be made on the basis of faith. I’m deeply shocked by the verdict. I feel as numb as I did on the day the mosque fell.”
Shahid Siddiqui, Editor, ‘Nai Duniya’

The Muslim side has frankly been shocked and stunned as it had actually been expecting to win on the title deeds. They’ll appeal in the Supreme Court, but will have to be circumspect in all future moves as the RSS-VHP-BJP combine now feels its entire case, movement and politics have gained respectability. They would therefore use every opportunity to hammer home the point about “Muslim obduracy” and engage in a discourse that stokes old faultlines. Zafaryab Jilani, the lawyer for the Sunni Waqf Board, has said the matter will be appealed in the Supreme Court. “This is not the end,” he says, “the verdict will be final only when the Supreme Court decides so. If the apex court also rules against us, then we’ll abide by it.” Nai Duniya editor Shahid Siddiqui expresses the community’s anger: “No judgement should be made on the basis of faith. It should be made on the basis of hard evidence. I’m deeply shocked by the verdict. I feel as numb as I did on the day the mosque fell.”

More shocking twists and turns to the traumatic Ayodhya issue could be awaiting the community. For one, the BJP—which had been expecting a legal defeat—is hugely relieved. The party will use the verdict to embrace even greater respectability. Sources say a section of the party will even be pressing for what will be called a “magnanimous gesture” towards Muslims. In other words, they’ll suggest that Muslims should be allowed to build a mosque on the one-third land they have been given as long as a temple too is built. The attempt, therefore, will be to project the Muslims as the churlish party unwilling to give in to Hindu generosity. The argument and the secular-communal divide would actually have been turned on its head. 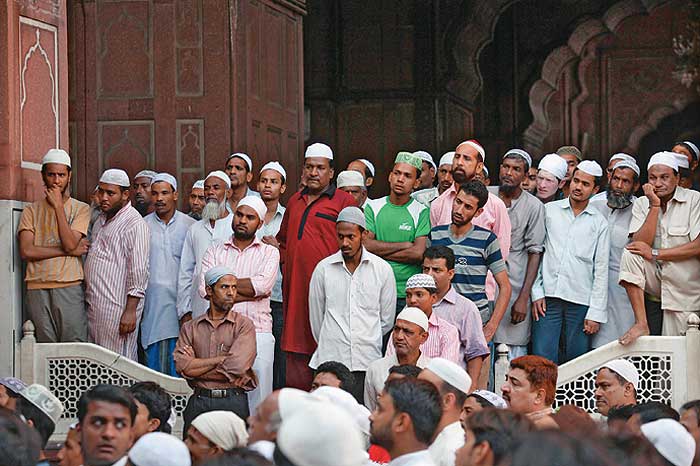 “If there’s any feeling of injustice or hurt, one could exhaust all possible legal avenues. Till then, we must not anything to undermine peace.”
P.K. Kunhalikutty, IUML General Secretary

On judgement day, the parivar acted in concert. A decision had been taken that RSS chief Mohan Bhagwat would be the first to speak and give out the line after the verdict. Since he had every reason to be content and had no grouse against the court, he sounded almost statesman-like. “It should not be seen as a victory for any group or defeat for another,” he said. He also asked “all countrymen, including Muslims” to forget past acrimony, and become “active collaborators” in constructing the Ram temple.

Smug in its “victory”, the usually lumpen VHP too was a picture of calm and composure after the verdict. Dholakwalas were brought in to launch festivities at their press office in Delhi but then sent away after some senior functionaries decided it would be against the restrained mood. Sweets, though, were distributed widely. Praveen Togadia, with a big grin on his face, said, “We have appealed to all Hindus for restraint in their celebrations. We will collaborate with the police to maintain calm. Celebrations for us will take the form of distributing sweets and singing hymns to Ram in our homes and temples.”

“We were pretty sure the verdict would be in our favour. We don’t accept it, but will respect it. We will go to the Supreme Court.”
Maulana Athar, Ali All-India Ulema Association

The advocates of Ramjanmabhoomi will now sing bhajans and enjoy the sudden legitimacy their movement has acquired. The BJP, meanwhile, has called for “inter-community amity and a fresh start”. For the Muslim community, though, it is a sad judgement. Extremist elements who maintain that the Indian state, police and judiciary can never deliver justice to minorities will find one more reason to tell moderates ‘we told you so’. The kind of historical memory and narrative that drive extremist ideology will get one more story. The tale of a mosque being demolished, bloodbaths across the country, justice delayed, and now apparently, denied. The older generation which has a collective memory of the Ayodhya movement will be more sad than angry. As the Sangh parivar begins to project its “generous gestures”, Muslims will be further humiliated.

In the prelude to his order, Justice S.U. Khan writes: “Here is a small piece of land (1,500 sq yards) where angels fear to tread. It is full of innumerable land mines. We are required to clear it. Some very sane elements advised us not to attempt that. We do not propose to rush in like fools lest we are blown. However we have to take risk. It is said the greatest risk in life is not daring to take risk when occasion for the same arises. Once angels were made to bow before man. Sometimes he has to justify the said honour. This is one of those occasions. We have succeeded or failed? No one can be a judge in his own case.” The three good men have therefore left it to Lord Ram.