Nostalgia and trivia poured out in Gulzar's interaction with the viewers. 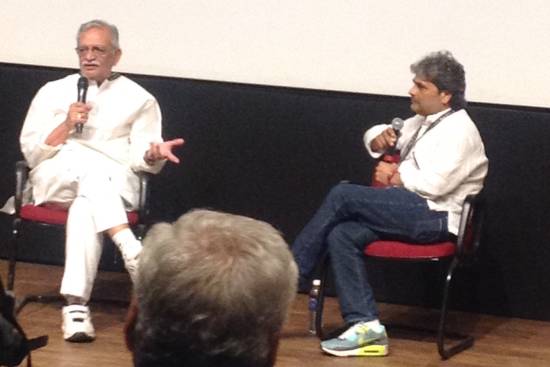 The rare screening of Libaas at IFFI2014, for which I&B ministry has now been served a notice, was also the first time Gulzar’s own family and close friends watched it. “Libaas laundry mein dhulne ko bheji thi par lagta hai dryclean hokar aayi hai jo itna samay lag gaya,” he said, while introducing the film to a packed Maquinez Palace auditorium in Panaji.

The filmmaker was himself watching it after almost two decades. In his own inimitable way he confessed being curious about it: “Dekhein madari ke thaile mein se kya khargosh nikalta hai. I wonder how finished or unfinished it would look now. Taali milegi ya gaali.”

Applause it was, resounding one at that. No wonder after the screening he was a visibly happy man. He didn’t find the film too dated or old. Perhaps because the human relationships that it deals with are timeless and universal. “Bas unki nayi tahein khulti rehti hain,” he said.

Nostalgia and trivia poured out in the interaction with the viewers. How the much loved pre-interval "Mukherjee scene" was done entirely in one shot by Naseeruddin Shah and the close-ups were inserted later. How Raj Babbar was a friend of the producer. How the character of the down and out theatre artiste Jamaal, played by Utpal Dutt, was based on the actors of the silent era who "lived in a lost glory". One of them was Wazir Mohammad Khan who was an actor-singer in Alam Ara and later lip-synced Manna Dey's famous "Aye mere pyaare watan" on screen in Bimal Roy's Kabuliwala.

Gulzar spoke of the deliberate lack of choreography in his film songs (save in Kinara and Lekin), something he learnt from his guru Bimalda. Daughter Meghana, aka Bosky, noticed even the smallest props. She recognized a razaai used in the film as their own. Gulzar felt that whatever was left incomplete or unsaid in Libaas was completed by him in Ijaazat. Many years after having made Libaas, he rewrote the script as a story called Chaabi (Key). It was also published with another title—Seema, after the name of the film’s heroine.

Ink On Your Hands