Joshi presented a classic management 'problem'. Will the IIMs be better for it? 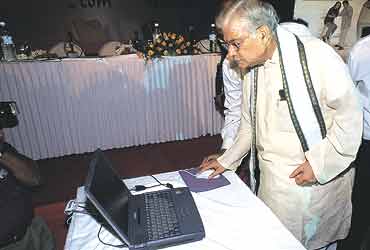 outlookindia.com
-0001-11-30T00:00:00+0553
Dr Murli Manohar Joshi is no longer in power. The ex-HRD minister’s controversial plans to cut fees in IIMs, have a common entrance exam for all B-schools, or route donors’ money to their alma mater through his ministry have been dumped by the new upa government. The strong fight that professors, students and alumni put up against Joshi’s bid to rip apart their institutions’ autonomy and quality standards seems to be over. "It’s a vindication of the fact that we were right all along," says a happy Anup Sinha, dean (programme initiatives), IIM-C. In the past few months, normalcy seems to have returned to the campuses of the six IIMs.

There’s also a sense of relief. "During the controversy, there was a sense of apprehension and we were worried about the future," says Shashwat Sharma, a student at IIM-A. Adds Rajat Nebatia, a second-year student at IIM-L, "We feel safe and secure again." And M.V. Rajeev Gowda, IIM-B professor, regrets that an entire year was lost debating and discussing "non-productive issues". In those days, all that one could hear on the campuses were vocal diatribes against Joshi. "Now there’s no talk about politics," feels Sameer Mahandru, ex-president of the IIM-B students’ council.

In certain quarters though, there’s a sense of despondency. Especially among people who supported Joshi. One of them is Devi Singh, IIM-L director. "The controversy vis-a-vis Joshi was rather unfortunate," he says. "His ideas should have been discussed across the table. Instead of helping the IIMs, it only hurt us. Personally, I feel a series of dialogues could have resolved all issues. However, all that is a thing of the past."

But old fears still linger in the air. At IIM-A, which was at the forefront of the resistance to Joshi’s proposals, its professors are hesitant to talk about the "nine-month nightmare" and add: "Let us work now, we don’t want another controversy." The students too are cagey. As one of them puts it: "There’s still no permanent reassurance that another political attempt will not be made on our institution." The fact is that Joshi is a Rajya Sabha member and the nda could come back to power some day. And the good doctor is a man who holds grudges.

Between these mixed feelings of jubilation, relief and fears, one thing is quite clear. Life in IIMs will never be the same again.

For Joshi has set into motion a process of change across B-schools. He has exposed the weaknesses in the IIMs. Now the administrators are working to correct some of them. Agrees Anil Gupta, IIM-A professor, "Recently, we organised a colloquium to dwell upon the lessons we have learnt." Similarly, Shekhar Chaudhuri, director, IIM-C, feels the episode has "forced us to think more explicitly about going global and internationalising our institutes".

When Joshi proposed a huge cut in IIM fees, his contention was that it would enable poorer students to get entry into these institutions. The professors and the alumni denied this saying there were enough "financing options" available and that the students could repay the loans from the fat salaries they would earn. Still, the debate has prompted IIMs to increase the number of scholarships to financially weaker students. Says IIM-C’s Sinha: "We now take a generous and liberal view on scholarships."

Until last year, IIM-C gave just 14-16 scholarships, or a cumulative amount of less than Rs 10 lakh. This year, the number of scholarships is likely to go up to 70, or an amount of Rs 50 lakh. IIM-B’s Gowda says that the alumni, who supported the anti-Joshi campaign, have also come up with offers of scholarships for needy students. "We need to seize this opportunity and build on this support," he says. Adds IIM-B’s faculty member Rishikesha Krishnan, "The scholarships were always there, but we have fine-tuned procedures and now give it more publicly. There’s a fresh new perspective on economically disadvantaged students".

An added advantage is current HRD minister Arjun Singh’s decision to abolish the concept of Bharat Shiksha Kosh, blueprinted by Joshi. As per the latter’s policy, all donations—from alumni or corporates—to specific institutions like iits or IIMs would go into a common pool. And the HRD ministry would decide how the funds would be used. That scared a lot of donors, who were unsure whether the government would use the money effectively and efficiently. Now that the plan has been shelved, donors may be more forthcoming on financing needy students, or to improve education quality.

However, the biggest change that one will witness over the next few years is an attempt by the top three IIMs —A, B & C—to become stronger in financial terms. "The general indication from the new government is that we should stand on our own feet. And we are free to seek donations to attain self-sufficiency," explains IIM-B’s Krishnan. Asish Bhattacharya, professor, IIM-C, supports this. "We need a new revenue model and management of the corpus is now our greatest challenge," he says.

With the HRD ministry also making it clear that more grants are likely to go to the new IIMs (L, K & I) and other B-schools—rather than to A, B & C—the latter trio will need to generate more revenues. It will need to seek more donations and "concentrate more on increasing revenues from consultancy services, long-term specialised management programmes and hiking the batch strength". Adds IIM-C’s Bhattacharya: "We are also talking about how to tighten our belts and spend more judiciously."

What’s important is that the Joshi episode has suddenly brought the alumni, faculty members and students closer to each other. In addition, it has increased both communication and interaction between the six IIMs. Finally, several industry leaders and senior managers have realised the importance of helping the IIMs to chart their independent paths, away from the clutches of politicians and bureaucrats.

In this atmosphere, there’s a feeling that a medium-term strategy should be in place, both at a macro level and at the level of each institute. IIM-C seems to have taken a lead in forming a faculty committee whose job is to decide the direction that the B-school should take in the next few years. Other IIMs are getting together to formulate how they can minimise future interference from the HRD ministry. "IIMs have always been autonomous institutes that framed their own policies, designed their own structures, set their own standards, offered their own careers and had nothing to do with politics," explains Debasish Chatterjee, a faculty member at IIM-L. As IIM-A student Sharma puts it: "A long-term mechanism should be devised, some guidelines should be promulgated to ensure that the institute’s basic autonomy is not affected by the whims and fancies of politicians."

Despite the winds of changes sweeping across IIMs, it’ll be fair to say there’s a certain sense of cynicism, especially among the students. Both against Joshi and the current HRD minister. Hear some of the voices emanating from the hostels. "Joshi perhaps went ahead with his policies merely to gain some attention and popularity," says Nidhi Goel, a second-year student at IIM-L. Adds IIM-B’s Mahandru, "Arjun Singh is just playing safe. Probably he doesn’t want to antagonise the IIM elite or offend the likes of Narayana Murthy (chairman of Infosys and on the IIM-A’s board of governors). The IIM directors too are more cautious now as they have learnt the hard way that they cannot trust politicians." But then who knows what will happen tomorrow?