The Council's resolution, though tacit, has a degree of assurance this time on lifting of sanctions if Iraq can satisfy the UNMOVIC. 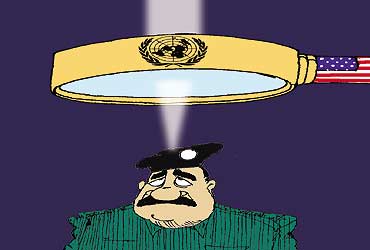 outlookindia.com
-0001-11-30T00:00:00+0553
The Iraqi government's decision to overrule its parliament and accept UN resolution 1441 has not only staved off the threat of war but also given the world a chance to establish that the new post-Cold War international order will be ruled by law and not by brute force. The parliamentarians' rejection of the resolution was just a reflection of the deep anger and hurt of the Iraqi people.

They were especially angered by the resolution's tone, the fifth paragraph of which was a barely veiled threat—member nations will be authorised to use force if the Council is not fully satisfied. Every succeeding paragraph puts the blame for the failure to complete weapons inspections (begun in 1991) on Iraq when, since '98, most of it must rest with the US and the discredited chairman of the erstwhile UN Special Commission on Weapons Inspection, Richard Butler.

For a nation that has seen economic sanctions kill more than half a million children, push a third of its population below the poverty line and deprive 65 per cent of safe drinking water, this is rubbing salt into its wounds. The anger of the Iraqis is therefore understandable. But fortunately for them better sense prevailed in the government, which realised that the purpose of the resolution—drafted almost entirely by the US—was precisely to provoke Iraq into rejecting it. To do so would therefore have played into the hands of US' 'sunshine warriors'.

Iraq's government now needs to go behind the tone of the resolution and focus relentlessly on its content. It has been given one unambiguous, final chance to avoid a brutal one-sided war that will take thousands more of Iraqi lives; and to end the economic sanctions that have inflicted untold suffering on its people. Unlike its predecessors, the current resolution has laid down a precise list of what the Iraqi government needs to declare and the UNMOVIC (the UN Monitoring and Verification Commission set up in '99) to certify as destroyed. It has also laid down a precise time-frame for verification, thus removing much of the ambivalence that had bedevilled the unscom activities, causing repeated confrontations.

The precise time-frame means that despite the absence of a commitment to lift sanctions in the resolution, Iraq has a good chance of seeing the sanctions regime end 112 days from November 8, or shortly thereafter. Although tacit, the resolution contains a higher degree of assurance that the sanctions will be lifted if Iraq satisfies the UNMOVIC. This is anyway more than what Kofi Annan was able to furnish in his agreement with President Saddam Hussein during his visit to Baghdad in February '98. The assurance then did not have the backing of the US government. This resolution, by contrast, does have that backing, as the US is a party to it.

The key doubt that Iraqi policymakers must no doubt be battling with is, can the UNMOVIC and the US government be trusted this time? Based on their '98 experience, they have cause to distrust both. Throughout '98, Butler prolonged the inspections in close consultation with the US, refusing to give Iraq a clean bill of health on one pretext or another. Each time Iraq thought it had complied with the unscom's requests, Butler presented a new demand. Eventually, Iraq understood the game that Butler and the US were playing and did the only thing left in its power to do—suspend cooperation with the unscom. The US and the UK then used a cooked up final report by Butler, and a unilateral, unacceptable interpretation of the March 2, '98 resolution, to start bombing Iraq. As the prevailing paranoia demonstrates, this bombing did nothing to allay fears or suspicion, but it was continued for a full year till, believe it or not, the worthy allies ran out of targets!

This time there is reason to expect things to be different.First, while the current resolution echoes the March '98 one in warning Iraq that it will face 'serious consequences' if it violates its obligations, paragraphs 4, 11 and 12 explicitly leave no scope for unilateral military action without a further determination that Iraq is in 'material' breach of its obligations. And this will not be done unilaterally by the US but by the Council. This limits the scope for the US to create pretexts to justify an invasion of Iraq.

Amore important reason why Iraq should give the Security Council its wholehearted cooperation is the fact that it will now be dealing with Hans Blix, ex-head of the International Atomic Energy Agency (IAEA), and not with Butler. To see what a huge difference this could make, it has only to cast its mind back to the period when the unscom was headed by Rolf Ekeus. During Ekeus' six years, Iraq's relations with the unscom were seldom smooth: given the efforts Iraq was making to hide its weapons of mass destruction programmes, that was hardly surprising.

But Iraq never had to worry about the unscom not respecting its sovereignty, and its security was compromised only because of the unscom's unavoidable reliance on western intelligence agencies and Israel to ferret out its wmd facilities. Ekeus was also scrupulously fair. In April 1997, shortly before he stepped down from unscom's chairmanship, he reported that "not much is unknown about Iraq's retained proscribed weapons capabilities".

By contrast Butler lied repeatedly, telling the Security Council in April, August and December '98 that no progress was being made when he was reporting exactly the opposite to diplomats in Baghdad and the European capitals. Butler not only became a willing pawn in US disinformation operations designed to prevent the lifting of sanctions, but was finally caught taking dictation from the US permanent mission in New York before submitting his report to the Council.

In contrast, Blix is not an Australian political wannabe, but a seasoned UN civil servant with impressive credentials. He can be relied upon to give Iraq a fair chance to convince the UNMOVIC that it does not retain WMDS, or to come clean on the few that it does.