He gave us his declamations—and his uniquely polyglot, singing sitar 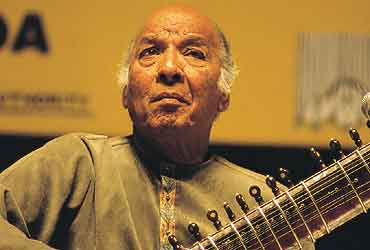 outlookindia.com
-0001-11-30T00:00:00+0553
With Vilayat Khan saheb's passing away, what I always adored as the best of sitar has disappeared from my horizon. I've heard Vilayat Khan saheb since I was 15, he was about 20 then. And I watched him attain dizzying heights, hitherto unprecedented. His command over the instrument would leave me breathless, wondering if it was not a part of his body. He could do anything he liked with his sitar. The degree of, tayyari which he achieved led everyone else scrambling after him. But, for Khan saheb, mere tayyari was not enough, it took with it the accuracy of notes, overpowering musicality and the consistency of his raga logic to its limit. He could coax his sitar to sing, cry, coo and even shout, as and when the necessity arose. The directions and directional changes of his taans were unpredictable and full of surprises.

Over the years, he had developed a unique tonality, which, both in his music and in real life, made him stand in an unattainable position not just in today's music world but also among the veterans of Indian music. The quality and the variations of tonality he had mastered was something that has not been matched till date. This puts him truly above everyone else, in a class of his own. This unique tonal quality in his playing of the sitar would remind his audience of a speaker who is not just extremely powerful but also had a careless abandon about him.

Beyond music, another unique tone was associated closely with him. One which carried on relentlessly and ruthlessly, a scathing criticism of the system which did not give genuine performers like him their due share of limelight. Yet, he shone with undiminished brilliance in the realm of Indian music. This earned him great friends but even greater jealousies in musicland. He was a man of burning self-respect and great self-pride—qualities that made him the great confrontationist who refused his Padma awards. And when such a man speaks, the command which is invariably present in his tone prevailed in the sound of his sitar too.

Our family had a special bond with him because my father was a great admirer of his father, Ustad Inayat Khan, who used to take him to all his important recitals whenever possible. When I was about eight or nine, I had been to Gouripur, the estate of the Roychoudhurys (a well-known landlord family of Bengal to which belonged the great musician Birendrakishore Roychoudhury), to listen to Khan saheb's father. Inayat Khan's sitar pervaded all of Gouripur and the enamoured Roychoudhurys made him the state musician and gave him a house where he lived for the rest of his life. Since Inayat Khan died, when Khan saheb was only 13 or 14, my father lost contact with him for quite a few years.

I saw and heard him first when he resurfaced in our circles as a fine young man of about 20 and as an outstanding musician. He played at our house on 12, Wood Street, Calcutta, accompanied by the legendary Gnanprakash Ghosh on the tabla in the presence of quite a few intellectuals of music of Calcutta and swept everybody off their feet. When Khan saheb heard of our family's closeness to his father, he became an intimate family friend and often visited our musical adda at Wood Street where my guru Radhikamohan Moitra and many other musicians of Calcutta, including Gnanprakash Ghosh, gathered regularly. He had a passion for singing and had a collection of beautiful compositions. During his concerts, he often sang quite a few priceless Bengali ragapradhan compositions by Ghosh to the accompaniment of my mother's pedal organ which he himself played.

Gradually, Khan saheb was everywhere and, therefore, our meetings were fewer. But the intimacy and bonding survived undiminished.Once, during a family function in his Calcutta home at Meher Ali Lane, he invited us for a night-long soiree and made me (then only a beginner) play before great luminaries like Ustad Amir Khan and Ustad Ali Akbar Khan and followed, needless to say, by an out-of-the-world dinner featuring the famous biriyani of his house.

All said and done, I would credit him with equal degrees of romanticism and blazing virtuosity befitting a classicist. After losing his father and guru at a tender age, he had fought and struggled against fate to maintain his cool determination to move forward and having faced various obstacles, grew up to be an uncompromising and daring personality. I remember, he was once criticised on certain aspects of his playing by an elderly critic. He responded on the microphone: "Very well dada. I have heard you. Now let us see which one is mightier, your pen or my mizraab." The proof is more than evident.

(The author is a renowned sarod player.)