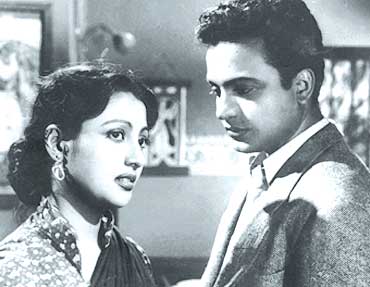 outlookindia.com
-0001-11-30T00:00:00+0553
A marvellously versatile actor, he could charm the birds off the trees. The epitome of feminine poise, she possessed a million-watt smile. Together, they were the last word in Bengali screen romance. Does romance in Bengali cinema begin and end with the legendary Uttam Kumar-Suchitra Sen pairing? It doesn't. For it has produced several other successful star duos—Soumitra Chatterjee-Aparna Sen, Soumitra-Tanuja (the Hindi actress had a fruitful stint in Calcutta in the 1960s), Tapas Pal-Debashree Roy, Prosenjit-Rituparna Sengupta and Jeet-Koel Mullick. But no one's ever been as gloriously blessed with screen magic; none at all in the league of 'Uttam-Suchitra'.

The pair ruled the box office from 1953, when they were first cast together in the riotously funny Sharey Chuattar (Seventy Four and a Half), till the early 1970s. The screen chemistry Uttam-Suchitra shared in a string of romantic, tragedy-tinged melodramas defined the parameters of the genre. They remain the benchmark to this day, even if, thanks to the gyrations of Jeet and Koel, romance sways to a completely different beat in contemporary popular Bengali films.

But let us begin where it all probably began—in a lingering lip-lock that shocked Indian moviegoers in the early years of sound. The film was Karma (1933), and the screen couple—Devika Rani and real-life husband Himanshu Rai—had their roots in Bengal. Devika Rani was a grandniece of Rabindranath Tagore, while Rai, scion of a wealthy Bengali family, knew the poet as a student.

After that, romance in Indian cinema turned coyly suggestive, and censorial control clamped down on overt displays of passion. It was not until 1981 that a Bengali actress was seen kissing on screen, in another English-language film—Aparna Sen's 36 Chowringhee Lane. Debashree Roy scorched the screen in this film in a lovemaking scene with Dhritiman Chatterjee, but they were in a zone clearly outside the sphere of conventional Bengali cinema with its credo of understated romance.

That subdued strain has its roots in the 1935 bilingual Devdas, the Bengali version of which had director-screenwriter P.C. Barua in the role of the eponymous, melancholic hero. For years afterwards, romance in Bengali cinema was soaked in tragic foreboding, until a luminous Uttam-Suchitra set it free with their bewitching tales of classic star-crossed lovers striving to rise above their destiny.

As a dashing, motorbike-borne Uttam Kumar sang Ei path jodi na shesh hoi (If this journey were never to end) in Hemant Kumar's velvet voice to a youthful, pillion-riding Suchitra Sen in Ajoy Kar's Saptapadi (1961), they struck a chord in the collective romantic yearning of the masses. Theirs was indeed an ethereal journey that Bengali movie audiences could never get enough of.

With a row of superhits, Uttam and Suchitra became the very embodiment of a million amorous fantasies. If Bollywood had Raj Kapoor-Nargis, Bengal was forever enamoured of Uttam-Suchitra. For fans, the pair was on par with, if not better than, Hollywood's William Powell-Myrna Loy or Humphrey Bogart-Lauren Bacall.

Suchitra tasted success with other actors—notably Soumitra Chatterjee (Saat Paake Bandha, 1963) and Basanta Choudhary (Deep Jwele Jaayi, 1959)—and Uttam delivered hits with other leading ladies, but it was opposite each other that they gave, and looked, their best. Suchitra faded away in the 1970s and Uttam died prematurely in 1980. With them, true romance all but vanished from Bengali cinema.

A Jeet-Koel starrer currently in the theatres is titled Saat Paake Bandha. But that's where its similarity with the 1963 classic ends. The new film is a reworking of Bollywood's Hum Aapke Dil Mein Rehte Hain. The world has donned other, different garbs, and romance on the Bengali screen has veered off the winding road that had once let Uttam-Suchitra glimpse love's roseate possibilities.

(The author is a freelance journalist specialising in cinema.)

Pirates Of The Arabian